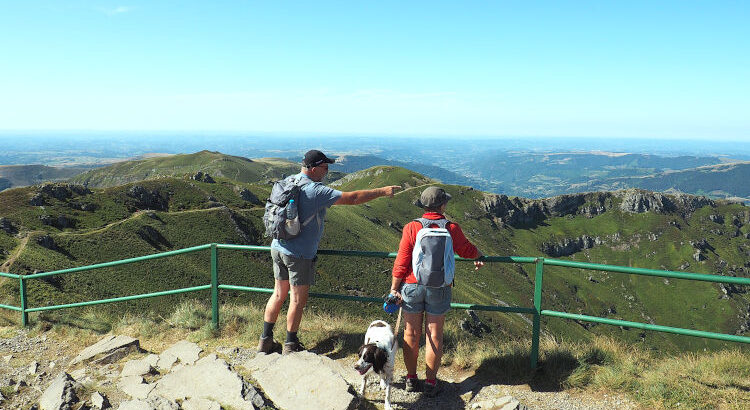 Le Lioran is a small mountain resort in the heart of continental France. It consists of the original settlement of Le Lioran in the valley bottom as well as four other settlements, all of which are geared towards the mountain tourism market. The largest of these is the Prairie de Sagnes, now known as Super Lioran, which is where most facilities and accommodation are concentrated.

We were parked in a motorhome parking area, just below Super Lioran, which is in a stunningly beautiful mountainous area. We met up with our friends Paul and Sue again who come here a few times every year in the winter to go skiing. This, however, was the summer and we were here to see the mountains and do a little walking.

We took the main lift up to the top of Le Lioran mountain with Paul and Sue and the views were breathtaking.

Whichever way you looked it was very very beautiful and the weather was sunny with very little wind so it was just great to be on top of a mountain.

And right up on the top were cattle enjoying the grass without any snow on it. And guess what they had those bells on them which is always a cool sound, but not as cool as the huge bells on the cattle in Switzerland.

And then we started to make our way down the mountain. We’d done this quite a number of times on our previous European Motorhome trip in 2002 in Austria and Switzerland. That walk down the mountain is a fun thing to do and something we love to do.

Paul wanted to walk down one of the routes that he had never skied down before so he could check it out for this coming winter. It was one of the more extreme routes, a black slope. It had tight 180 degree turns and in parts, it felt pretty steep. And what amazed us was all the big rocks and even boulders that were lying around on and near the slope that would have to be covered in a good coating of snow to not get severely injured if you fell while skiing.

Sometimes in the skiing season, there is very little snow on Super Lioran so the resort installed 240 snowmaking cannons.

And then we saw some more cattle just relaxing in the sun.

And there’s the ski lift illuminated by the sun.

And right near the bottom Sue slipped down and did some limbo dancing at the same time.

We had a really good time and a lot of fun that day taking the easy way up and the scenic way down.

We were parked where the red arrow is shown above at coordinates 45.086865, 2.748758. The parking was free and there was tonnes of room for lots and lots of motorhomes. There were no motorhome facilities like electricity and water but it was definitely one of the most scenic places we’ve parked on this trip so far.