Saumur chateau and Turquant in the lovely Loire valley 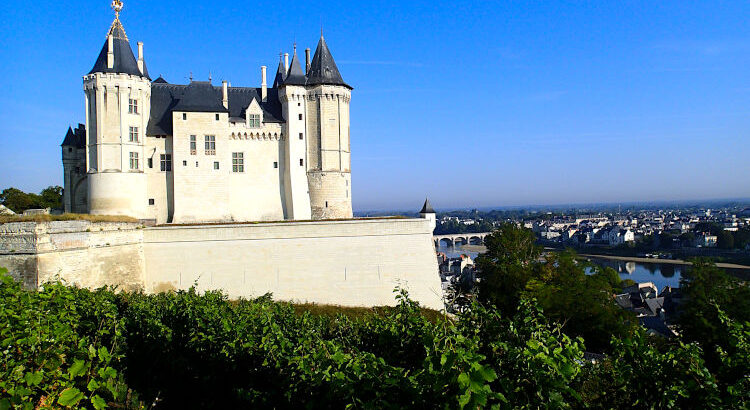 Ah, the lovely Loire Valley. A favourite of royalty for hundreds of years, it enjoys its own microclimate where the weather never gets too hot or too cold. It was on a clear sunny and pretty darned hot day that we found ourselves at the western end of the Route Des Chateaux for a visit to the charming town of Saumur.

As you approach the town of Saumur, sitting right there on the Loire river, you can’t fail to notice the dominant chateau perched high on the rocks, protecting the town below. It’s imposing position gives clear views up and down the river and across the countryside for miles.

It was originally built in the 14th century but it was not until the 15th century that it was made into a comfortable residence fit for nobility by Duke Rene d’ Anjou.

In all those years since it has frequently changed hands and had a varied history, been the governor’s house and even a jail before the town bought it in 1906. The town actually restored it and made it into a tourist attraction, as it is today. It has perhaps the most imposing position of all of the chateau in the area as it dominates the river Loire and gives impressive views across the landscape.

We heard that the inside of the chateaux was nothing like it had been originally and all the furniture had been sold off, so we decided not to visit the chateau. There is just SO much to see in the area so you have to pick your highlights or it’s likely you’ll be overwhelmed by all there is to see and get a bit jaded from chateau overload.

Instead, we decided to stroll down the hill and check out the medieval backstreets and the lovely buildings. Saumur is a lovely town, and is presently being worked on in the large pedestrian area to give it an update.

In the centre of town was the Place St Pierre with the grand Eglise St Pierre church in the prominent position.

The church inside was mainly plain and unadorned but it had several very interesting modern windows.

The modern part of Saumur had lots of pretty streets to walk around, lots of pedestrian areas, nice looking shops with a mix of affordable, mid-range and boutique stores and a LOT of estate agents.

We stayed 6 miles (10kms) down the road at the pretty and ancient village of Turquant and then drove into the Saumur in the van, and parked at the chateau parking to look around. There is free parking at the Saumur castle with spaces large enough for motorhomes, but do get their early to grab one of those spots.

We tried to park in the official motorhome parking near the village but it was full when we arrived, so we stayed in an overflow field just down the road which was much much better. Nice and shady for the hot weather and very quiet there.

Right next to the field where we stayed there were lots of other fields with horses in. They definitely like pieces of apple, but Deb was a bit freaked out feeding them.

There was also a donkey which was adorable. Deb was much happier feeding him and we gave him as many of the pieces of apple as we could.

We came back to Turquant a few months later but this time it was rainy so the field was not a good choice. We actually got a place on the hard standing official motorhome site.

Turquant is one special place. Turquant is filled with caves and those people who lived in these caves were called troglodytes. We had a great walk around the village this time and got to see how heavily involved in grapes the local farms were.

Again upon the hills surrounding Turquant they were everywhere.

And we even got to see one of the farmers do some grape picking the modern way! This was a fascinating machine to watch as it carefully manouvered through the lines of grape vines and violently shook them to the grapes fell into the machine and then we emptied into a lorry to be taken just a few yards into the village for processing.