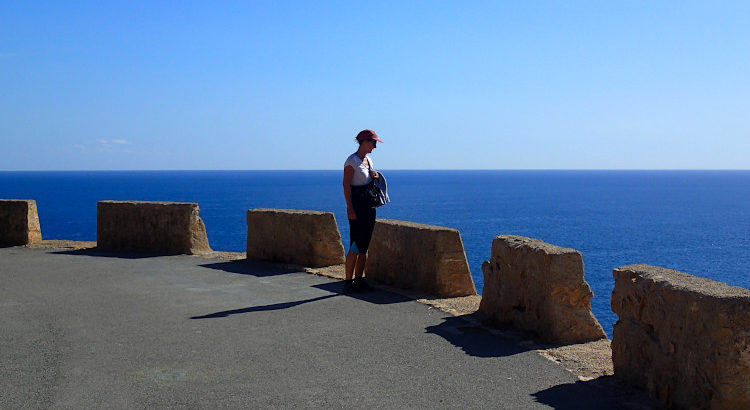 We were surprised when we were in Benidorm recently just how many really great walks and hikes there are in the area. Off to the one side of Benidorm is the Sierra Helada National Park with towering cliffs and sheer drops should rock climbing or abseiling take your fancy. But for the less adventurous there are some great walks of varying degrees of difficulty. For our walk this afternoon we’ve chosen a nice easy stroll up to the Punta del Cavall ruined tower, known as the Blue Route, or Route 3.


To combine sea and mountains has never been easier. With 300 cliffs and more than 5,600 hectares, the natural park of Sierra Helada, the first marine and terrestrial park of the Valencia region,  rises majestically behind the Mediterranean.

Starting from Levante beach (the busier beach in Benidorm), follow the road up on the left hand side towards the headland and the hotel Benikaktus. The walk along the coast road here is very nice, although a little steep in places, but affords great views over the beach and town.

Eventually the traffic curves around back inland (the road is one-way), and you can carry around a little further to the right to get to a small gravel car park at the start of the walking trails. We drove up to this point on our scooter, but you can get there by car or taxi if you don’t want to walk all the way.

From the car the start of the walk to the ruined tower is signposted for Punta Del Cavall. The pathway is wide and paved and follows the edge of the headland in a series of gradually increasing curves. It’s a gradual climb suitable for all levels of walkers, and can even be managed in an electric powered mobility scooter for those who aren’t able to get there under their own power.

At each turn you can enjoy views down into secluded coves, up to impressive coastal properties, striking views of the beach and town, or of the cliffs dropping steeply into the sea.

At the end of the route is the Les Caletes , also known as Torre Seguro or Torre Punta del Caval. Declared a National Heritage Site and to be of cultural interest, the tower was constructed under orders from Felipe II in the 16th Century to protect the village from pirate attacks. It was restored and conserved in 2018 and a set of wooden stairs gives easier access to view the tower ruins and the information board there – in English.

The tower stands about 6 or 7 metres tall and about 8 metres across the diameter. Until fairly recently you were able to drive right up to the tower, but knowing how close the road is to the edge, how narrow it is, and how steep the drop is, it’s not somewhere I would want to take a car! Best left to the walkers and runners these days.

The route is about a round trip and can be completed in an hour. Be aware though, that there very little shade and no water along the route so be sure to take a drink with you and take suitable precautions against the heat of the sun.

If you are walking up from the beach, you can return by the same route. If you are driving or on a like we were, follow the one-way round system as it continues to climb upwards for stunning high views over Benidorm, before winding way back down again. Stop where there are some holes cut in the fence and you can poke your camera through to get some great photos of the bay.