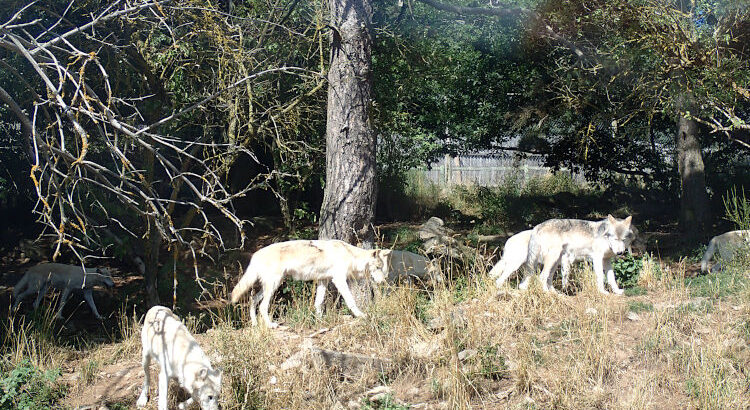 Marvejols is a medieval town located in the Massif Central – a highland region in the centre of Southern France. Marvejols was strengthened during the Hundred Years War against the English and then again at the time of the French Wars Of Religion when the town walls were reinforced.

But, having sided with the then Protestant Henri of Navarre, the future King Henry IV of France, the town was besieged and burned to the ground by the Catholics. Henry had it rebuilt in 1601 in recognition of the town’s support for him.

La Porte du Soubeyran, a town gateway dating from the fourteenth century, is one of two large medieval gates that survive to today. La Porte de Chanelles is the other gate to the south of the town, shown in the first two photos of this post. Despite some 17th-century repairs, they still keep their medieval charm.

We stayed in a free car park close to the first gate and next to a lovely river. That river had a lot of ducks, a lot of quite noisy ducks. Probably the most ducks we had ever seen in one place.

This was the view out of our back window. Can you see any ducks?

And in the morning it was time to go visit Les Loups (wolves) at the wolf park of Gevaudan. They have over 130 wolves living in a semi-freedom state in fifteen hectares of hills above Marvejols, which actually used to be renowned for the animals when they still roamed wild in the area.

The park was created by Gerard Menatory and they now have Les Loups from Mongolia, Poland, Canada, Siberia and the Arctic. The wolves have plenty of space to move around in which these photos really don’t show as we were trying to get good close up photos of the wolves.

They have very large enclosures with high wooden fences and perspex windows here and there, or raised viewing platforms to look over the fences and try to spot the wolves.

While you are at the park you can go on a guided tour with a specialist guide (sadly none in English) or you can just tour the park yourself. We toured ourselves but weren’t far behind the guided tour because they used something to bring in the wolves just at the right time.

The wolves seemed to have worked out when the guide was coming, according to the timetable for the tours each day. They seemed to have a great natural time clock. The bag of little pieces of fresh meat seemed to do the trick.

The trail is dotted with lots of observation areas so you can look down on the wolves and get a good look at them. Otherwise, you can look through the wire fence or the clear plastic screens.

It’s great to learn about the wolf which is now a protected species and help rehabilitate the image of this misunderstood animal, the villain in so many fairy-tales and legends.

It really is wonderful to see the wolves up close and if you are lucky you will hear them making their incredibly eerie wolf howl. We only heard them enjoying eating the meat.

However, once they’d eaten the meat and the specialist guide had moved onto the next wolf enclosure the wolves soon moved off to a large area of bushes and trees. They hid very well and definitely kept out of the sun.

The park also has museum exhibition rooms and an amazing exhibition of wolf photos.

As well as the wolves, the park is situated high up above some amazing views of the hills and valleys surrounding the park. It really is a very beautiful spot. The very steep and winding road up to the car park was very challenging in the van and the parking there isn’t really that nice. You can stay there overnight if you want to.