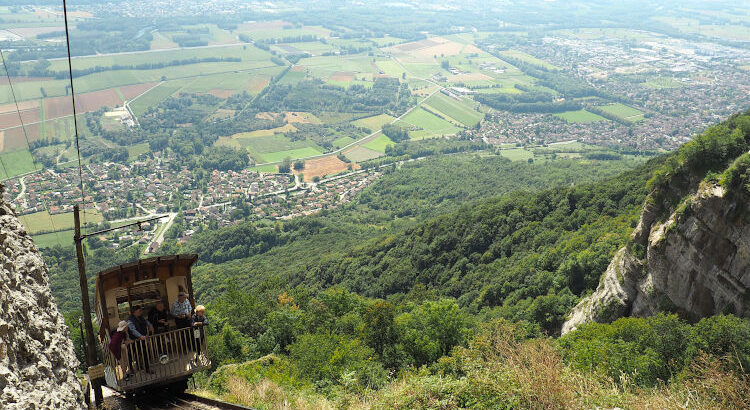 When Deby first started planning our trip she put together a custom map on Google and started adding pins. There were hundreds and hundreds of pins for all sorts of places I had never heard of. There were far, far, far more than we could ever visit in the time we had and I simply couldn’t work it out – what was the attraction of all these small out of the way non-descript towns and villages I had never heard of.

This fabulous funicular (a cog railway on a steep incline) links Montfort down in the valley to the village of Saint Hilaire du Touvet, which is 600 metres (1,969 feet) above on the Plateau des Petites Roches.

We had travelled a good ways out of our way from Grenoble to ride on one of our favourite forms of transport, a funicular railway. This one promised to be a good one. See those cliffs? Yup, we’re catching a train all the way up there.

Even the name funicular is fun. Deby was well excited! We might have elbowed a few elderly people and small children out of the way so that we got the extra special places where 4 people were allowed to ride standing on the front of the train, rather than sit inside, to get the best views and photos.

Until the funicular was built, the village of St. Hilaire du Touvet was accessible only on foot, or by mule. They can’t have had many tourists in those days. Or indeed many visitors of any kind. It’s a bloody long hard climb up those cliffs to the village on top.

The construction of the funicular was started in 1920 and it was opened in 1924, principally to serve several Cure facilities built to house tuberculosis patients.

A steep winding road has long since been opened for regular traffic, and the funicular is now used mostly by tourists and paragliders.

Exactly halfway up you get to see the other funicular car coming down as the track splits into two, so the two linked trains can pass each other.

Until 1955, the funicular was served by two 40 passenger cars. These were replaced in that year by a more modern design carrying 60 passengers each. In 1992, these were in turn replaced by new cars in a retro design, not dissimilar to the original cars. Really beautiful.

On the way up some of the views were stunning. Some people were actually rock climbing up the almost vertical rock faces, and in the rainy season and when the snows are melting the waterfalls are apparently stunning. None of them was running today.

At some parts, the angle of climb is ridiculously steep. We did, in fact, travel on the steepest funicular slope in Europe, and that’s why this particular funicular was bumped up to near the top of the list when it came to all the railway pins. The length of the track, the height of the climb and the extreme steepness of the track – the steepest in Europe.

Once we got to the top there was, of course, a queue of people waiting to go back down. You get a 20% reduction on the price on a return trip. However, one of the reasons we like to go on funiculars is that we expend zero energy going up, pay for single fares, and enjoy the long walk down through beautiful countryside. We needed our walking boots for this one!

At the funicular station at the top, we were so high that we felt we could nearly touch the clouds.

Most people travelling up on the funicular were tourists but there were also quite a number of paragliders with their big backpacks. There were two slopes that they would run down and jump off and this one was the astroturf one.

On the other side was the much more popular natural grass slope. It seemed to be very well organised rather than a free for all. There was a person on each slope with a walkie talkie talking to each other and coordinating takeoffs.

Lots of the paragliders were having a lot of fun. As we wandered down through the trees we could hear them whooping and hollering! Must be one of the loveliest places to fly, run down the grass and then launch yourself off the edge of the cliff. You also find your car waiting conveniently at the bottom.

Still very high up there were cattle grazing away on the lush grass and the sound of cowbells tinkling away in the distance.

In parts, it was quite steep but there was a decent track and we actually met one couple who were walking up and a couple of guys who ran up (mental). Yes seriously, there were people running up to the village from the train station for fun.

At one stage where the steepest part of the cliff was, we got to walk down some steps right next to the funicular track so we could wave at the passing train. And then we had to bend down and scramble under a very low tunnel under the track to the other side. We stopped and ate our sandwiches at this point and enjoyed giving our knees a bit of a rest.

Near the bottom, the track obviously became much less steep and we even got to walk next to a river with huge boulders which presumably one day a long time ago, had tumbled down the slope.

We had a great time overall and really enjoyed our drinks when we got back to the van. It had been a hot day, a little tiring, but one of our best days on the trip so far.

The price for a one-way ticket cost us €11.20 each. The funicular is open from the end of March to the end of October and there is plenty of parking very close to the funicular station, even for big motorhomes.