Our stats and expenses for Apr 2019 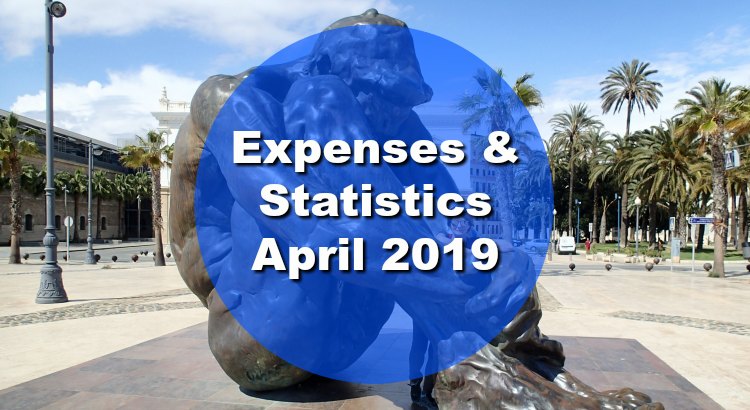 Wow, what a month. We feel like we really packed in a lot this month. Lots of great sight-seeing, some relaxing breaks at beaches and pretty locations, and some fancy British shopping which broke the budget! More on that later…

At the moment we are woefully behind in writing up our adventures so haven’t got any of our April travel written up yet. We had the best of intentions, but it seems that having the experiences is so much more fun than writing them up afterward, and we just keep on moving onto the next place, the next adventure and the next gorgeous place to stay. We will try to do better and get a bit caught up by this time next month (ha ha ha, best laid plans….)

But in April we visited:

a look at what we completed for the month of April. (Find March 2019 statistics here.)

A slight increase in mileage this month although we are still very much enjoying the slow traveling. We still stuck mainly to the coastal areas but ventured a few times inland and up into the hills. It’s still jolly chilly up there though at night and early in the day. When in Granada, we weren’t really warming up enough to take off our coats until about 3pm.

We expect to cover more during May as we make our way up through Portugal. It looks like a beautiful country, but doesn’t have so many places of interest where we have a ‘must-see’ marked on the map, so we think perhaps we’ll be going further between stops. Unless we just love the coast and continue to enjoy the relaxing beach life that is.

Camping nights – of the 30 nights in April, we spent 13 of them in paid campsite accommodation or paid parking, and 17 of them in free camping or wild camping spots. We are finding more and more that the free camping suits our needs better in a lot of places because the parking spots are closer to the areas we want to visit.

However, as the weather heats up, we will probably switch more to campsites where we can leave the van with the skylights open for the day or leave it attached to EHU and leave the air-conditioning on. Keeping the van closed up in the hot weather would not be nice for Scruffy.

Travel, sightseeing and living costs for the month

Highlights of the month

Granada for sure – bucket list item for such a long time. The Alhambra was mind-blowing. It was chilly there though. Perhaps better to visit in May than in April, brrr.

And Gibraltar. What a fascinating place. If you love military and naval history, old fortifications etc, you’ll love it here. And they have a Marks and Spencer and a Morrisons as well as British pubs, fish and chips, and everything British you could possibly need. It really is Britain with more sunshine.

We also really enjoyed the beach and wild camping in Salobrena over the Easter period. Can’t get better than free beachside camping.

Plans for the coming month

Seville is coming up, and we have high expectations for all the fabulous things to do in the city, but it could be HOT there. Already we are noticing that it may still be cool overnight, but the cities are really heating up and sight seeing isn’t quite so comfortable. But we are at out southern most point now so we’ll be heading back up north and hopefully not overheating too much.

We plan to spend most of the month in Portugal, visiting their stunning coastline as well as some of the interesting towns and cities. Very much looking forward to Sintra and Porto. Hopefully by the time we do the stats for next month, we’ll be a bit more up to date with the diary!