The Castle of Coca (not Coca Cola) 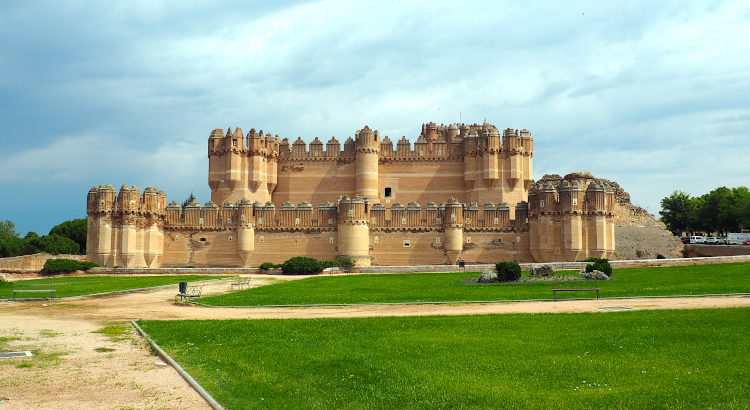 The Castle of Coca was constructed in the 15th century and has been considered to be one of the best examples of Spanish Mudejar brickwork, which incorporates Moorish Muslim design and construction with Gothic architecture. What an imposing building on the landscape.

Coca Castle is located on the outskirts of the town of Coca, about 45 kilometres (30 miles) to the north of Segovia on a slope. It is one of the few Spanish castles that have not been constructed on hilltops but has instead been constructed on a steep esplanade. It seems a little out of place these days, on the outskirts of a small quiet town seemingly in the middle of nowhere, yet was an important castle and centre in its day.

Brick has been used for most of the construction, however, the bricks used in the castle are different from ordinary bricks used to build houses. These are hardened bricks that are capable of withstanding enemy onslaught during sieges. The bricks have been laid smooth with the mortar, so the lines of the brickwork are clearly visible along with the mortar. This creates a distinctive pattern on the castle.

The castle is surrounded by an incredibly deep and wide moat that is one of its fortifying features.

It’s amazing to see this huge moat between you and the castle. As an attacker, you are at the same level as the base of the castle but then you have to cross the very deep moat and scale the walls. It has 2 gates which would have been the best places to attack, one at the front and one at the rear, both which would have had draw bridges.

The Coca Castle has a huge moat and then partly because of the depth of the moat, it has huge tall walls to scale, and its third line of defence is a massive keep.

And then protecting the small doorway into the keep is this portcullis. There is also a wooden door and in front and above that doorway way up on the top of the keep there is a hole which allows the defenders to drop rocks and boiling water or oil down onto the attackers. Coca Castle was captured by the French in 1808 and held up to 1812. It certainly wasn’t easy to get into this place.

There is one weird thing about Coca Castle which you only find out about once you get inside the keep. There are administrative buildings in there on all four sides. Coca castle was owned by the well-known Spanish aristocratic family the House of Alba de Tormes (sometimes known as the House of Alba) until the mid-nineteenth century. The castle suffered a long period of neglect that led to it falling into disrepair, and subsequently, many important artefacts were either lost or destroyed.

Coca Castle was declared a national monument of Spain in 1926 and it was nationalised. The control of the castle itself and the adjoining land was taken over by the government of Spain and subsequently handed over to the Ministry of Agriculture in 1954 when state-sponsored repairs and renovations were started. The MOA wanted to restore it so that they could open a school of forestry training. The renovations took four years, including building a Forestry School actually inside the keep.

This is most weird to see a massive ancient castle on the outside, and then modern buiuldings built around the internal courtyard, now fefaturing the agricultural college. But at least now the castle should be maintained. However, the MOA who should know all about what ivy can do to walls needs to cut down all the ivy before it really starts to damage those massive walls.

Most of the castle that could be visited didn’t have much left inside the rooms themselves as a display, but we did find this lovely scissor chair. What we didn’t know was that historically these chairs were used for women to ride horses. Can you imagine how awkward and uncomfortable that must have been for both woman and horse.

Besides the castle, Coca is also famous for the fact it was the birthplace of Roman Emperor Theodosius I in 347 CE. Known also as Theodosius the Great, he was the Roman Emperor from 379 to 395. He was actually the last emperor to rule over both the Eastern and the Western halves of the Roman Empire.

We arrived in Coca in the afternoon and stayed overnight in a free car park before visiting the castle in the morning. The car park, shown above with the black arrow, was a pretty basic gravelly thing that looked prone to flooding if you got a lot of rain. However, we spent the night there with just one other lorry driver and walked to the castle in the morning which was just 5-minutes away. The sat nav coordinates were 41.213289, -4.527839.