Getting frozen in the Roman city of Orange. 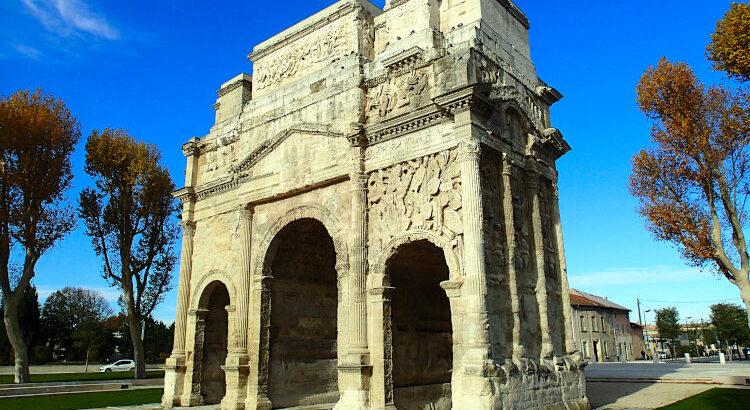 To start our tour of Orange we jumped on our moped and drove to the North of the city. Wow, wind chill on a moped in November in France was not fun. We were so cold that we kept our coats, scarves, gloves and even our helmets on while we wondered around our first Roman place of interest.

The triumphal arch of Orange is the oldest surviving triple-arched Roman arches. It was originally constructed between 10 and 27 AD, during the reign of the first Roman emperor, Augustus. It commemorated the Roman victories in the Gallic Wars and was dedicated to Tiberius in 27 AD.

Of the three arches, there’s a larger centre arch with a narrower and shorter arch on either side of the main arch. The facades of the Arch of Orange are decorated with Corinthian columns and embellished with reliefs of military themes, including naval battles, spoils of war and Romans battling against the Germanics and Gauls. A Roman foot soldier carrying the shield of Legio II (the Second Legion) Augusta is seen on the north front battle relief.

The Arch of Orange is situated along the Via Agrippa, and once made up part of the city’s defensive walls during the Middle Ages.

It was then time to get back on our moped and drive into the centre of Orange to visit the Roman Theatre. It was a very bright and sunny day, and the sun was in a bad direction for us to get any good photos. Too much strong shade across the stage, and right into the sun the other way.

The Roman Theatre of Orange was built early in the 1st century AD and is one of the best-preserved of all Roman theatres, with much of the stage area and rear backdrop remaining.

Playing a major role in the life of the citizens, who spent a large part of their free time there, the theatre was seen by the Roman authorities not only as a means of spreading Roman culture to the colonies but also as a way of distracting them from all political activities.

Mime, pantomime, poetry readings and the “attelana” (a kind of farce) were the dominant forms of entertainment, much of which lasted all day. For the common people, who were fond of spectacular effects, magnificent stage sets became very important, as was the use of stage machinery. The entertainment offered was open to all and free of charge.

As the Western Roman Empire declined during the 4th century, by which time Christianity had become the official religion, the theatre was closed by official edict in AD 391, since the Church opposed what it regarded as ‘uncivilized spectacles’. It is true that by then, with the crowd demanding more outrageous forms of entertainment, many of the performances were pornographic. After that, the theatre was abandoned completely.

Like most Roman buildings after that, it was stripped of its better stone over the centuries for reuse. It was used as a defensive post in the Middle Ages. During the 16th-century religious wars, it became a refuge for the townspeople.

One of the most iconic parts of this structure is the grand exterior facade, which measures 338 feet (103 meters) long and a whopping 121 feet (37 meters) high. Originally, there was a wooden roof across the theatre to protect the audience from unfavourable weather conditions. Although it is relatively sparse in decoration and embellishment, the three-story wall gives an overwhelmingly powerful appearance to the entire building. The main three doors on the first level of the facade open directly onto the stage inside the theatre, which can seat from 5,800 up to 7,300.

The stage, which is 200 feet (61 meters) long and raised about one meter from the ground, is backed by a 121 foot (37 meters) high wall whose height has been preserved completely. This wall is vital to the theatre, as it helped to project sound to the large audience. The wall is the only architecturally decorated surface throughout the entire theatre. It originally was embellished with marble mosaics of many different colours, multiple columns and friezes, and statues placed in niches. The central door is called the Royal Door and was used only by the most important, principal actors to enter and exit the stage.

The entry fee for the Orange Theatre (including an audio guide) and the Museum (over the road) was €9.50 each.

We both agreed that whilst visiting the Roman Theatre it was the coldest we have been so far on our trip. We were freezing! It really kind of spoiled our tour of the Theatre, as at times it was difficult concentrating on what our audio guide was telling us. Interesting and spectacular as it is, we couldn’t wait to leave.

For our last visit of the day, we went into the small Roman museum opposite, to warm up a bit.

There were a few nice things to see there and we found out that Roman Orange was founded in 35 BC by veterans of the Legio Secunda Augusta, the second legion of Augusta.

We stayed North of Orange just off the D11 at a very spacious place for parking our motorhome. It cost €10 a night with EHU and water included, which was a great price. It’s in the grounds of a large fruit and veg shop and farm, and very quiet there.