Segovia has one BIG aqueduct 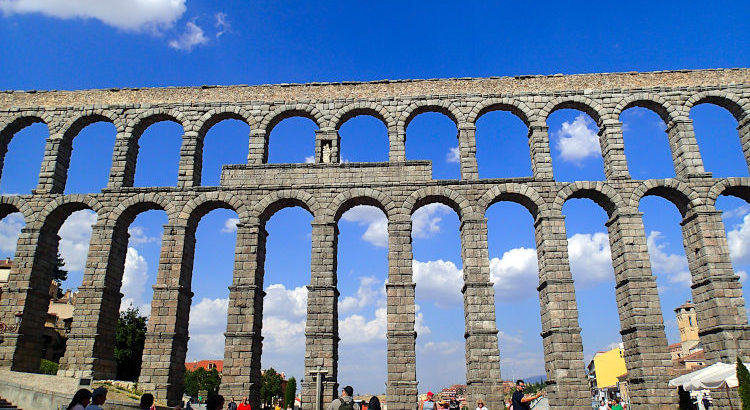 The aqueduct of Segovia has got to be one of the most beautiful Roman pieces of architecture that we have ever seen, and this one was right in the centre of the city. Let’s just say you can’t miss it!

We didn’t have to walk far from where we parked our motorhome to find the aqueduct. When we first came upon it there weren’t even any arches, so at first, we didn’t even realise we had found it. We were parked very close to the point where the water emerges from underground into a huge cistern which then channels the water around and across the city. However, it wasn’t long before the arches started to appear. Low at first, and just a single storey.

We always think of these Roman water systems as being above ground with these huge aqueducts, but of course a lot of the way the water is running through the same channel cut through and underneath the ground of the surrounding hills and it is only channelled through the above ground aqueducts when it has to pass through the space between hills on the way to its destination.

In the centre of town where the aqueduct spans two hills, the aqueduct has double arches which are incredibly impressive. It truly is amazing to think of the engineering achievement thousands of years ago. How they worked out distances, the route of the water, the exact gradient that was needed to make the water run properly over such a long distance, both above and below ground. I bet they got their urban engineering projects completed on time and on budget.

This part of the aqueduct consists of about 25,000 perfectly cut and shaped granite blocks held together without any mortar, and spans 818 meters (nearly 2,700 feet) with more than 165 arches, the highest being 29 metres (94 feet) high.

The aqueduct was built in the first Century AD under the Roman emperor Trajan (reigned 98–117 CE)  and actually transported water from the River Frio over 10 miles away from the city. The aqueduct is still working, and still in use today as part of the city’s water system. The Romans sure knew how to build something to last.

Within the walled city, there was a distribution system for the water. The details of this original system are not fully known, but it has been established that the water followed a subterranean route all around the city, much of which has been marked on the city’s pavements with the brass plaque above. You can follow a walking route around the city following the route of the water.

As we wandered around the city lots of the old parts had buildings with this lovely looking plaster stucco work. The fact that there was a gorgeous window here meant this was definitely a Deby photo as she loves her window and door frame photos.

Segovia is an ancient and wealthy city so there are many interesting anad beautiful buildings to discover. Various walking routes take you to places of interest, old quarters, cobbled streets and through its fascinating history.

There was also a very beautiful Cathedral in Segovia which was apparently the last Gothic Cathedral built in Spain. We didn’t go inside but we did spend a few lovely hours sitting outside in a cafe on the square just people watching and enjoying a few coffees for Deby and Sangrias (with ice and orange slices) for Nige.

We also visited the Alcazar of Segovia, which literally means Segovia Fortress. This is on a very steep cliff at the edge of the city and still overlooks countryside today.

It rises out on a rocky crag above the confluence of two rivers near the Guadarrama mountains and is one of the most distinctive castle-palaces in Spain. The ‘better’ side of the castle, the most impressive side, faces out over the countryside to impress visitors or maybe marauders as they approach. It’s difficult to get photos from that side because it’s usually in shade though.

The Alcazar was originally built as a fortress but has served as a royal palace, a state prison, a Royal Artillery College and a military academy since then. It is currently used as a museum and a military archives building.

Like most fortresses/castles, the Alcazar of Segovia didn’t have a whole lot of windows as windows like doorways and gates were weak points that your enemy could try and get in. However, the windows that they did have were beautiful with lots of them having stained glass in them.

Lots of the stained glass windows were of the Kings or Queens who once ruled the land and some of which actually lived in the palace.

This is the Hall of the Galley, which got its name from the fact that the ceiling is the shape of an inverted ships hull. Quite a lot of the decoration in the Alcazar has a Moorish influence and everything is very richly decorated with intricate wood and stone carvings, and stucco work.

There were many coats of armour around the Alcazar and here’s one that Deby particularly liked. This one had a nice little girly skirt. The armour, not Deby.

And this was the Hall of the Kings. A room truly fit for a King with its gilded decoration.

It had statues of each of the Kings of Asturias, Leon and Castile, still beautifully painted and preserved. The history of the Alcazar and its interior are explained on the audio guide – highly recommended if you visit.

And finally, we saw this painting. We’d never seen any painting where Jesus was anything but slim or thin. But in this painting, he is really quite tubby.

We had a great time in Segovia and particularly enjoyed the incredible aqueduct.

In Segovia, we stayed in a free car park for motorhomes by the bull ring. Thank you to Segovia council who gave us free parking and free motorhome service facilities. There was fresh water and we could dump our grey and black water. The sat nav coordinates were 40.940770, -4.108107. You can find it on our maps page.