The Roman Walls of Lugo 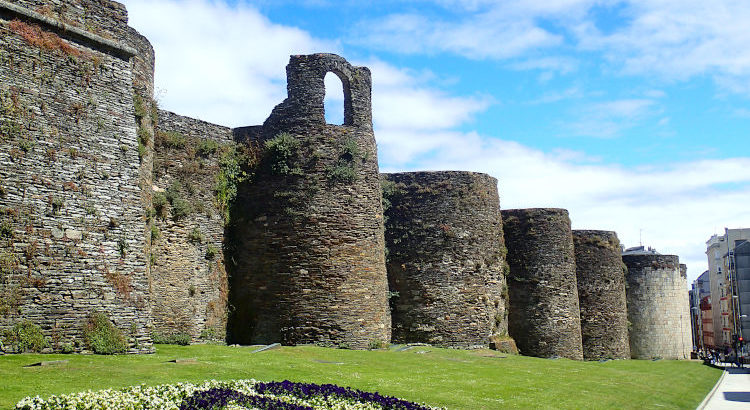 We went to Lugo for just one reason and that was to see the Roman walls, as Lugo is the only city in the WORLD to be surrounded by completely intact Roman walls.

There are ten gates in the walls including five dating from Roman times and five added after 1853 to accommodate the expanding town population.

The walls are an exceptional architectural, archaeological and constructive legacy of Roman engineering, dating from the 3rd and 4th centuries AD.

The Walls are built of internal and external stone facings of slate with some granite, with a core filling of a conglomerate of slate slabs and worked stone pieces from Roman buildings, interlocked with lime mortar.

We read an interesting fact in the museum that the soldiers guarding the wall got up to their posts by climbing wooden ladders up to about a 4-metre level. Those same ladders, if they wished, could be pulled up meaning IF the local residents of the city of Lugo rioted, or whatever, the soldiers would be able to defend themselves.

There are still 85 external towers standing which is amazing. A number have fallen over the years and been restored but not necessarily the same as before. Some are squared off, a few seem to be missing and some others have been modified or removed to make new wider gates.

What is remarkable is what you see today is in terms of the height of the towers is very different from what you would have seen when the wall and towers were originally built. In the photo above you can see partly how the towers looked.

However, in the free museum in the tourist information office, they had a model showing exactly what each of the towers would have looked like.

As late as 1960 the city council were having discussions regarding pulling the whole thing down to open up the city. Luckily this did not happen and in late 2000 the walls were added to UNESCO’s World Heritage List.

Despite their domineering size and imposing grandeur, the mighty walls of Lugo failed to save the city being seized by the Suevi (a large group of Germanic tribes) in 460 and later by the Muslims, although these days they’ll let anyone in.

And a big thank you from us to the city council of Lugo as they provided two motorhome areas where we could use the water facilities, park and stay overnight. The larger area was temporarily closed when we tried to get in but this one was open and although it was further out of the city it was still only a 20-minute walk to the wall. The sat nav coordinates are 43.02431, -7.55998.