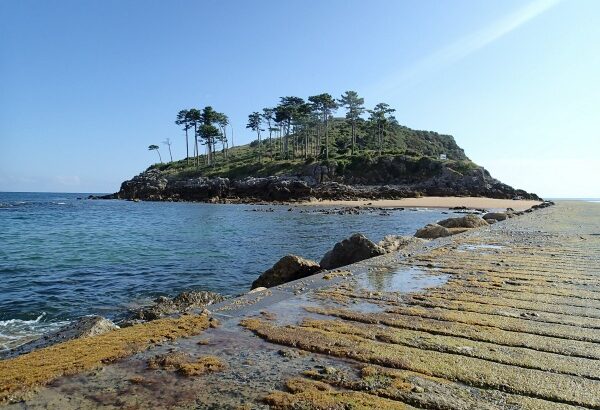 Lekeitio is a beautiful coastal town in the Spanish Basque region. It has less than 8,000 residents but in the warmer months the tourists pour in.

And why do tourists come to Lekeitio? Well, that’s because of the stunningly beautiful beaches, the quiet charming town and because it’s a real hidden gem of a place. The bay is horseshoe shaped and so picturesque with a bustling port and harbour on one side and busy cafes overlooking the water.

And why did WE visit Lekeitio?

Well, that was mainly due to the fact that they have an amazing pathway to the island of San Nicholas that you can only see and use when the tide is out. When the water comes back in, the path is hidden.

We walked on the pathway pretty much exactly at low tide and yet still in places it was quite wet and super slippery, particularly the closer you got to the island. Because it’s underwater most of the time, it’s covered in algae so when the water goes out the path is a bit of a skating rink, especially in bare feet. You have to take it very carefully.

Lekeitio also has a small marina to check out, which was mainly full of the locals small fishing boats. The little seaside town also had quite a number of bars and restaurants which seemed to be doing a roaring trade. There was also a nice coastal pathway to walk along. We had a nice relaxing time in Lekeitio, Spain.

Deby rarely if ever gets annoyed by other people but in the Lekeitio main car park, she did come quite close to punching a couple who were in a camper van. The police arrived shortly after we did at the motorhome car park to do their patrol. There are strictly laid out spaces for the motorhomes and big signs about where to park. A couple in one smaller van thought the rules didn’t apply to them so they parked across two spaces so they could get out their awning and chairs – a real no-no.

Unsurprisingly the police gave them a ticket with a large fine, and this couple thought for some strange reason that because the police turned up shortly after we did, that we had called the police and reported them. They got all weird and started taking photos of us and our van and being unpleasant. Yeah, cos it’s all about you, idiot. Rarely does Deby get annoyed by other people and even more rarely does Deby get out of her van and confront people. They thoroughly deserved Deby’s wrath.

Why is it always the young people in the small camper vans that cause so much of the trouble, park in all the wrong places and use the outdoors as their own public toilet?