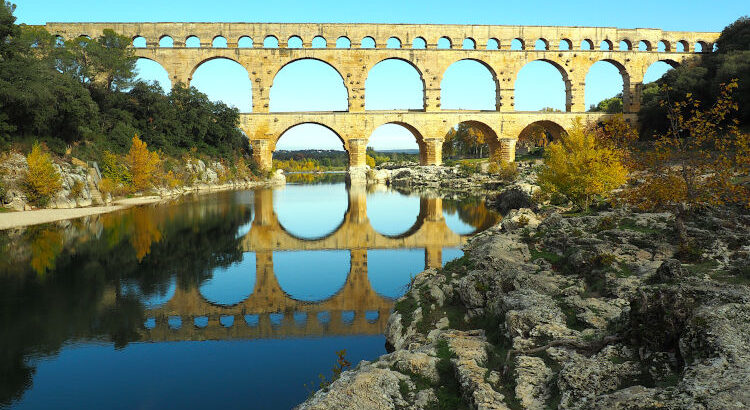 The entire aqueduct system from spring to city has several hundred meters of tunnels cut through the hills, three basins and twenty bridges, of which the Pont du Gard remains the most spectacular. Can you imagine engineering that 2000 years ago without modern surveying tools and techniques, no computers, none of the machinery we have today. At each point over the 50km, the slope for the run of the water must be exactly right or it just won’t flow. Mind blowing.

The aqueduct in itself is a masterpiece of engineering and shows the incredible skills and the unbelievable precision that the Roman engineers were able to achieve using simple technology. Not only that, but it still stands 2000 years on.

It is estimated that the aqueduct supplied the city with around 40,000 cubic metres (8,800,000 imperial gallons) of water a day that took nearly 27 hours to flow from the source to the city.

The Pont du Gard was constructed largely without the use of mortar or clamps. It contains an estimated 50,400 tons of limestone with some of the individual blocks weigh up to 6 tons. Most of the stone was extracted from the local quarry of Estel located approximately 700 metres (2,300 ft) downstream, on the banks of the Gardon River. The blocks were precisely cut to fit perfectly together by friction and gravity, eliminating the need for mortar.

The builders also left inscriptions on the stonework conveying various messages and instructions. Many blocks were numbered and inscribed with the required locations, such as “front right or front left” to guide the builders.

The aqueduct was used until the 6th century, then became a toll bridge in the Middle Ages, and finally a road bridge from the 17th to the 20th century. Yes, you could still drive over it until 1996 when it was pedestrianised. Now you can only walk across, and enjoy the countryside walks in the surrounding areas. Lots of trails to choose from, all with striking river views.

The Pont Du Gard is the most visited ancient monument in France and was added to UNESCO’s list of World Heritage Sites in 1985.

We looked at our diary from our original trip here in September 2002 and noticed that we had recorded that the entrance fee was only for the parking and the visitor centre. To go and see the Pont Du Gard itself was actually free and still is today, which is good to know. So this time we walked there from the camping and followed the footpath and went straight to the aqueduct. We got some great views with the lovely blue sky in the background and the water in the river was really still today.

The entrance to the information centre is now €9.50 per person. It was a really lovely day out because we hadn’t been able to get close or walk over the last time we were here. There had been terrible flooding and it was all cordoned off to check the bridge for safety before allowing people back on. It was nice to actually get to walk across the aqueduct this time.

Parking in the newly opened town aire run by Camping Car Parks, in the low season, was €11.46 per night including EHU. You have to charge up one of their reusable cards and use that to enter and exit. There was not many amps though. We managed to blow the fuse by having the heating and the water heater on at the same time, and then again later when Deby tried to use the hairdryer when the water heater was on. Not ideal for staying warm in the winter with those low amps. We kept the heater on low the whole night as it got down to just 1 degree! It was about 9 degrees maximum during the day. We’ve been lucky its been fairly sunny in the daytime but still too cold to really enjoy any sightseeing.

You can see our motorhome parking area in the map above where the red arrow is at coordinates 43.937944 and 4.555041. You can find all of the places we have stayed with photos and info on our maps page.