Nimes, dubbed the most Roman city outside Rome. 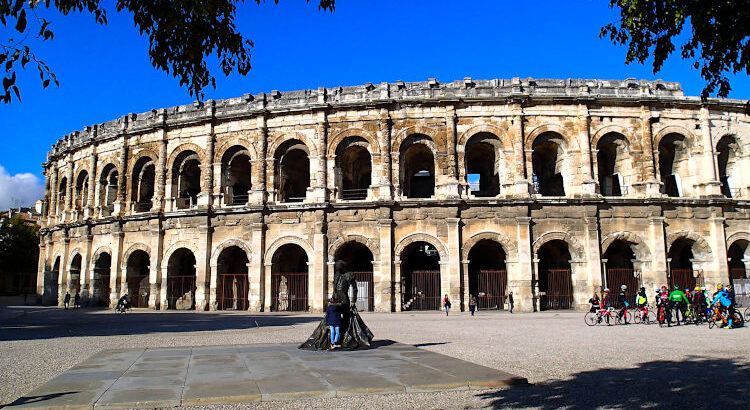 We visited Nimes in November and it was really quite chilly (actually bloody freezing if you normally live in the Caribbean). We had a lovely clear blue sky and the sun was out but it was still the middle of November in France so it was difficult to stay warm particularly in the shade. This did limit our stay and what we visited. We would have visited much more on a summer day.

Nimes is packed full of Roman archaeology and history which we have a real passion for. Besides the amphitheatre and the temple, we could have visited what was left of the walls of the ancient city. Two impressive gates, the Porte d’Auguste and Porte de France are still used today. And of the original fourteen towers on the wall, there is only one remaining which can be found at the highest point of the city.

The Jardin de la Fontaine is home to the ruins of what is thought to have once been a Roman library, and there are also the remains of Roman baths. There’s also the museum of Roman history in Nimes which we should have gone to as we are sure it would have been warmer than it was outside. Maybe.

Nimes became a Roman colony sometime before 28 BC, as witnessed by the earliest coins, which bear the abbreviation NEM. COL, “Colony of Nemausus”.

Veterans of the Roman legions who had served Julius Caesar in his Nile campaigns, at the end of fifteen years of soldiering, were given plots of land to cultivate on the plain of Nimes, so it has a very strong Roman history as many settled there.

Two thousand years ago, Nimes was one of the most important cities of Roman Gaul when the city was a regional capital, and home to 50,000–60,000 people at the time of Augustus. Augustus gave the town a ring of ramparts six kilometres (3.7 miles) long. The first Roman road in France was the Via Domitia which ran through Nimes.

So we started by checking out Nimes’ amazing amphitheatre, with the audio tour, which cost us €10 each.

Nimes amphitheatre is one of the best-preserved Roman arenas in the world; when we first saw it on our last trip to Nimes it was simply awesome. Now it is very much in use these days and holds a lot of seating above the original stone seating. There was some work going on the day we visited.

It was built to seat 24,000 people on 34 seating rows within an elliptical-shaped ring. It measures 135 metres (440 feet) by 100 metres (330 feet) and stands 21 metres (69 feet) high. It has a double row of 60 arches and was built of large stones from a nearby quarry, put together without mortar. Yup, the Romans knew how to build things to last in those days – without mortar, can you imagine that today?

We had a fabulous time scrambling about all over the place, going up and down the stairwells and listening to all the amazing facts and interesting stories through the audioguide. It was fabulous that we weren’t swamped by loads of nattering coach parties but we were cold a lot of the time.

And why has this amphitheatre survived so intact to today? Well, that is due to the fact that in the middle ages, the arena was turned into a space for housing. Houses were built up right up against its walls and even inside once the floor level had been raised by filling the centre with rubble. Essentially the amphitheatre served for 900 years as a shelter for the poor and that is what saved it, just like the Roman theatre at Orange. Useful buildings with a purpose tended to last longer than those that just looked good in the old days.

Today the amphitheatre seats 17,000 which is around 30% of the current population of Nimes. Plenty of entertainment is provided including festivals, concerts, opera, theatre, bullfights and more. Each spring Roman Games are held at the amphitheatre taking visitors back to the era of Julius Caesar. The current ones though aren’t so bloody as the originals and you can’t buy any otters spleens.

The other fabulous Roman archaeological site that we went to visit was the magnificent temple called Maison Carree. It was just a five-minute stroll from the amphitheatre to the temple. What a stunner.

The temple was placed on a podium overlooking the forum, the city’s public gathering place, and it was from the podium that public announcements were made and public ceremonies performed. By virtue of its size, the temple would have dominated not only the forum but also the city, reminding locals of the rule of Rome.

It’s one of the most beautiful monuments built by the Romans in Gaul and certainly the best preserved.

Like the amphitheatre, through the years the temple has survived by adapting. It’s been a church, stables, a town hall, a private house and even apartments. And it now houses a collection of Roman sculptures and an art gallery.

Nimes more than met our needs for seeing Roman archaeology again. We had a great time.

We stayed at an out of town mall car park that was a very short walk to the T1 bus stop, that we took into the city for just €2.60 return per person.