Cartagena – it’s all just a facade 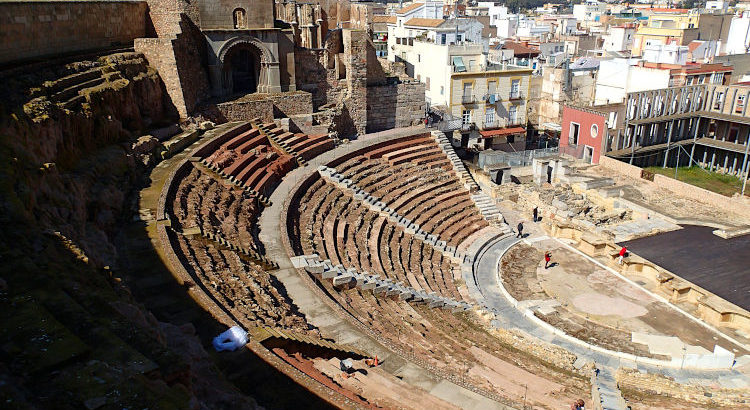 Cartagena is in the South East of Spain in the Murcia region and is very much a city with a port. Or maybe even a very important port that has a city.

When you stand on the promenade looking out to the sea you can see why Cartagena was a great place for a port. It’s set in a perfect bay with hills on either side and a small opening to the Mediterranean, making it both a safe place to anchor and making it easy to defend.

The Carthaginians founded Cartagena in 228 BC but the Romans kicked them out just 19 years later in 209 BC and the Romans were the bosses of Cartagena for 600 years. We mainly visited Cartagena to see the Roman ruins as we really enjoyed Roman sightseeing in 2002 when we went on our last European tour.

Being avid scuba divers we started our tour in the National Museum of Underwater Archaeology which was much better than it sounds. With such a rich history of seafaring, the harbour etc was a great place to find sunken ships etc.

No doubt severe storms caught out some Captains, while others sunk in battle and I’m sure the odd few foundered when the Captain had too many Vino Tinto’s.

The museum was full of all sorts of amazing finds including amphora’s, anchors (metal & stone), coins, lead ingots and tonnes of pottery and everyday household items. There were a lot of very good interactive exhibits as well as beautifully done dioramas and examples of ancient ships.

The Roman Amphitheater (or Colosseum)

We then went off to see the Roman Amphitheatre and without a doubt, it was the most neglected one we have ever seen. We were most disappointed. Well done Cartagena! It was in a disused car park area of the city, surrounded by later construction from the 60’s packed in on all sides.

What would once have been a magnificent building is now in utter disrepair and decay, partly falling down now and held up by scaffolding. From what we can understand in our terrible Spanish, it’s been closed and ‘under repair’ for a very long time now.

In more modern times it was used as a bull ring until that was abandoned and now the whole thing looks like it could come tumbling down at any minute. This is a city that is now established as a major cruise ship destination, luckily none were there the day we were there, and if only they could use some of that money to rebuild the amphitheater then it would be amazing for everyone. At present, the Cartagena Amphitheatre just looks very sad and neglected!

Next to the ruined amphitheater is the glass lift that takes you from the lower sea level near to the port, up to the park on the top of the hill – except that was out of order too.

Feeling a tad pissed off we went off to find the next Roman marvel and this time we were most happy. The Roman Theatre is beautiful. It was built between 5 and 1 BC as evidenced by the inscriptions found referring tot he grandsons of the Roman Emperor Augustus.

Amazingly it was only found in 1988 when they knocked down the ruins of the old cathedral that had been destroyed by shelling in the Spanish Civil War (1936 to 1939). The archaeological excavations and the restorations were only completed in 2003, albeit a couple of guys were working on some of the seating when we were there. Obviously, all the wooden seating is long gone so these guys were just adding a few extra concrete benches. In its day it could hold up to 6,000 spectators.

We then went for our hat-trick of Roman sites, the Casa de la Fortuna. This was underneath a much more modern house where the villa foundations etc were on show. You got to see a genuine 1st century BC Roman home.

The mural paintings and mosaics are the absolute highlight with many kinds of motifs from nature, mythology, rhomboids, stars and swastikas of all things. It’s open 10.30 to 3.30pm every day except Mondays and in 2019 costs 2.50 / 2.00 euros for adults / children. Sorry, we totally forgot to take any photo’s as we were engrossed in the visit.

Totally fascinating to see the road, pavements, sewers and water supply, and the actual Roman houses, all there still existing right under the modern city. It makes you wonder how much is still there under the modern buildings or yet still, how much wonderful ancient history was simply destroyed to make way for the city of high rises we see today.

A city in ruins!

And now for something weird. “It’s all just a facade” is the title of this post! In Cartagena there are many buildings that are either missing completely and there is a big gap (knocked down / fallen down) or just the front wall is left and is being held up by scaffolding. And when I say many building I mean lots. What’s it all about?

Here you can see how the building that used to be attached on the one on the right has been completely removed and the wall is sealed. You see this all over the city – buildings just removed and the base cordoned off. Why was it removed in this way? They seem to be fairly modern buildings so it’s not like they fell down or were just unsafe.

In England sometimes the front of an old building is kept as the developer gets a good tax deduction when rebuilding the rest of the building. That makes it a refurb instead of a new development. Or maybe they are buildings of historical significance?

None of the facades retained appear to be of any particular significance or anything special, so its neither clear why the buildings have been removed, nor why some facades have been kept. It’s very strange to see in a modern 1st world city, and it more reminiscent of a city that’s been damaged by some external factor.

Did they fall down? Where they pulled down? Cartagena was heavily bombed by the Nationalists, with the help of the Germans, in the Spanish Civil War so maybe they have never been rebuilt since the devastating bombings? Or maybe new buildings were put up in haste after the civil war and they had to be subsequently pulled down?

If you know anything about what’s happening in Cartegena, we’d love to know more. Please leave us a comment.

And finally, we had a great time walking and relaxing around the lovely port area. It’s very clean and modern with a nice open feel, wide promenades and nice art and sculpture to admire.

So Cartagena is very much worth a visit and if they can restore the Roman Amphitheatre one day, then that would just be fabulous.