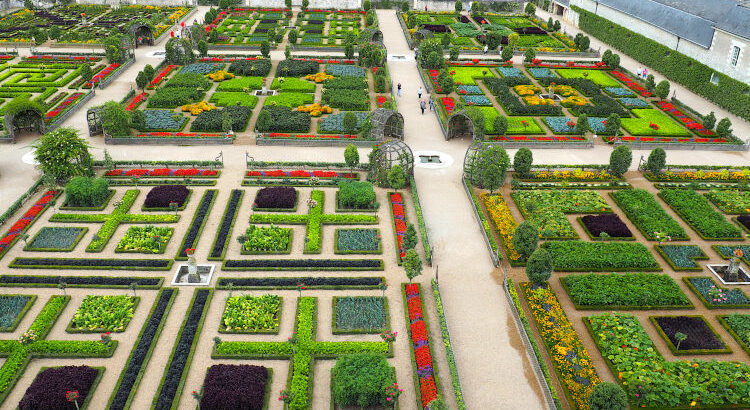 If you only have a day or two in the Loire Valley then the chateau at Villandry is an absolute must-see. Anyone who is a garden or plant lover will most likely spend far more time outdoors than inside this chateau.

One of the main reasons it’s a must-see is the gardens around the chateau are simply stunning, and famous worldwide as the perfect example of a Renaissance ornamental garden. Salads, fruits and vegetables are combined with flowers for the most stunning ornamental kitchen garden. The companion planting provides 100% organic protection against pests.

In the early 16th century, the land and ancient fortress were purchased by Jean Le Breton. He was Controller General for war for King Francis the 1st of France. At that time a new chateau was built around the original 14th-century keep, which you can see clearly in all of our photos of the chateau. The original Keep is seen here below on the right, rather clumsily integrated into the more modern chateau.

The keep was famous for a meeting in 1189 where the King of England, Henry II Plantagenet, came to admit defeat before the King of France, Philippe Auguste.

The château remained in Jean Le Breton’s family for more than two centuries until it was acquired by the Marquis de Castellane. During the French Revolution, the chateau and lands were confiscated and then in the early 19th century, Emperor Napoleon bought it for his brother.

The 19th Century marked a turning point for the property as the traditional garden was destroyed to create an English style park around the castle, as was the fashion at the time. And then in 1906, a Spanish doctor named Joachim Carvello bought the property.

He gave up a brilliant scientific career working with Professor Richet (Nobel Prize for medicine in 1913) to devote himself entirely to Villandry. He then poured an incredible amount of time and money into repairing it and creating extremely beautiful gardens.

The famous Renaissance gardens include a water garden, ornamental flower gardens, a herb garden, vegetable gardens and a maze.

The gardens are laid out in formal patterns created with low box hedges. The designs and colours are simply breathtaking. For some reason we were lucky to visit the chateau and gardens on a really quiet day when there were very few people. You can see in the photo below, it looks almost deserted.

Still owned by the Carvallo family, the Château de Villandry is one of the most visited chateaus in France. Joachim Carvello, the great-grandfather of the present owner, pioneered the opening of monuments to the public.

We arrived early in Villandry so decided to visit the gardens first to miss the midday sun.

It was then time to go into the chateau. There were lots of rooms with beautiful wooden parquet flooring. It was very richly decorated and furnished in many of the rooms with original period pieces.

This table was one of the most beautiful tables we had ever seen. It was exquisite. Not exactly our style, and we wouldn’t choose it for our home, but stunning.

Some of the bedrooms had beds which were put in recesses in the walls allowing curtains to be pulled for privacy and to keep the cold at bay. The rooms were all large and like small suites with the bed which could be closed off for comfort and privacy, a sitting room, their own bathroom and dressing room with space for clothes, and even a small office space for writing important correspondence. Again Deby delighted in the decoration and fabrics.

Here’s some more of that parquet flooring.

And Deby admiring herself in the huge mirror.

The kitchen was pretty small and basic for such a big residence. How on earth did they cater to huge banquets and fancy formal dinners in such a small space.

And if you wanted a bath then this was it! In a little alcove next to the bed was your own bathroom. Aparently the bath cover was used for modesty so you could take visitors and have conversations while you lounged in the hot water!

This incredible Mudejar style ceiling in the oriental drawing room comes from the Maqueda ducal palace, built in the 15th Century in Toledo. The palace was dismantled in 1905 and Joachim Carvallo brought one of the ceilings back to Villandry. It took a full year to reassemble this ceiling from the 3,600 separate pieces.

The chateau and particularly the gardens were a true highlight of our trip so far.

We drove to Villandry on our moped from the nice campsite with the lovely French couple. See the red arrow above with the coordinates 47.329384 and 0.480774. The yellow arrow is the Villandry chateau. There was a parking Aire for motorhomes in the Villandry village but the place we stayed down the road was much nicer and got much better reviews on Park 4 Night.