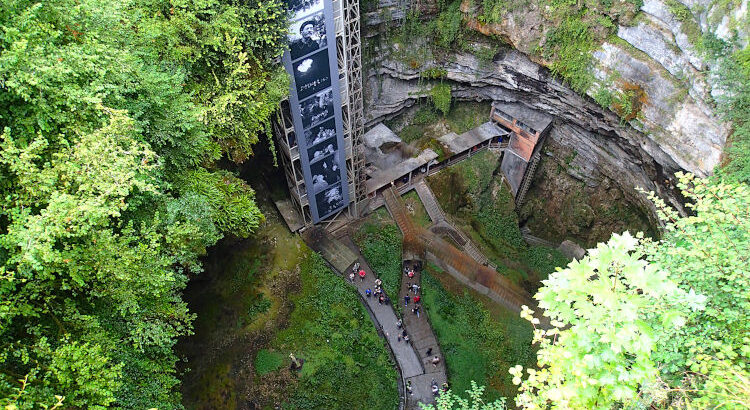 You can see why the locals originally called it ‘the devil’s hole’.

The Gouffre de Padirac (Padirac Chasm) is one of the largest chasms in Europe. It’s located near Gramat, in the Lot department, Occitanie region of France, just 5 miles (8 kms) from our last port of call at the spectacular village of Rocamadour.

The chasm itself is 338ft (103 m) deep, with a diameter of approximately 108ft (33 metres). Since the 1930s you can descend 246 ft (75 m) in a lift, inspired by the Eiffel Tower, or use the staircase before you get to the start of the real cave system. We chose to walk down the stairs to enjoy the view all the way down.

Sometime in the past, no one knows when, the roof of this huge cave collapsed in leaving this large internal cavern. It’s one hell of a sinkhole! Early records show that it existed in the 3rd century and Potassium Nitrate was mined there in the 15th and 16th century.

In modern times it was ‘discovered’ by the famous French cave explorer Edouard Martel who began exploring it in 1889. It was opened to the general public in 1899, but it was Guy de Lavaur (1903–1986) who really opened up the cave system. He managed to penetrate 9.3 miles (15 kms) of passages. The whole cave system is actually made of 25 miles (40 kms) of passages, however, Joe Public only gets to see the most accessible 2 kms.

However, one of the great things about the 2 kms that we do get to see is because the cave contains a subterranean river part of it can be toured on a boat. So you get to travel on an underground boat – how cool is that. Very Jules Verne! The small boats are pushed along by a guide with an oar who tells you about the caves and river as you travel through the underground river passages.

Sadly a lot of our photos did not come out, they were too blurry – operator error in very low light conditions. However, Gouffre de Padirac truly is an extraordinary natural phenomenon.

The whole trip all the way in and all the way out takes about 1 hour and 30 minutes. And when you are in there the temperature all year round stays at a constant 55F (13C) to 57F (14C). We wore thin coats and Nige even wore his waterproof trousers that he wears on our moped. It was very drippy and damp in there.

The whole place is full stalactites and stalagmites with the biggest stalagmite being the Grand Pendeloque which is nearly 200 feet (60m) high. You’ll also get to see Salle du Grand Dome where the roof is over 300 feet (94m) above you.

Gouffre de Padirac is the most frequently visited underground tourism facility in France, with more than 350,000 visitors every year. From the queues we had on the day, we well understand these numbers, even on a rainy day. It’s necessary to book your tickets in advance and arrive at the right time to get in. Visitor numbers are controlled to make sure you get the best visit and there aren’t huge queues for the boats.

From the picture above you’ll see where we parked our motorhome (red arrow) at coordinates 44.855254, 1.749471. And then we visited the caves a short walk away (yellow arrow). There was free motorhome parking during the day but you aren’t allowed to stay there overnight.