Lourdes and its Holy Water 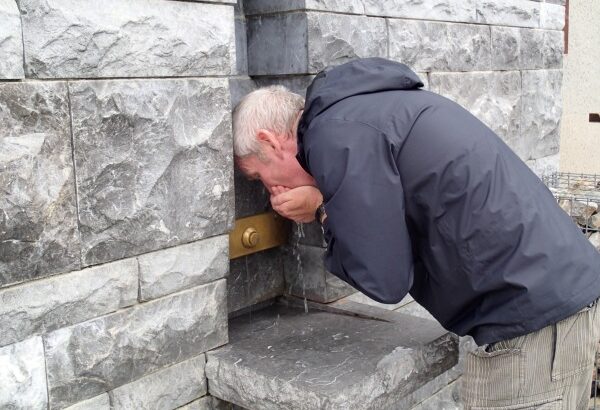 It was a bit of a grey day, weather-wise, the day we went to Lourdes. We were there with quite a few other people on the day but it wasn’t stupidly busy. Between 5 and 6 million people visit Lourdes each year. It is said of all the French cities only Paris has more hotel capacity. We were greatly anticipating a very special day here.

With the weather as it was Deby had been playing around with her camera settings. Her Olympus camera had this setting down as Lord Voldemort. (Hey Nige, don’t be cheeky, just trying to make it look dramatic. Better than your dull grey photos )

Lourdes itself is a small market town lying in the foothills of the Pyrenees. In 1858 Lourdes rose to prominence in France and abroad due to the Marian apparitions claimed to have been seen by the peasant girl Bernadette Soubirous, who was later canonized. Shortly thereafter the city with the Sanctuary of Our Lady of Lourdes became one of the world’s most important sites of pilgrimage and religious tourism. The constant stream of pilgrims and tourists transformed quiet Lourdes into the second most important centre of tourism in France, second only to Paris, and the third most important site of international Catholic pilgrimage after Rome and the Holy Land.

The Basilica of the Rosary, which is the main building that you see when you first enter the Lourdes grounds was built between 1883 and 1889.

The magnificent elliptical ramps encircle a square in which 80,000 people can gather. The square is called Rosary Square.

The front of the Basilica and in the left-hand arches of the elliptical ramps are some really beautiful mosaics and shrines.

Before we went into the Basilica we hung around outside the main door area where there were large church groups from different parts of the world. They had matching tops, banners, huge candles and all in all they were really up for this experience. The area was full of religious people experiencing sheer joy with a little bit of apprehension. There was a British group from near Manchester whose entry time in the Basilica was coming up.

We went into the church a little before their main group entered and to be honest it was underwhelming. I suppose it was just a bit too modern and just full of people just hanging about.

However, as things settled down and people took their seats we could get a better look around and parts of the Basilica were very lovely. The decoration and mosaics are stunning and without 90% of the people it could have been special.

We then left and climbed lots of steps up to the Upper Basilica, which was up on the roof of the main Basilica.

It was the second of the churches at the Lourdes complex to be completed and was consecrated in 1876. It is an impressive, elaborate building in Gothic style, with some rather strange and morbid looking decoration.

We then walked the rest of the grounds of the Lourdes complex and they were vast. The first area we came to was where you could top up on holy water. Sadly my wish for better health and less pain didn’t come true.

Some people were seriously into the water. They bought lots of plastic bottles in the shape of Mary (you could buy them from all the tacky gift shops lining the roads into the centre) and then filled them up with the holy water. I guess they took them home as presents!

There was plenty of space and loads of taps so there was no need to push and shove on the overcast day we were there. None of it claims to be holy water, or blessed, or from a spring, or anything special. It’s just tap water from the local supply coming out of the wall.

In those rows of gift shops, you could also buy some mighty big candles that looked like they could stay lit for a week or more.

Some of the candles on sale were upwards of €150 to €250 for a candle that took two people to carry it. There were a long row of these open enclosures where people would buy and light their candles.

There was also another modern building next to the river where you could pay to bathe in the healing waters. We are not sure how much that cost, however, maybe it gave you a better chance of being on the right end of a miracle. Apparently 350,000 people a year have a bath there! It appeared to be empty while we were there and I don’t suppose its a very popular time of year to be immersing yourself in this cold water.

Since 1858 the Roman Catholic Church has officially recognized 69 healings which they considered miraculous.

Our last part of the complex to visit was the Grotto of Lourdes, the Massabielle Grotto. There is said to be a healing energy present that has made the site, in only 140 years, the most visited pilgrimage shrine in all Christendom.

It’s a 31-foot wide limestone cave & religious pilgrim site that is open for silent visits. We queued for only about 10-minutes and went inside the ‘cave’ and were a little confused as to what we were supposed to be doing or looking at. It’s just a small area under an overhang of rock with nothing in it. Very strange and most people seemed to be as bewildered as we were.

We then wandered out of the site and back up the main road to our motorhome. A large part of the main road was full of shops selling what could only be described as crap plastic stuff, and hotels. Some of the shops were the tackiest we had seen anywhere in the world and we’ve been to the UK. The amount of this plastic crap that goes straight from here to the landfill or oceans every year is one area needing a miracle soon.