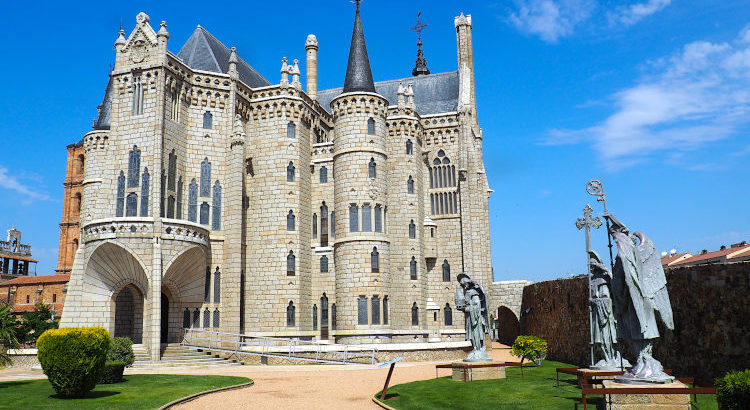 We’re huge fans of Guadi after we were lucky enough to visit many of his buildings on an earlier trip in 2002 to Barcelona. So when we learned about Gaudi’s Episcopal Palace in Astorga, we simply had to make a detour from our route to see it.

Just from the outside it is simply stunning. We fell in love with it totally. Talk about imposing! It’s truly gorgeous from every angle. Like a fairytale castle.

The arch over the doorway was built and knocked down three times before they got it right on the 4th try.

It’s perfect. Stunning, and completely worth all that effort and expense to create something so special.

Gaudi designed three enormous zinc angels that were to be positioned on top of the highest points of the roof, however, when the plan of the roof was later changed (after the budget was cut when the bishop died before it was finished), they ended up in the garden instead.

The project of the Episcopal Palace of Astorga dates back to the year 1887. After a fire in the former palace, Gaudi designs the bishop’s new residence. What an amazing place for the bishop to work and live in.

Gaudi wanted to symbolize the triumph of Christianity over the Pagan world by building a monumental palace that externally seems to be a Medieval castle and internally shares the same features as Gothic churches.
The Palace is a masterpiece in its organization of space, with Gaudi making every floor a continuous flowing unit.

In 1893 before the palace was finished the bishop died. In all of his previous projects, Gaudi had been used to working with total freedom, devising projects in an organic way while modifying plans as he went along. He seemed to work for seriously rich clients up to now but with the Episcopal Palace, he had to justify everything. It was not helped by long delays in the payment of his fees. The bishop had defended him all the way but once the bishop died Gaudi resigned almost immediately, leaving the upper floor and roof unfinished. Richard Garcia Guereta from Madrid completed the project a decade later with more modest solutions.

This is the view of the ground floor hallway type area that leads off to 5 separate rooms. The interior of the Palace is divided into 4 levels as follows:

This is down in the semi-basement which had quite a lot of natural light coming in as Gaudi had built a moat around the Palace allowing him to add windows to the semi-basement. This big column of stone in the centre of the photo is an old Roman mile marker which was engraved as 2 miles away from Astorga. We’ve never seen anything so elaborate. On all Roman roads, there were much more modest stone markers for every 1000 steps.

Throughout the whole building most of the floors were held up by stone columns and at the top of each of those columns were Gaudi’s amazingly beautiful capitals.

The main floor was the most beautiful part of the interior. This is a view of the throne room with some lovely stained glass windows and a delicious ceiling.

And in the same room this is the fireplace, which is small but just delightful.

And the view from the throne room, not the actual throne as we weren’t allowed to sit on that, into the hallway which again leads off to lots of rooms.

And then there was the best room of all the Chapel. As normal photographs really do not do it justice.

The stained glass windows were incredibly beautiful and again the ceilings were stunning.

And just one last glimpse of the room from the connecting hallway where you can see the richly coloured tapestries on the wall.

The cost of the visit was just €5 each plus another €1 if you wanted the audio guide on a tablet with an earpiece. It was 100% worth us making a detour to see this amazing piece of architecture by one of our absolute favourite architects of all time. It combines everything we love about architecture and Gaudi with everything we love about churches and cathedrals – the vaulted ceilings, the stained glass windows etc.

And we’d nearly forgotten. This was yet another old Roman town where they had built their amazingly tall and thick and impressive walls. This time just one side was left but it was still something to marvel at.

We arrived in Astorga in the afternoon with the plan of visiting Gaudi’s Episcopal Palace the next morning in the cool. So we stayed at Astorga’s official municipal Aire which was on the outskirts of town next to their Bullring. It was free to park and full water and waste services were provided for free as well. It wasn’t the most attractive place to stay but we have stayed at worse. It was super quiet at night. The sat nav coordinates are 42.45162, -6.06583.

It would have been a long walk on a boiling hot day from the bullring to the palace so as we had planned we moved closer to a car park in the town. The car park was very near the palace. From the photo above you can see our van and the palace in the distance about a 5-minute walk away. The sat nav coordinates of where we parked were 42.457332, -6.054217.