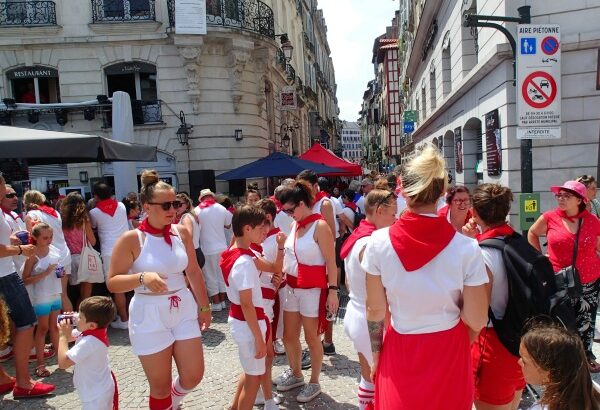 Wow, it was difficult trying to park in Biarritz. The first day we arrived Nige drove down a hill to get to the coastal road only to find yellow tape and police everywhere. It was the Biarritz half marathon and loads of roads were cordoned off, including the one where our motorhome site was. There were also big festivities in Bayonne, which was just down the road so the roads were manic.

We decided to forget Biarritz and Bayonne for the day and drove out of Biarritz to the little village of Arbonne where we spent the day and night relaxing.

We were up early the next day and went to a different motorhome site, out of the craziness which is Biarritz and about equidistance from Biarritz and Bayonne. That way we could use the moped and spend a day in each.

In February on our way down to Spain, we had shot by these towns always planning on seeing them once we had done the whole loop of Southern Spain, the whole coast of Portugal and the whole Northern coast of Spain. So we were back, it was much warmer and we were able to bomb around on the moped, which is one of our favourite things on these European tours.

After a lovely drive on the moped along the beautiful coastline, we decided to, first of all, go see a lighthouse that we had spotted. Who doesn’t like a lighthouse? Then we got back on the moped and drove down to the Biarritz beach area. Sadly although it was warm, it was completely overcast for most of the day. The photos always look so dull when the sky is like that.

It was mid-morning so there weren’t a whole lot of people around but by lunchtime and the end of the day, the pace was pretty full of people enjoying the beach and the sea. We aren’t into lazing about on beaches these days so we checked out the seafront promenade.

There were lots of beautiful Art Deco hotels which had fabulous views of the beach and ocean. I’d love to stay in one of those one day as long as the interior and rooms were authentic Art Deco but we would have to dress accordingly, no shorts and flip flops.

Just around the corner from the main Biarritz beachfront, there was a couple of little islands to check out where pedestrian bridges had been built out to them.

We spent quite a long time just hanging about watching the waves and were absolutely amazed how far out some people were swimming. Some lifeguards on paddleboards were out there checking the swimmers were all OK. For some, it was a 20-minute or more swim back to the beach, in water that was not at all warm.

We then wandered into a big shopping area where they have some lovely shops, but as we are living in a motorhome we rarely buy anything that isn’t food. We’ve bought some new clothes because we actually needed some, but not a lot else. You just don’t have much room in a motorhome for stuff!

After a quick visit to one of the smallest ports, we had ever been to, and the pretty fishermans cottages there, we headed back for the long walk back to the moped and the van.

We just forgot to take many photos of our Biarritz visit today. We had a lovely time there but not much to show for it. It’s a very nice seaside town and could almost be British in its feel, especially on a grey day like this one.

The next morning we up and out on the moped again pretty early for a trip to Bayonne. There was a five-day festival going on which dates back to 1932 and is the biggest festival in France. Bayonne got the idea from Pamplona in Spain to have a big multi-day festival, as the one in Pamplona was so successful. As normal, until we arrived in the area we had no idea it was on.

However, even before you get anywhere near the festival area it is quite obvious something is going on. ALL the locals and probably lots of tourists all wear white clothes with a red scarf and a red belt. It’s all very colourful. It was in the 1980s that everyone started turning up in white and red which are the colours of Pamplona. The official colours of Bayonne are blue and white which a few purists prefer to wear. However, red and white are colours that are emblematic of the Basque country, which Bayonne is part of.

The festival starts on a Wednesday night when the festival’s mascot, King Leon, throws Bayonne’s city keys from the town hall balcony down to the crowds below. The whole town is shut off and pedestrianised and it’s totally packed with people everywhere.

The whole area was free to get into but there was a lot of security, gendarmes and army, and there were various entry points where everyone had their bags checked.

The first part we got to visit was next to the old town where there was a massive funfair which was set up one side of a big bridge over one of the Bayonne rivers. Thousands of kids were having loads of fun.

We wandered around the medieval part of the town which had some lovely old wooden fronted houses and the bars and restaurants were packed. Everywhere was packed. The entire town and presumably most of the people from all of the surrounding towns too had come to sit out, eat junk food and drink. A good family atmosphere though.

At one stage to get away from all the crowds and noise we ducked into Bayonne’s Cathedral and what a beauty it was, particularly the red and green coloured ceilings.

It was lovely and cool in the Cathedral and there were some local nuns and novices singing although they got interrupted later by a group of male singers who wandered in off the street and asked the women to stop singing cos they wanted to do some. Cheek!

It was third time lucky for the Cathedral as the previous ones were both destroyed by fires in 1258 and 1310. Work started on this Cathedral in the 13th Century and was completed at the beginning of the 17th, except for the two spires which were not finished until the 19th century. It’s a stunner.

We then wandered around the city for a while longer until we found part of the old wall that surrounded the city and some much more modern defences. Here there were yet more people enjoying all the free festivities, singing and dancing.

Over the five day festival, there were all sorts of things going on, for example:

We spent some time in a park listening to some music from a stage and Deby got to move her hips to the local beat. Everyone was having a fabulous time with lots of singing along, clapping and waving of arms.

We returned to the motorhome parking area which was really not much more than a bit of wasteland but at least it was in a good position. Scruffy liked it more than us.