The enormity of Seville Cathedral 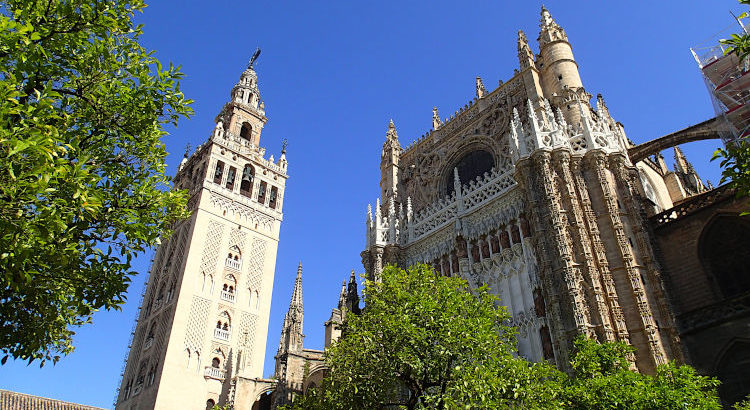 Seville Cathedral is truly incredible, in many ways. It can be best summed up by a quote from the Cathedral Chapter (a college of clerics formed to advise a bishop). They said, “Let us build a church so beautiful and so grand that those who see it finished will take us for mad”.

Seville Cathedral was built to demonstrate the city’s wealth, as it had become a major trading center in the years after the reconquering of Spain and Portugal in 1248. It was in July 1401 that the city leaders decided to build a new cathedral to replace the original grand mosque that served as the cathedral until then. The original minaret from the mosque still remains and is now the cathedral bell tower – it’s gorgeous.

Cathedrals usually hold much of a city’s wealth and may be filled with wondrous sculpture, metalworking, textiles and of course art. If you want to see some of the great paintings by the old masters, many of them are still displayed in their original places in churches and cathedrals today, commissioned and paid for by wealthy patrons.

We really like visiting Cathedrals and Churches when you can do something different from the normal, like climbing a tower or getting out onto the roof. At the Seville Cathedral, we were able to climb the main bell tower, the Giralda Tower, (35 winding ramps up) and get expansive views out over the city. It was also possible to get views into areas where cleaning and conservation of the ancient cathedral were taking place.

The Giralda Tower. It was originally built as the minaret for the Great Mosque of Seville in al-Andalus, Moorish Spain, during the reign of the Almohad dynasty, with a Renaissance-style top subsequently added by the Catholics after the expulsion of the Muslims from the area. It was commissioned in 1171. The tower is 104.1 m (342 ft) in height and remains one of the most important symbols of the city, as it has been since the Middle Ages.

Whilst up there we got to see how really massive the Cathedral was and we got to have a nice close up of the many bells. We think of church bells as being rung by hand using long ropes, but these were all wired up to chains and electronics to play the bells automatically these days. The ropes would have to be long indeed to play these bells!


One does not discover new lands without consenting to lose sight of the shore for a very long time.

Inside the Cathedral, there was just so much to see. The highlight for us was to hear that the remains of Christopher Columbus are entombed there. He died in May 1506, aged probably 54. His remains were first interred at Valladolid where he died.

So Christopher Columbus, that very famous Italian explorer, moved around an awful lot even after his death.

The rest of our 3-hour visit to Seville’s Cathedral involved us visiting the ground floor. This included its 80 side ‘chapels’, all of which seem tall enough to contain an ordinary church. We took SO many photos, that it is impossible to share them here, or the page will never finish loading. If you like you can view a picture slide show below of some of our other photos from inside the Seville Cathedral.

The total area covers 11,520m2 and according to some, new calculations, based on volume it is the largest church in the world. That’s in front of St Peter’s in Rome and the Cathedral in Brasilia, but this is still a subject for debate, and many claim it is still the third-largest in the world. Whatever, it is humongous! It took us more than 3 hours to take the audio tour and look around, so that’s what you call a big church!

Hours and prices for Seville Cathedral

Admission to the Cathedral was €9 each. If you want an audio guide, these are €3 each. We saved a few euros by only having the one guide. Did you know that usually these audio guide machines come with a headphone socket? We always carry a tiny set of earphones with us, so we can share an audioguide. More money to buy chocolate 🙂