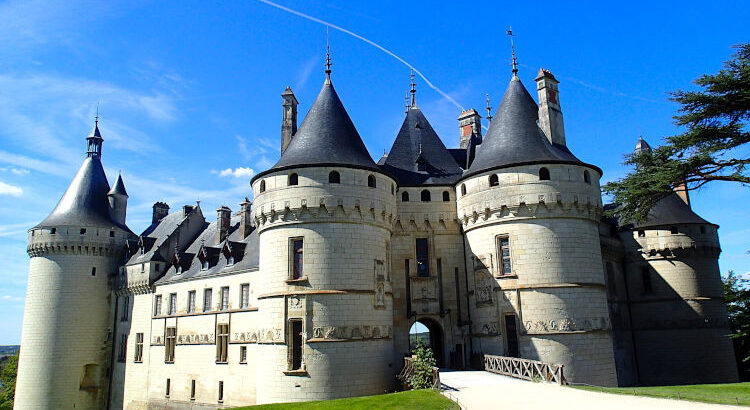 There originally was a castle on this imposing riverside site in the 10th century. However, after the owner Pierre d’Amboise rebelled against Louis XI, the king ordered the castle to be destroyed. Later in the 15th century, Chateau de Chaumont was rebuilt by Charles I d’Amboise.

Interestingly the chateau has only three sides as the side facing the river was removed in the 16th century apparently to improve the view and what an impressive view it is (albeit we weren’t able to get any photos from the open side). So now this castle is a U shape with a large open courtyard and garden facing the river.

After seeing Chenonceau Chateau yesterday, it was interesting to see where Diane de Poitier had been sent to by Catherine de Medici. It hardly seemed like a terrible punishment for a mistress to be sent to such a grand castle of her own, although she didn’t stay long.

With the possibility of complete Chateau overload when you come to the Loire, Chaumont has tried very hard and very well to make it a different chateau tour to all the other dozens of chateau tours you can go on in the Loire Valley. They did two main things to make it stand out from the crowd:

The gardens and notably the International Garden Festival were the highlight of the day as far as we were concerned. They looked fabulous but would have been even better a century ago.

“I want it, I want it…” exclaimed Marie Charlotte Constance Say, the granddaughter of sugar magnate Louis Say, when, while strolling along the banks of the Loire, she first set eyes on Chateau de Chaumont sur Loire. She was orphaned when she was aged 14 and then she was just 17 years old on the 17th March 1875 she bought the chateau and the adjoining 1,025 hectares of land. That must have been quite some fortune she inherited!

Three months later on the 7th June 1875, Mademoiselle Say married Prince Henri Amedee de Broglie. With her parents deceased she “brought her husband” twelve million gold francs as well as Château de Chaumont and a townhouse at 10, Rue de Solferino, Paris. Apart from the Rothschilds, there was no wealthier heiress in France. Wow!

Being quite wealthy they did much to restore the chateau to its former splendour as well as remodelling the park, creating gardens in an ‘English’ style. She moved nearby village houses and the church when they interfered with her garden plans. And over time they purchased more of the surrounding lands going from the existing 1,025 hectares all the way up to over 2,500 hectares of land.

Marie was a great spender of money and loved to hold parties and fetes. Everyone from maharajahs, actresses, European royalty, the greatest artists and scholars were all invited. She would even ship in the entire Comedie Francaise down from Paris.

Personally she would always rise at 2 pm sharp, and be late for dinner at 8 pm. The kitchen staff prepared four different meals so that one would be ready whenever she was, with menus of some 11 courses and desserts!. Blimey, she knew how to spend and waste money years ago.

Following a number of financial setbacks starting in 1905 and ending in the 1930s she decided to sell off most of the 2,500 hectares of land, leaving only a mere 21 hectares. She sold off her multiple properties across the world and parted with hundreds of works of art, including most of the ones in her beloved chateau. Eventually, on the 12th October 1937, she was served with a compulsory purchase order, from the French state as being in the public interest. The Princess received compensation of 1.8 million gold francs. The official handing over of the keys to the State took place on the 1st August 1938.

There’s more fascinating stuff about the affluent couple on the link below:
http://www.domaine-chaumont.fr/en/chateau/chaumont-and-its-owners/chateau-s-last-private-owner

The International Garden Festival started in 1992 and goes on from April to October each year, with more spaces opened up every year for the permanent displays.

Each year the festival has a theme and it is not just gardeners and landscape architects who are invited to show but also writers, artists and architects.

It’s full of lots of ideas and experimentation, some of which seemed to work well, while others didn’t.

Over the 6 months each year, it must be amazing to see how the gardens developed over time.

There were lots of interesting plants and designs and even plastic grass. I guess that meant nobody needed to cut the grass.

And as far as greenhouses were concerned we ‘d never seen one like it. It had a normal frame but the glass was replaced with old cinefilm. Very arty!

There was also a whole farm complex that the prince had built along with some incredible stables that he had the new-fangled electricity lights added before the chateau. He obviously loved his horses as well as his wife.

And then it was time for us to go and visit the chateau. We didn’t take a whole lot of photos inside. It was nothing like the sumptuous chateau at Chenonceau because a lot of the furniture and valuable artworks were sold off in the 1930s. We did, however, find some more modern art.

What the hell had G.Steiner and J.Lenzlinger done to the small chapel with its whimsical art installation? What a nightmare. Not to our taste at all – urgh.

And then this is what we found in the large attic space. It looks like a lot of old crap, covered in layers of dust and cobwebs, all just dumped out the way.

However, why would they have a light laying on its side with the wire plugged in and the bulb switched on? Deby said it was a display. Art? It was only when you looked carefully did we appreciate that it was very carefully laid out rather than just a peek into some old crap thrown into a disused room.

We did find these beautiful floor tiles, and then there were the customary nice big chateau fireplaces in most of the rooms.

Nige had a horrible cold and was struggling by the end of the day but we managed to see most things we wanted to. We didn’t have the energy to walk around the whole estate so we did miss out on some garden sculptures which were recommended.

Entry was €18 each plus an additional €4 each for the audio guide, which we skipped this time and just used the brochure, which was adequate info about the castle, the rooms, the history and the inhabitants. We’ve spent a lot of money visiting all these Loire Valley chateaus!!

We parked at the dedicated motorhome parking right at the chateau entrance. They allow you multiple entries with your ticket on the day so we could come back to the van for lunch and check on Scruffy before going back for more in the afternoon. It was expensive, but there was a lot to see and we really enjoyed the day.