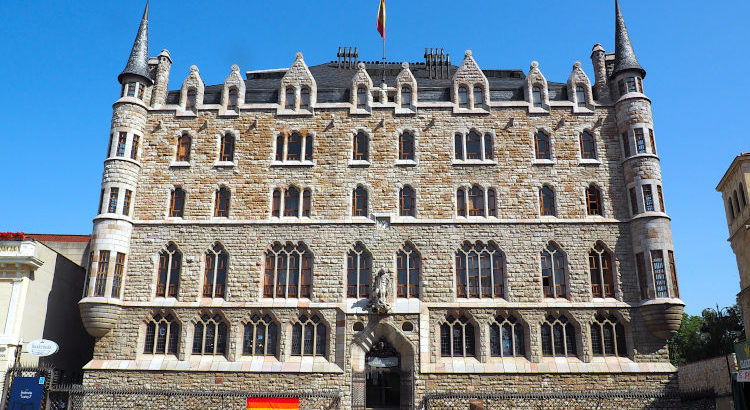 We’ve been fascinated with any building that Antoni Gaudi has been involved with since we went to Barcelona back in 2002. There is surely no similar architect in history to combine function, form and beauty in quite the same way.

There was a building in Leon which Gaudi designed which was a little bit different to his normal project, but no less stunning and impressive. Those fairytale towers and turrets make my heart skip a beat!

The Casa Botines (built 1891-1892) was a warehouse on the ground floor and basement, while the owners Simón Fernández and Mariano Andrés had the first floor as a home and all the other floors were rented out to wealthy people.

With the Casa Botines, Gaudi wanted to pay tribute to Leon’s emblematic buildings. Therefore, he designed a building with a medieval air and numerous neo-Gothic characteristics. Gaudi chose an inclined roof and placed towers in the corners to reinforce the project’s neo-Gothic feel. To ventilate and illuminate the basement, he created a moat around two of the facades.

In 1929 the savings bank of Leon bought the building and much of the interior was sadly altered to provide the offices and cashiers spaces needed, so now the ground floor feels rather empty and much of the original character from the warehouse floor and cutting room is lost.

Today Casa Botines is a small Gaudi museum and even though it was interesting the inside didn’t feel very authentic. It was perhaps too over-restored with modern materials and glasswork, rather than being true to the original.

It was ridiculously expensive for what it was at €8 per person. It is better to just enjoy the architecture from the outside unless you want to learn more about Gaudi and his various architectural projects around Spain, most of which you could probably learn from the Internet.

Leon cathedral is so massive that we couldn’t get a photo of the whole thing from the front.

Even with our backs pressed up against the buildings surrounding the square we still could only get part of the cathedral in the picture.

It’s impressive enough from the outside, but when you step inside and see those stained glass windows, well, expect to feel a rush of emotion.
The cathedral is ALL about the windows. There are nearly 1,800 square metres of stained glass to look at. That’s a lot of stained glass.

The great majority of them date from the thirteenth to the fifteenth century, which is a rarity among medieval gothic churches.

The Cathedral is also called The House Of Light which is down to those stained glassed windows. They are truly the most splendid we have seen on our travels so far.

However, the coloured glass actually makes the Cathedral one of the darkest we have ever been into. If the windows would have had clear glass in them there would have been a lot more light in the Cathedral. So that House Of Light name is a not totally accurate description!

Almost all of the Cathedral was built between 1205 and 1301. The North tower and cloister were built in the 14th-century and the south tower completed in 1472.

There are also some very nice choir stalls carved by Flemish artists in the 16th Century.

Each one is different with deeply carved detailing.

We then wondered around the Cloisters of the Cathedral, where the ceilings of the portico were sensational. Such amazing carving.

And we also got a real close up view of a couple of the ornately carved stone turrets that would normally be on the roof. These had been replaced with more modern replicas while the originals were placed at the centre of the Cloisters for their protection and so we could have a good look at them.

In the Cathedral museum, we spotted a few interesting things, like this very colourful confessional.

And then there was this painting of Jesus on the cross wearing a slip or a petticoat, which was weird. We assume in the original Jesus was naked and then in later years when nudity was deemed as immodest someone came along and painted on a dress! Why not a loincloth?

And finally there was this! Not sure what to say about this. Weird.

The final building we visited in Leon was the Basilica of San Isidoro. You can only visit the Basilica by guided tour and the English tours don’t run very often. We were asked to come back tomorrow as there were no English tours today. It was SO hot in Leon that we almost didn’t bother – we were keen to get out of the city, but we’d read good things, so we stayed around another night and walked into the city again along the river the following morning. We were so very glad we did. The museum and especially the Royal Pantheon are not to be missed. Unfortunately, NO photography at all was allowed inside the basilica so we have used photographs from the official website.

They have never been restored since they were originally painted in the 11th Century. They are all totally authentic and in original condition, although they have been cleaned twice in history. There is some slight damage where a door was moved when the church was extended, and some fading on the wall exposed to the sunlight, but otherwise, they are in striking condition.

They are very colourful and skillfully done.

The fresco technique of painting and scratching into the still wet plaster has allowed them to remain so well preserved today.

In Chalice’s Tower, there was a gold chalice. This one item dominated the whole room. It was the only thing in there besides some benches to sit on.

The body of the Chalice is formed by 2 cups of eastern Roman onyx or agate. One for the drinking vessel and one for the base, both dating to the first century. These Roman pieces were decorated by Doña Urraca (The daughter of King Fernando I) with her finest jewels and precious stones and she gave them the shape of a Chalice. The decoration is made of gold, silver gilt, precious stones like amethysts and emeralds, seed pearls and a human face made of glass paste which has been considered a Roman cameo. The nail knot has green cabochons pearls, sapphires and emeralds. All this is by crimping with golden filigree and topped by leaves and stems.

The Basilica is named after Saint Isidoro. He lived in the 7th Century and as Bishop of Seville was instrumental in eliminating the Arian heresy in the Visigoth region. He ordered seminaries built and founded schools throughout his diocese and wrote many books, including a history of the world.  He was proclaimed a Saint in 1598, and his feast day is the 4th of April. Interestingly, probably because of his encyclopedic knowledge, he was declared the patron saint of the internet, computers and computer users by Pope John Paull II in 1997.

Leon was an important town for the Romans although little remains that we could find. However, one side wall of the Basilica of Saint Isidoro was built up against the last remaining part of the Roman wall of Leon. There was not much left but it was good to see. All the Roman walled towns in Spain seemed to have the same setup of walls. Very tall with lots of towers.

We parked our motorhome in an official Aire in Leon. On the map above we parked where the black arrow is pointing. Sat nav coordinates = 42.604550, -5.585049. There was some shade from a few trees but it was essentially one side of a large carpark. When we visited Leon there was a heat wave so it was very hot, particularly the first night. There was free water and waste facilities and parking was allowed for motorhomes for 48 hours providing you parked in the marked bays. It was about a 25-minute walk to all of the sightseeing spots. The river part of the walk was quite nice.