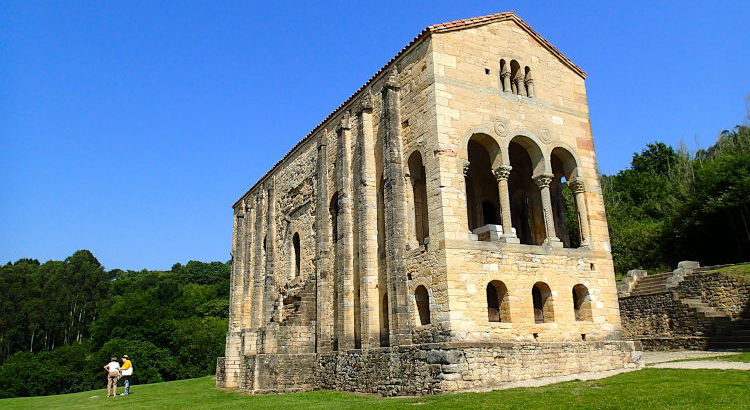 You’ve heard of Romanesque when it comes to architecture, but have you ever heard the term Pre-Romanesque? It’s really for architecture that was before its time before the Romanesque style became popular, churches and monuments were being built in this style in and around the Asturias area of Spain.

King Ramiro I, of Asturias ordered more than 15 churches, monuments, palaces and buildings to be built in the 9th Century and the first few years of the 10th Century. It really is incredible to see buildings that were first built in 842. That is really old!

The two churches at Naranca, on the outskirts of Oviedo, are particularly beautiful and important examples of Pre-Romanesque architecture.

The Church of St.Mary on Naranca hill was originally built as a palace and had an upper and lower floor and a basement cistern where water was collected.

In the 12th Century, it became reused as a church.

It has two balconies for commanding views over the surrounding countryside.

Also on the same site is a second building that was originally the royal church that served the palace and king. The St.Michael of Lillo church used to be a much larger building than the palace but today only a third or so of it remains.

The end 2/3rds collapsed due to unstable ground and were never rebuilt.

The shortened church was simply neatened off at the end resulting in the rather strange shape it has today.

Sadly inside was closed for restoration of the important frescoes so we were only able to visit the outside – free of charge.

They are a big tourist attraction today. You can visit the outside free of charge, or take the guided visit which also includes inside and the balconies, although it is only in Spanish, which meant Nigel understood nothing of what was said and Deby picked up probably 10-20%. The cost was €3 each.

We were able to park very close by in the car park at the bottom of the hill. There was some nice shade, a tarmac surface and coach parking spots that were perfect for motorhomes. Then it’s just a short walk up through the countryside to the two churches at the top of the hill.

They are very picturesque and we totally went overboard with the cameras, enjoying the lovely blue sky after all the grey cloudy weather we’ve been having recently.