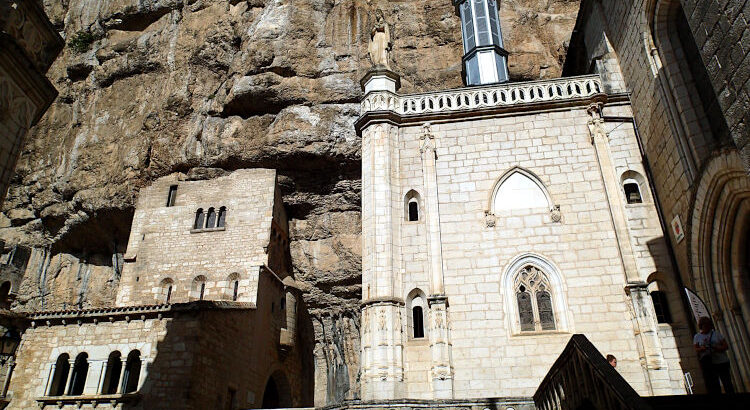 Rocamadour is known for the Cité Réligieuse complex of religious buildings, accessed via the Grand Escalier staircase. We did the tour of Rocamadour a little differently to how most people do it. They entered the village at the upper level by walking along the road from where we parked the motorhome and then climbed down lots of paths through the woods, and steps to the next two levels.

We were staying at a motorhome site (a field with some nice trees) on the top level a little walk away from Rocamadour. It was free when we visited, although there were barriers and payment machines recently installed, but not yet operating. We walked along a cliff path and then a road to get there which was how we got these great photos of the village from above.

Rocamadour is an important pilgrimage destination and has been for 1000 years. Built on the site of a shrine to a Madonna, the shrine became famous for its healing powers, and soon became a stop on the St James Way pilgrimage path to Santiago de Compostela.

We skipped the top level where the castle was and started down the steps. This was very lovely as the whole area was beneath a beautiful canopy of trees. We got to see various caves and shrines on the way through the woods, and then we were down to the second (middle) level. This was where most of the religious buildings were. And wow, they were very impressive. We simply adore this style of architecture.

We arrived at a square that is surrounded by 8 important churches and chapels. A small chapel was built in the cliffside in 1105 and in 1112 the abbot of Tulle came to live here and in 1148 a first miracle was announced and pilgrims started arriving.

Money from the pilgrims financed the building of a large basilica, the basilica Saint-Saveur and then further religious buildings were built also in this relatively small space.

The religious buildings here include:

The statue of the Black Madonna was the main draw for the pilgrims. Carved from the wood of a walnut tree in the 12th Century, the Black Madonna has forever since drawn worshippers from all over Europe in search of miracles. Some of the pilgrims were super famous, like Henri II of England, Eleanor of Aquitaine, Louis IX of France, Charles IV of France and Louis XI of France.

Sadly the bell has not rung on its own now for a very long time. The ringing bell kept the pilgrims coming and kept the money coming in. Today the visitors keep coming even if the bell doesn’t ring.

As an act of penance in previous times, pilgrims would climb the 216 steps on their knees. There are now two lifts available from the village up to the castle at the top for 21st-century lazy fatties.

The lower level where the village is has just one street from one end of the village to the other, called the Rue de la Couronnerie.

This very lively street serves pretty much the same purpose it did when it was established, with shops and restaurants for the thousands of tourists who come every day. It has some very beautiful shops selling handcrafted goods and if we had a home, we would certainly have overspent in this village. Many of the shops were just our style.

Rocamadour was another great French village to visit. It’s a UNESCO World Heritage Site and it was voted as the favourite village of the French in 2016.

After may hours of visiting Rocamadour we eventually returned to our motorhome up on the top of the gorge.

The field we stayed in, with no motorhome facilities, was great and can be seen in the picture above where the red arrow is pointing. It was free but at the time we were there they were installing fences and gates to introduce a charge for parking there. The coordinates were 44.802336, 1.631391.