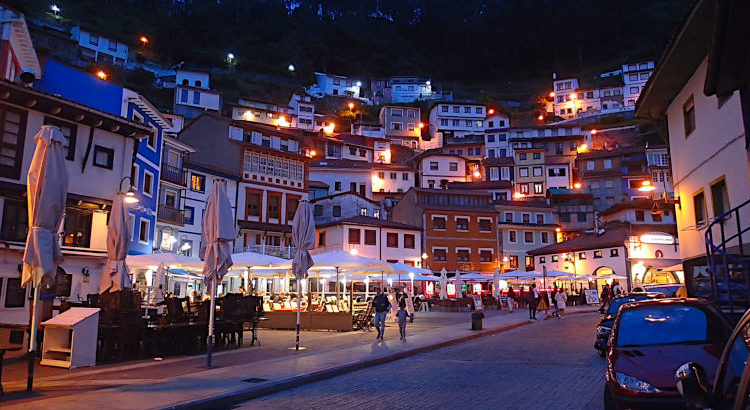 We’ve been away for over 4 months now and really hadn’t seen any rain but we were expecting quite a lot over the next week. In Cudillero because of the weather, we arrived quite late in the day, parked at the port on the outskirts of the village and just had time to walk into the village for a quick look around.

It was rather gloomy and we were not able to get the nice sunny and brightly colourful pictures that the charming fishing village is usually known for.

There were lots of nice walking routes around the village, which were set out on a big map in the village. Be warned though, the walks involve a lot of steps up and down and in the heat, it can be quite difficult if you don’t have good knees or hips (yeah, that’s us then).

The various walking routes were all mapped out and marked with different coloured symbols painted on the streets, and there were plenty of miradors where you could stop to admire the views.

However, we went back to the van for a quick dinner and watch a bit of TV until the sun went down. That’s when the gloomy sky didn’t matter. The water and sky turn a deep blue, the lights come on in the village and then it feels magical again.

Because it was almost the longest day we had to wait until really late to be able to get some night time photos. Despite the late hour, the cafes and restaurants in the town square were packed. The Spanish people seem to eat really late, really late!

Seeing we couldn’t get nice bright daytime ones we thought night time photos might look nice instead.

Sadly the village doesn’t seem to be doing so well these days. There were lots of shops which were closed down and many houses and other places were empty and for sale. Hopefully, tourism can improve the village’s fortunes in future along with their still busy fishing industry.

As mentioned we parked at the port on the outskirts of the village where the parking was free. It didn’t have any facilities but it was quiet enough at night.