The French part of Lake Geneva 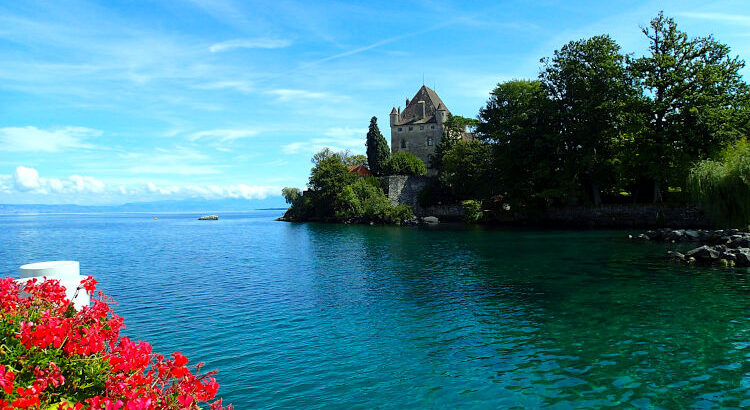 On the French side, which is 40% of the lakes surface area, Lake Geneva is known as Lac Leman. This is the shortened modern version of the first recorded name of the lake being Lacus Lemannus, dating from Roman times.

On our trip, we have always been attracted to water, mainly the sea. Here we had forgotten that even though we were next to water we were partly in the mountains. We felt really cold and thought a cold spell had arrived now that we were getting into autumn. However, we had forgotten that instead of being beside the sea which is obviously AT sea level we were actually at 1,220 feet above sea level (372 metres). Those few feet made a bit of a difference but it was also by now September (2019) and things weren’t as hot as they had been.

So we treated ourselves to a campsite with some nice electricity so we could run the heating. We ran it all night! Camping La Pinede was an ACSI site and charged €18 plus taxes per night with our ACSI card. It had an indoor heated swimming pool and jacuzzi which we took advantage of. What a lovely treat; we haven’t swum much on our trip. We checked back and it seems as if it was the middle of May since we’ve been on an actual campsite, rather than an Aire or wild camping.

But the second day was nicer, still cold and the air was cold, but the sun came out nicely in the afternoon. We went out on our moped and visited the pretty medieval walled town of Yvoire, right there on the edge of the lake.

It had a very striking and picturesque castle on the edge of the lake. And there were some restaurants with seating on the water’s edge with amazing views and astronomical prices. Sadly we passed and looked on enviously.

It’s a beautifully preserved old town with lots of quaint cafes and restaurants. There are flowers everywhere and clearly people here take great pride in their village.

It also had many craft and art shops with handicrafts and art on sale, as well as a few regular souvenir shops. A really lovely place to spend some time browsing around and admiring all the wonderful bits and pieces we could buy if only we had a home to put them in.

The town was fortified by Amadeus V in the 14th century, and the wall still runs around the town today, even on the lake side to stop invasion across the water.

It soon gained a strategic military importance and the inhabitants were given tax privileges. Every fortified town needed a few ways in and out but today the medieval gates are open to welcome the visitors and their visa cards.

The lake was so clear it was amazing. Just like the water was out of the tap. Relative to other lakes in the world it must be so unpolluted, despite all of the activities on and around the lake. There were lots of swans and ducks which seemed weird because the lake is so big, it’s like finding swans on the sea! There’s that sea again.

Our drive along the road overlooking the lake was super pretty. There were towns and villages, with lots of flowers, great views and some stunning properties to ogle at.

Our next stop was back along the coast of the lake in the other direction at Thonon Les Bains. Coming into town it was a much bigger place than we had expected with a lot of out of town shopping. But the town centre itself was quite charming. We walked along the edge of the lake through gardens, and alongside the marina with lots of small boats, then took the short funicular railway up to the upper town. It was €1.10 per person each way. Whenever there’s a funicular in town we always like to go for a ride!

We walked around the town, which was pedestrianised and had a very nice shopping centre but it was Monday so almost everything was closed (what is that about France?) We walked back down to the lakefront and decided not to have the expensive ice creams seeing we had already splashed out on a campsite. We saved the money and the calories!