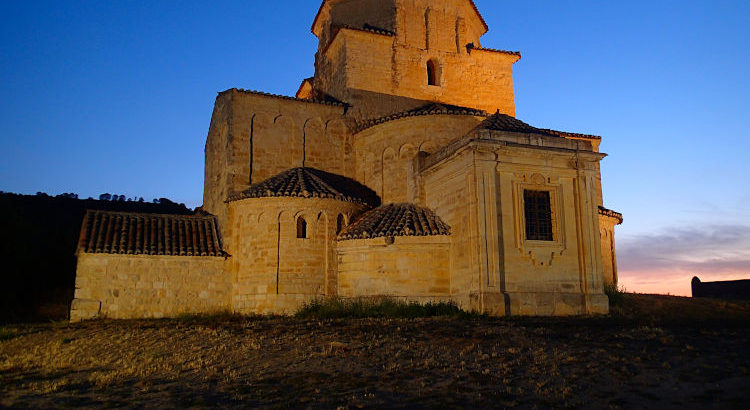 When travelling from Astorga to Avila we wanted to find a nice place to break up the journey. Deby found us a gem of a place. Usually, we look at all the places together and decide where to stay, but this time Deb looked on her own and picked this place, keeping it a secret until we actually turned up and found it. It was really quite fun driving on a mystery tour and not knowing where we were driving until we drove up this narrow track and there it was. Wild camping perfection.

What a fantastic place it was to stay. Surrounded by rolling hills, huge views, nature, corn fields, rabbits and total peace and quiet. The hermitage is quite isolated, and has a small grassy parking area with a picnic table. We were the only camper there and it felt like our secret place, very off the beaten track.

We arrived in the afternoon and stayed until the next morning next to the Hermitage. It’s the Hermitage of Our Lady of the Annunciation. Although today’s meaning is usually a place where a hermit lives in seclusion from the world, Hermitage was more commonly used to mean a building or settlement where a person or a group of people lived religiously, in seclusion.

A shrine was built in the 12th Century and it was renovated in the 17th and 18th centuries with a small Romanesque style chapel. The image of the virgin is dressed and is celebrated every year on the 25th of March with a parade through the village streets. Otherwise, the chapel seems to be rarely used and was locked so we could only peer inside through the keyhole.

It was great for us to sit about in the countryside relaxing and eating and writing up our blog etc.

And having a little wine. It would be rude not to.

One lovely thing happened while we were there. A couple came with two children, probably about 12 and 14, a boy and a girl. They were trying to take photos of the family by balancing the camera on the bonnet of the car but it wasn’t quite working out. Deby went over to offer her photography services and they got chatting. Turns out the couple had been married in the hermitage 18 years ago, then had left the area and had never returned. Now they were visiting with their children and wanted to get a family photo with the church in the background where they were married. It was so sweet and such a pleasure to help them with lots of lovely family photos.

Then in the morning, we drove off the short distance to the next hill to visit the walled town of Uruena. What an imposing town it is with the intact walls. The whole countryside and feel of this area is quite reminiscent of Tuscany in a way. But it was really dry when we visited.

Uruena was encircled by a pretty tall wall and had a castle in one corner. Most, not all of the 12th and 13th Century walls have been beautifully restored.

Uruena was part of the manor of Valladolid that King Alfonso VII had given to his sister Sancha. Its strategic location in Tierra de Campos, on the very border of the kingdoms of Castile and Leon, made it the battleground of numerous wars between the two kingdoms. Leon kept the upper hand until 1281 when the fortress was reconquered by the Castilian troops.

When we visited it was a Monday and in Spain, that means pretty much everything is closed. Uruena was no different. Nothing was open although we were able to walk through the open gate and scramble about all over the walls which is what we love.

Long lengths of the walls are open for you to walk along and there are fantastic views of the surrounding countryside.

We pretty much had the place to ourselves. It was mid-morning and we saw two other visitors. We saw a handful of other people which is not surprising because in the 2018 population census only 188 people lived in Uruena. It’s the sort of village where the houses all front straight onto the street and the gardens are at the back so it gives the impression the place is deserted unless you can get up higher and get a broader view.

In 2007 as a novel way of bringing more visitors to their remote and quiett village, the locals decided to do something different. Uruena decided to become a “Villa del Libro” (Book Village). The village now has 12 bookshops. That’s a lot of bookshops for a village with only 188 residents. Some are general interest bookshops, while others specialize in old and rare books. Others focus on the region of Castilla y Leon, children’s books, bullfighting and wine.

Uruena is also home to an institute of ancient calligraphy that offers classes on the old writing techniques found in medieval handwritten tomes. Similarly, the Artisan Book Binding Workshop of Uruena holds seminars on how to physically create and unite the spines, covers, and pages that makeup books. We would have loved to have had a go at ancient calligraphy but everything was closed.

And on special dates such as the World Book Day (23 April) or on the village’s anniversary in March, this place becomes a real celebration with conferences, round tables, storytelling, origami workshops, extraordinary concerts, dinners… It is a fun way to enjoy reading, a great opportunity to find a copy of that book you have always looked for, or for having a good day out.

It was fabulous to see a village making a real effort to “stay alive and thrive”.