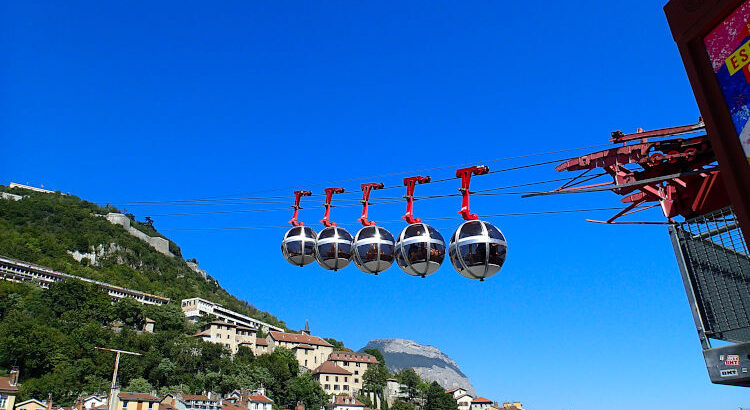 A long time before our trip, Deby googled places to visit in France, for example, the prettiest villages, walled towns, towns with Roman history, best museums, and so on. Somewhere in her searching, Grenoble found its way onto one of our must-see lists and so we arrived, without knowing anything more than that – it’s on “the list”.

Its been a bit of a pattern lately that we’ve been just arriving in a place, or looking at it late the evening before to see what there is to visit. It’s not like us to be so carefree, we usually like to carefully research and plan to make sure we get the best out of a place, or do a certain route and not miss any of the must-see sites along the way. I think a happy medium would be good at the moment so we aren’t always arriving in a place and saying, right, what is there to see here then?

Grenoble is apparently one of the best cities for impressive museums it turns out, but with the sun shining, the sky a gorgeous shade of blue, and the mountains creating a stunning vista, we weren’t interested in any museums today.

For us, the joy of visiting Grenoble was the scenery. The drive-in (and out) of Grenoble along the route through the mountains was spectacular. Not too hilly or bendy though, as the road weaved its way through the valleys rather than up and over the hills. All around spectacular views, crystal clear rivers, tree-covered mountains and barely a cloud in the sky – bliss. It’s setting really is to die for.

In Grenoble itself, we wandered about for a while, visited the cathedral which was nothing very interesting, wandered through the large pedestrianized area in the old centre and window shopped for a while and then stopped for lunch. Turns out Grenoble might just be the best place in France to have lunch, or dinner for that matter.

And what a lunch it was! Our first time eating Fondue and we were hooked! Why has no one told us about this before? Fondue. And wine. Best meal ever. Bread, cheese, wine = all the food groups you need. Bloody delicious. Grenoble is apparently famous for its fondue and if you love cheese, you’ve come to the right place.

The feast of bread, cheese, wine, salad and ham was followed by coffee and then the lady brought us a complimentary Chartreuse. Deby isn’t a drinker so two drinks at lunchtime, even with all that food, got her quite tipsy. She then giggled and chatted inanely for an hour and as normal when that happens we had to wander around again for her to walk it off. The restaurant (bar) had a lovely vintage alpine/ski atmosphere and the fondue was delicious.

We then went on a trip on the most unusual cable car – The “bubble car”. It’s quite the striking site making its way across the river and up to the fort on the hill opposite the city.

The line was inaugurated on the 29th September 1934 with wooden cabins/cars. In 1951 the second generation of rectangular cabins/cars made of metal was introduced.

In 1976 the famous plexiglass and aluminium bubbles took over. The bubbles:

It took us up to the top of the hill, on the other side of the river, overlooking the whole of Grenoble. It cost us €8.50 per person return. At the top of the hill is – The Bastille. Again, we hadn’t done any research so we arrived up at the top expecting there to be something to visit, only to find there really isn’t very much up there. A couple of nice viewpoints where you can get full 360-degree views over the city of Grenoble and the mountains beyond. There’s a restaurant (but we’d already stuffed ourselves with fondue) and a very boring small museum about Mountain troops for some reason which we didn’t visit.

So after admiring the view, we caught the cable car back down again. It was hot in there with the sun shining on the little bubbles and not much in the way of ventilation. It’s not like we could keep the doors open as we travelled.

That afternoon we had some time left so we also visited the Caves Of Sassenage which was close to where we had parked the motorhome. We drove on our moped to the caves car park but it was a really long hike from the car park to get up to the caves which were high up on a hill. Pretty though, walking up through the woodlands and next to the river as it bounced and wended its way over the large boulders and small waterfalls.

The guided tour of the caves was in French but we were given a two page set of well-written notes in English so we could follow along with the commentary. There was a small group of just five of us with the guide and the further we got into the cave, the happier we were that it was a small group! Much of it was very tight!

When the caves were first opened to visits in 1947, there were just 200 meters of paths, whereas today you can walk for more than 1 kilometre. It was all explored and opened up by volunteers and avid cave enthusiasts in the area.

Yeah, see that above? Much of the cave was like this. Very narrow to squeeze through and walking on an open grating with a long, dark drop beneath you. It was a bit unnerving if you have claustrophobia or a fear of heights, or both.

The cave was created 1½ million years ago with water movement through the Senonien limestone mountains, which were formed 80 million years ago. However, they weren’t the sort of caves that supported the usual display of stalagmites and stalactites.

We passed through various areas within the caves with fantastic names like:

Parts of the tour are in an active network which means that when the snow melts or it rains a lot, some of the areas can be completely filled with water. The rocks can be constantly shifting about or areas that used to be open become blocked.

“The Path of Hell” is called that because it is very dangerous to stay inside when the water is coming up. The water can go up by about 15 centimetres (6 inches) a minute so that in less than half an hour the gallery can be completely flooded.

The temperature in this cave is constant in summer as it is in winter, it’s 12C (54F). Rather chilly compared to the outside but we came with coats so it was OK.

In some parts, you definitely had to mind your head and bend over almost double or scramble through. There were a few warning signs and the guide shouted out now and again but one girl absolutely thudded her head against a big rock and almost knocked herself out. We all had to stop for a while to make sure she was OK. We didn’t fancy having to carry her out through the narrow passages.

The caves were really different, not as interesting or impressive as others we had already visited in terms of their formations, but the adventure was climbing about through the very narrow or very low tunnels and across the chasms with the metal gratings. It definitely felt a lot more dangerous than usual cave visits!

In the “Gallery of Flints” we got to see tonnes of flint poking out of the rocks, which is apparently very rare. There are 2 kinds – the bright browns, which are covered with iron oxide and the dark ones covered in manganese oxide.

There was a sound and light show at the end in the largest cavern but it was a bit forced really as there isn’t anything to see there except rocks and flints, but when all the lights went out it was completely dark and very disorientating.

During the tour, we walked over one kilometre into the hills and went up and then down 714 steps and also rose as high as 70 metres (230 feet) above the level we started. It was a fun and very different cave tour. A real feeling of exploring and adventure.

So that was really it for Grenoble. It seemed like a nice city, and if you are interested in museums and cultural events it seems to have a lot going on there. Normally we like certain museums but not today for whatever reason. It has a nice big shopping centre, packed with interesting looking cafes and restaurants, and of course, there is the fondue.

Come for the setting, stay for the fondue, but not too long or you will be too fat to get into the caves.

We stayed at the official town aire but it was a long way out of town in a place called Sassenage. You definitely couldn’t walk to the city centre from there. It was 25 minutes on our moped.

It was free of charge but quite crowded when we visited. The water facilities were all free but there was no electricity. To put fresh water in the van you need a male push-in adapter, the first one we’ve seen like that since we’ve been on our trip. Luckily we bought a set of adapters before we came away and by linking several together we were able to make it work.