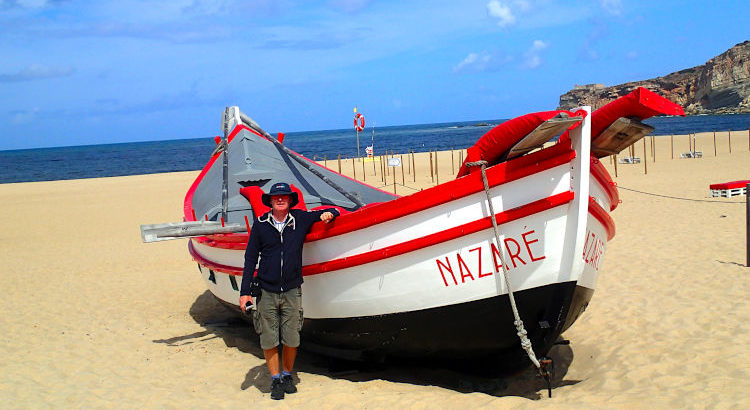 Some of the biggest waves in the world regularly turn up at Praia do Norte, Nazare, Portugal. We recently visited in early June 2019 when we spotted a wave that was only about 6 feet tall. A nice time to visit, but not if you are looking for the monster waves to surf.

You can walk down to an old fort (admission €1 each) on the headland where the monster waves turn up, and you may have seen photos or footage of the spray from the waves drenching the people stood there at the fort, during the surfing championships. We felt like it was pretty windy up on the headland that day where the lighthouse is but the waves were pretty tiny. There was a surf school teaching in the sheltered bay but the waves looked pretty difficult to surf for any real distance that day.

The views down on the main beach where the big waves break was pretty spectacular from up on the fort. Lots of actual surf, but no surfing. Not the right sort of waves.

The primitive fort was built in 1577 to defend the fishing, shipbuilding and wood trading activities. In 1903 a lighthouse was installed and the fort still functions as a lighthouse today.

There is also a museum, which is devoted in part to surfing legends. There are loads of personally signed surfboards up on the wall with details of some of the famous “Big Wave” surfers shown under each board.

Due to the height of the waves, numerous surfing records have been set at Nazare. In November 2011, surfer Garrett McNamara, who resided in Hawaii at that time, surfed a then record-breaking giant wave: 23.8 m (78 ft) from trough to crest. On November 8, 2017, Brazilian surfer Rodrigo Koxa broke the previous record by surfing a big wave of 24.4 m (80 ft). He won the Quiksilver XXL Biggest Wave prize and entered the Guinness World Record for the biggest wave ever surfed.

Social media wrongly attributed footage of German surfer Sebastian Steudtner surfing another big wave also in Nazaré to Koxa. Both have made public statements in attempts to correct the original misinformation. In the meantime, Portuguese surfer Hugo Vau surfed a claimed 35 m (115 ft) high wave, known as “the big mama”, on 19 January 2018. This achievement is yet to be officially validated.

The fort contains a very interesting section showing the deep underwater trench in the area that funnels the water into the headland thus creating the huge waves.

Here are two YouTube videos showing some big waves for you to enjoy. Oh yeah, that’s both spectacular and bloody scary!

Like free divers these surfers do a lot of training to hold their breath. In the museum there is an example of the type of wetsuit they wear which has both additional foam flotation pockets to help them rise to the surface, and also reinforcing panels to protect them from the impact of the wave crashing down on top of them.

As you walk back up the hill to the old town you pass a tall statue god to surfing! Is that what it is?

And from right up on top the headland the views are pretty spectacular. And if you were wondering how we got up there…

We went on a funicular railway. One of Deby’s most favorite forms of transport. She’s pinned several of them all over Europe just for us to make a detour and ride the funiculars. This one we rather lazily went down as well as up, when we could have just walked down. A return trip is €2.90 per person.

When we did our last big trip to Europe in a motorhome in 2002 we went on quite a few funiculars in Switzerland and Austria. We used to take the funicular up and then walk down, however, walking down those mountains took hours, but was beautiful and great exercise.

That was it for our visit to Nazare. We just arrived in the morning from Alcobaca for a quick stopover, and then moved onto Conimbriga, via Batalha Monastery. It’s a quaint traditional town, quite unlike the trendy surfing town we were expecting. The beach is gorgeous.