Santiago de Compostela and all those pilgrims 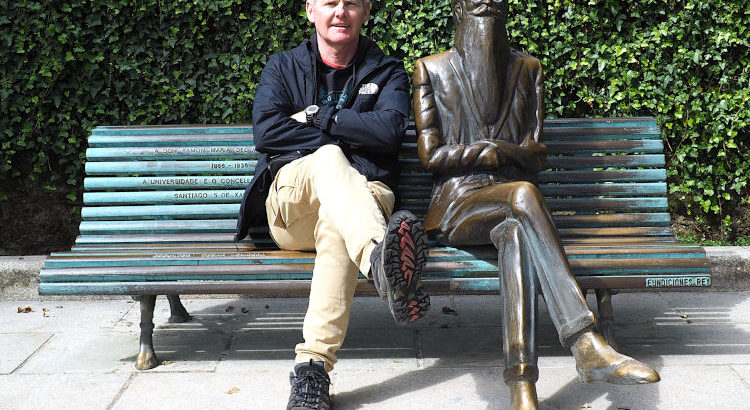 If you aren’t wearing hiking boots, a rucksack and a woolly hat you will most probably feel out of place in Santiago de Compostela. At the end of the famous pilgrims walking route, the Camino de Santiago, it receives thousands of new arrivals to the city every day via the various routes walked by pilgrims in ancient times.

Today the streets ring to the sound of those fancy walking poles hitting the cobbles, rather than the leather soles of pilgrims’ sandles, but the Camino de Santiago could be more popular now than ever, with more than 200,000 walkers completing the journey every year.

Sadly the visit to the cathedral was very disappointing. It was clearly restoration time. There was a lot of restoration going on outside but it didn’t prepare us for what we found inside. Almost everything was covered and being cleaned or restored. There really was almost nothing to see inside except one small stained glass window that wasn’t covered and a few glimpses of parts of the golden altar that could be seen through the plastic sheeting and scaffolding. If you had walked 800km on your special pilgrimage to find the cathedral like this, it must have been very disappointing. However, everything needs a good clean and a little bit of tender loving care now and again. The only problem is when it’s a cathedral it takes a long time and presumably a lot of money.

You could still climb behind the altar and embrace the saint, but you couldn’t take photos doing this. The cathedral is the reputed burial place of Saint James the Great, the apostle of Jesus Christ.

You can also climb below the altar to visit the small crypt which houses the relics of Saint James and two of his disciples – Saint Theodorus and Saint Athanasius. Here there is a very impressive silver sarcophagus.

A very interesting fact about the cathedral is that when the pilgrims used to arrive at the cathedral they would absolutely STINK! After weeks or months on the road, they were very dirty and smelly, and most likely infected with sores or other wounds which were festering and weeping. On arrival at the end of their long journey, they made their way to the cathedral and it must have been difficult to give them a warm welcome.

What a nasty smell! So this cathedral has the most ENORMOUS incense burner which swings from a chain through the main part of the cathedral. It must have burned constantly to cover the stench from the congregation. Thankfully due to Airbnb, most pilgrims arrive washed these days.

After visiting the cathedral we had a short walk around the old town, narrow streets, convents, large and impressive stone buildings with arches and colonnades. There were a lot of shops selling religious souvenirs, many of which were pretty tacky – anyone fancy a St James fridge magnet?

Then we had a quick stroll through the Alameda park, which is a
16th-century park with historical monuments and a garden featuring many ornamental trees & shrubs.

Here we had a great opportunity to take some photos with colourful statues of two old ladies. Who were they?

The sisters were part of a liberal-thinking family and some of their brothers were involved in the anarchist movement in the 1930s before the Spanish Civil War broke out. It is believed the brothers managed to escape and live in hiding during the war and the dictatorship of General Franco; but the family left behind in Santiago, including the sisters, were regularly harassed and questioned by authorities.

In the aftermath of the Civil War and in the grey decades of the Franco dictatorship, the sisters lived in relative poverty, unable to find work due to political pressure. However, their neighbours made sure they were looked after, buying them food and even raising money to find them a new apartment when the roof of their house collapsed after a storm.

Coralia and Maruxa were known by the nickname of ‘As dúas en punto’ (2 o’clock’), as that was the time they chose to go for their daily stroll around the Old Town and Alameda Park. Their particular fashion sense, always wearing eclectic clothes and loud makeup was very unusual in the grey years of the dictatorship and certainly made them stand out from the crowd.

Sometimes they would flirt with male university students heading home for dinner…but they were generally a colourful contrast (a protest!) to the grey, conservative, conformist mood of the age.

Nige got to sit next to Ramon del Valle-Inclan (1866-1936) who was a Spanish dramatist, poet, novelist and was a member of the Spanish generation of 98.

And then it was time to return to the van. We parked in the coach parking for €3.50 for the day until 8 pm. If you want to spend the night it was €12. An easy way to visit the city for the day and then head off into the countryside to spend the night. As usual, check out our map page to see all the free and paid places we’ve stayed on our trip.