Carcassone the fortified city and the legend of Lady Carcas 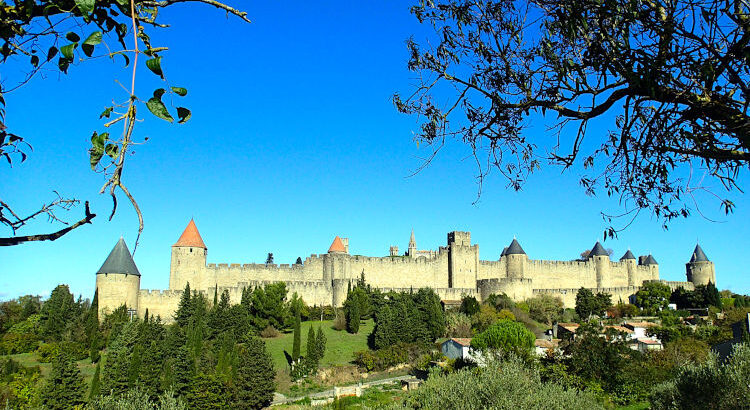 After weeks in the Loire Valley, we travelled hundreds of miles south to warm back up. The day we visited Carcassone was beautifully sunny but it was really cold and it was the first outing for our hats and gloves. It was comfortable enough in the sunshine, but brr, was it chilly in the shade today. There was a cold wind that made our cheeks glow and our teeth chatter.

What an amazing looking fortified city this is with an incredible history and reputation. It almost looked and felt to us a little like something Disney would build (a little too perfect, a little too over-restored) and yet it is a very old structure.

The city has about 2,500 years of history and has been occupied in different ages by Romans, Visigoths, Saracens and Crusaders. The famous walls and buildings of the Old City contain survivals from all these periods.

The walled town of Carcassone is roughly rectangular in shape, up to 525 meters (1,700 feet) long and 250 m (820ft) wide. Carcassone is different from most walled cities as it is famous for having two sets of walls.

The fortified city consists essentially of a concentric design of two outer walls with 53 towers and barbicans to prevent attack by siege engines. Carcassonne was the first fortress to use hoardings in times of siege.

Temporary wooden ramparts would be fitted to the upper walls of the fortress through square holes beneath the rampart itself, providing protection to defenders on the wall and allowing defenders to go out past the wall to drop projectiles on attackers at the wall beneath.

The castle itself possesses its own drawbridge and ditch leading to a central keep. This is the main way into the old city, through the gate, across the drawbridge and under the portcullis, immediately into the steeply rising narrow streets of the old town. And of course straight into the hands of the eager shop keepers.

Carcassonne was demilitarised under Napoleon and the walls and defences fell into such disrepair that the French government decided in 1849 that the walls should be demolished because of the costs of maintenance and repair. This caused such an uproar by the locals, so much so that the decision was reversed and the walls were restored at the end of the 19th century. That’s why the ancient walls and buildings look so ‘new’ and in such good condition today.

In 1997 the Carcassone citadel was added to UNESCO’s list of World Heritage Sites.

Lady Carcas is a legendary character from the city of Carcassonne. According to the legend, she is the wife of Ballak, the Muslim prince of Carcassonne, who was killed in action against Charlemagne. The latter, following the death of her husband, allegedly took charge of the city’s defence against the Frankish army and repelled it. Princess Carcas first used a trick consisting of making fake soldiers, which she had manufactured and placed in each tower of the City. The siege lasted 5 YEARS.

But by the beginning of the sixth year, food and water were becoming increasingly scarce. Lady Carcas wanted to make an inventory of all the reserves left. The villagers brought forward a pig and a bag of wheat. She then had the idea of feeding the pig with the sack of wheat and then pushing it from the highest tower of the City at the foot of the outer ramparts.

Charlemagne and his men, believing that the city was still overflowing with soldiers and food to the point of wasting a wheat-fed pig, raised the siege. Seeing Charlemagne’s army leaving the plain in front of the City, Lady Carcas was filled with joy at the victory of her ploy and decided to ring all the city’s bells. One of Charlemagne’s men then shouted: “Carcas is ringing!”. In French, that translates as “Carcas Sonne” thus creating the name of the city.

The night before, we stayed at Alzonne about 20 minutes outside of Carcassone on a new private camper area that a guy had set up in his very large front garden.
His front garden is shown in the picture above where the yellow arrow is shown at coordinates 43.255183 and 2.182920. The current Google photo doesn’t show his nice facilities, just his front garden. It was easy to pull in off the road and there were electric hookups, water, waste and loo dumping facilities. It cost €10 a night to stay including EHU and then another €3 to fill with water and another €3 to empty the loo. We really felt these should be included in the price if you were staying but we enjoyed our stay. The owner was a lovely friendly Frenchman.

Then we drove into Carcassone and just parked up for a few hours to visit. With it being out of the main season now, there wasn’t any trouble finding somewhere to park, and we stopped in a large layby just off one of the roundabouts recommended on Park4Nite. See the red arrow above, the coordinates were 43.196944 and 2.358019. It was free to stay and right next to one of the still manned Yellow Vest posts so there was someone there to keep an eye on the van. It was about a 20-minute walk from there up to the Cite de Carcassone. As always, you can find all of the places we have stayed and parked the motorhome on our maps page.