Gorge du Tarn – a punt down the river 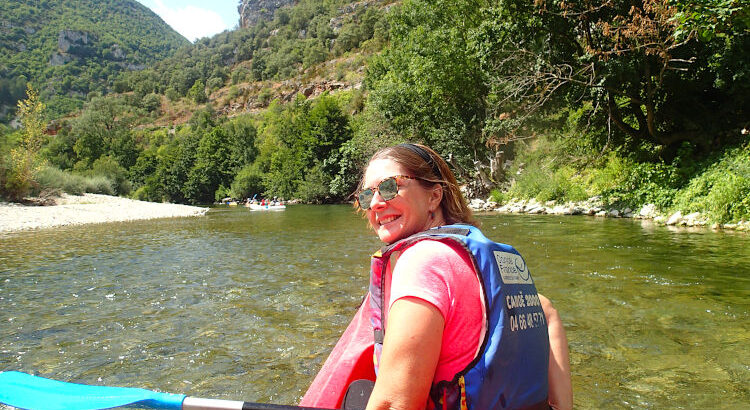 The Gorges du Tarn is a stunningly beautiful canyon that was formed by the River Tarn and is about 33 miles (53kms) long.

We’d read about how beautiful it was but as normal it’s not until you get there that you can really see for yourself. We had no real idea of what we were going to do except drive around on our moped and see what we can see.

We stayed at a motorhome site on the edge of Aquessac village, see the red arrow above at coordinates 44.151801, 3.098928. It was a simple machine and barrier operated aire right next to a campsite, and run by the same people. Ideal for motorhomers who didn’t need all the campsite facilities and could pay less to stay.

The site was nestled under a canopy of trees, on grass, and electricity, freshwater and dumping facilities were inclusive. A perfect example of what a motorhome aire should be.

It was then time for us to jump on our moped and travel along the gorge. It was a great ride on a road that sometimes was right down at river level and other times went right up to the top of the gorge. The road was great and the views were better. We stopped off at a few places along the way to take a break and enjoy the views, and then found a decent-sized village La Malene where we had lunch. After lunch, Deby told me we were going on a kayak down the river.

The kayaking cost us €36 for the shorter of the two trips down the river. So with a double paddle and a life vest each we got into our kayak and pushed off.

Deby sat in the front of the kayak while Nige did all the work at the back. Hey cheeky, that’s not how I remember it. Every time I looked back you were laid out with your feet up and doing nothing while I pulled your heavy ass along the river.

We had a long time to paddle or just drift with the current and meet up with the last coach back up to where we got onto the water. We obviously didn’t start until after lunch whereas we could have started off first thing in the morning and made a whole day of it.

The price is the same. You rent the kayak for the day from the start point to the pick up point and can take as long as you like to get there, stopping off to have a picnic, swim or sunbathe on the shore.

There were plenty of beaches along the way where it looked like people had stopped for lunch, a beer or just to relax.

There were also some places where we had a few rapids where the water was super shallow. One time we actually got stuck it was so shallow.

And then now and again a whole mass of other kayakers turned up, like a huge family and friends outing.

And then now and again the canyon really narrowed and the cliffs were right up next to us, which was really cool.

It was great fun to just drift down the river, with no paddling, because now and again the kayak would turn 180 degrees so we were going backwards.

And then after a few hours, we found the spot where we had to wait for the coach ride back up the gorge to our moped.

Deby’s idea of going kayaking was a fabulous idea. We both had a great deal of fun. We would certainly do it again and take the whole day next time.