We went to Almeria – it was closed 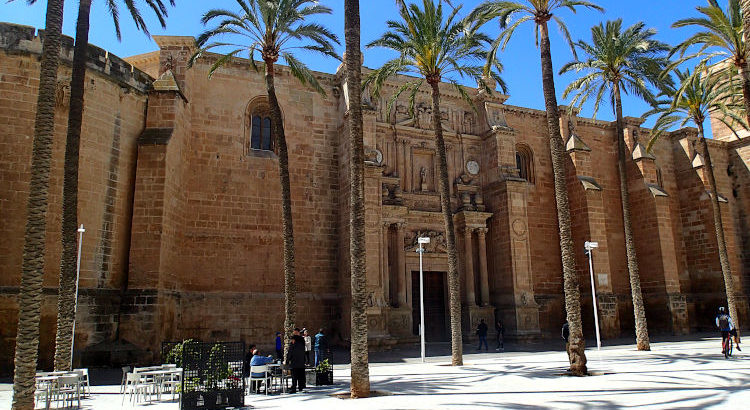 We arrived in Almeria on Sunday, and expecting things to be closed, instead of rushing about we enjoyed a relaxing day by the beach, walking for hours along the promenade, sitting in a coffee shop and just watching the world go by. The weather was sunny although there was a brisk cool breeze on the coast, but it didn’t stop the locals (and us) enjoying the Spring sunshine.

Our ‘campsite’ in Almeria

There aren’t any campsites close by to visit the city without a long trip in, so we free camped in the large car park next to the Auditorium, right on the seafront. It was busy with other motorhomes but very quiet to sleep at night. Easy 2 minute walk to the sea front and also within walking distance to town and the tourist areas.

We took the moped into Almeria center and parked up by the cathedral square. We’d only just got off the bike and I was taking off my helmet when we got a notification on the phone. We don’t get many so I checked it and was concerned to see it was a notification from our Lockdown system to tell us the alarm was going off on the motorhome!

Helmets back on and we made our way back to the van worried about what we might find. We were so relieved to find that it was totally our fault! When we took the scooter off the back of the van, we had left the garage door open. It was pushed to, but not even on the latch or closed. So when the wind blew (and it was windy that day) the door moved in the wind and set off the alarm from the door sensors showing the garage door was open. PHEW! It was a bit alarming (no pun intended) for a while but we felt very glad to have tested the Lockdown system in real life. If we had left the garage door open all day, then someone could have stolen all the stuff from the garage, so we were very happy to have been alerted.

Our visit to Almeria

Well, our day of sightseeing didn’t quite go to plan. After spending the day at the beach on Sunday thinking everything was going to be closed, it turns out that in fact the tourist sites are all open on Sunday and closed on Monday instead. Duh – we should have checked opening times in advance. We learned our lesson there! We went from one site to the next, and found almost everything was closed.

Alcazaba of Almeria, a fortress complex from the 10th century – went to check it out but closed on Monday. Looked good from the outside though!

Civil war shelters – Subterranean system of concrete air-raid shelters used during the Spanish Civil War. Went to check it out but closed on Monday.

Moorish water cisterns – restored stone cisterns from the 11th century. Went to check it out but closed on Monday.

Cerro San Cristobal – old remaining part of the city walls, high observation point over the city and a large statue of Christ. This has got to be one of the nastiest places we’ve visited. The walk up the hill to the walls was like walking up through a rubbish dump. The whole area is used for fly tipping and there is broken glass, syringes, open bags of rotting garbage, construction waste etc, all in big piles on the road sides, with stinking streams of dirty water running down. It was truly horrible.

And when we got to the top, more rubbish, and graffiti everywhere. Not even the statue was spared. Not a nice place to be at all. We snapped off a few pics of the (closed) Alcazaba on the opposite hill and quickly made our way out of there.

Covered food market – yum! Not so large and impressive as the huge food market in Valencia, but a nice place to visit for the feast on the eye as well as the belly. Good local fresh foods, fruit and veg, cheese, meats etc. And NOT closed on Monday 🙂

Almeria Fortress Cathedral – at last something that was open for us to be able to see inside. Neither of us are religious people but we do appreciate good art, architecture and sculpture and a city’s churches and cathedrals often showcase the best there is to see.

The Cathedral of the Incarnation of Almería is the seat of the Diocese of the city of Almería. This site was holy ground long before the Cathedral was built, as a mosque once stood in the same place until it was destroyed by an earthquake in 1522. Two years after that, the construction of the Cathedral began in 1524. Completed almost 40 years later, the building’s architectural style reflects a combination of Gothic and Renaissance influences. The two towers visible from the façade, together with the merlons and protected paths, make it look more like a fortress than a cathedral. This is no accident. These forbidding defensive features were intended to protect the cathedral from pirate raids.

The fortress cathedral is rather special. It’s built differently to your regular cathedral, for example,the roof is flat so that cannons can be mounted on top for defense of the city. We took the audio tour and it was very interesting to see the architectural features that make the design of this cathedral different from others we had seen.

The inside is gorgeous. The architecture is stunning, the choir and organ are impressive and the cathedral ‘treasure’ on display is exquisite. It’s not so large as say Seville or Murcia, but the unique style makes it very much worth a visit.

Overall, we decided not to bother staying another day to visit the other places that had been closed. We just weren’t feeling the love for Almeria center. It was a bit grubby. If those places had been opened, we would have visited them and enjoyed it, but with so much to see in the world, and so many more amazing attractions calling us, time to move on and check out the next fascinating place to spend the night.