Medieval Conques and its awesome Abbey 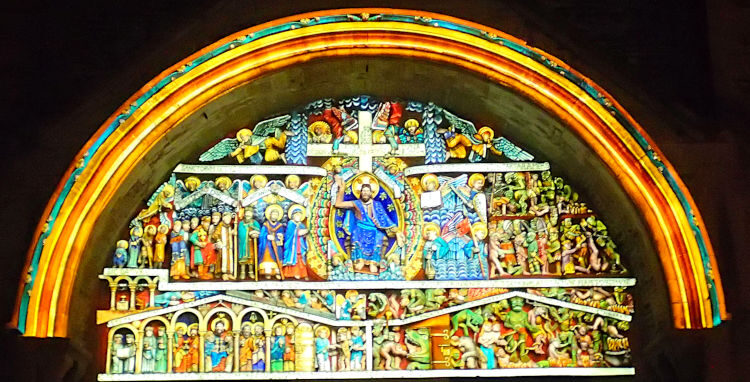 Conques is a beautiful old medieval village built on a hillside in a valley and it has an awesome Abbey.

We were visiting our friends Paul & Sue who live at Livinhac le Haut and one evening we all went to Conques in Paul’s car. After the trip there at breakneck rally speeds through narrow roads with an unprotected sheer drop off the side, we got near the village and drove over an old bridge that looked super sturdy but was the narrowest bridge we had all ever gone over in a car. If the car broke down we would have had to climb out of the windows to get out, we would not have been able to open the doors more than a couple of inches to try squeeze out. I think this may have been the asymmetric bridge which is known as the pilgrim’s bridge dating back to medieval times

We arrived in the early evening because then we could go into the Abbey and walk around the upper levels, which you couldn’t do in the day, and also to see the spectacular light show lighting up the tympanum above the Western doors of the Abbey.

However, first of all, we checked out the village. The oldest houses in the village date from the end of the Middle Ages and the streets are classicly narrow. The village was largely passed by in the 19th century and as a result, the historic core of the town has very little construction dating from between 1800 and 1950, leaving the medieval structures remarkably intact.

We were there before the crowds flocked in so we had a good view of the village without too many other people getting in the way of our photos, although it was evening so they aren’t very bright and colorful. This must be one stunning village when the sun is shining, nestled in glorious countryside.

The village even still retains some of its defensive ramparts and gates.

Conques owes its origins to a hermit. A man named Dadon retired in this then wild place at the end of the 8th century. A group of Benedictine monks soon joined him, who subsequently “obtained” the relics of Sainte Foy. Those relics soon started to attract a lot of pilgrims to Conques as they were apparently able to cure blindness!

After that Conques became a major stop-off point on the pilgrim route to Santiago de Compostela. Such pilgrimage with its loads of donations and offerings brought power and prosperity to the Abbey. The Abbey itself was built in the 10th to 12th centuries.

It was then time for us to go visit the Abbey. The crowd outside the doors got bigger and bigger until it was time to go in. The upper reaches of the abbey are only open at limited times and I think we were lucky to be there at surely one of the best ever. Our visit was at the same time as the musical performance.

Lots of people went to sit down in the many pews to watch and listen to a very talented harpist give a free performance but we queued up to go up into the upper level of the Abbey to see the intricate stone carvings and the magnificent arches.

When we were up there the acoustics were fabulous, parts of the walkways were vast and the views were spectacular. It was a completely magical visit to up in an area where you aren’t usually able to visit.

The tympanum (carved ‘picture’ above the main doorway) of the Last Judgement is considered to be one of the major artworks of the 12th century. There are 124 sculpted figures composing the Last Judgment and depicting the celestial Court, the angels, the elected, the condemned and other devils. It really is incredible and because the tympanum is sheltered below a deep barrel vault the 124 figures sculptured from stone in approximately 1125 are in a relatively good state of repair. They even retain some of the original paintwork.

In the representation of Hell, everything is arranged in order to frighten the illiterate, the big majority of the population in those medieval times, as is revealed by the quotation engraved on the lintel base, the English translation being – “O sinners, change your laws for you might face a cruel judgment”. As if to strike the mind, vivid colours highlighted the sculptures. Some important remains are still visible with a dominating blue for Paradise and red for Hell.

It was then time for the light show and it truly was nothing like we had ever seen before anywhere in the world. Created by numerous lasers dotted all around the square in front of the abbey, the various parts of the stonework were highlighted with lights of their original colors, exactly overlaying the stonework for the perfect 3d image.

Small parts were lit up and then the whole thing.

The detail that was shown and the colours were simply stunning.

We took a short video but it really didn’t turn out very good being handheld in the low light, but if you look below you can see part of the spectacular light show taken from the Conques Marcillac office of tourism website.

Overall we had a fabulous time in Conques. It was original and the idea of the light show was a one-off as far as our trip goes so far! A huge thank you to Sue and Paul for taking us on such a spectacular evening out.