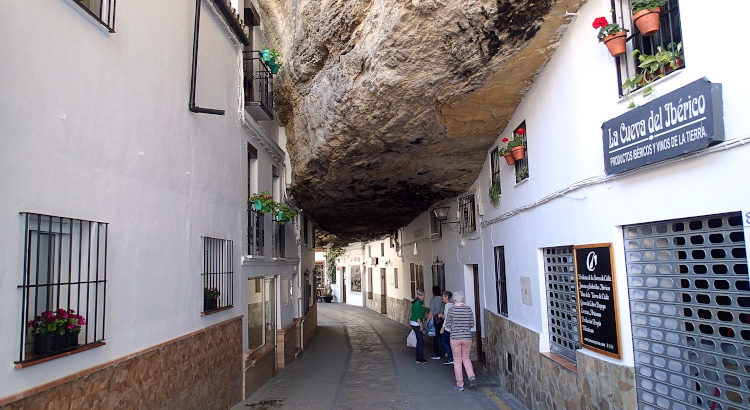 We’ve been to the beach resorts and we have been to a number of the big cities that Spain has to offer so now it was off to the countryside to visit some of those famous towns of Andalusia that have whitewashed houses built into the surrounding cliffs. It’s so charming to stroll around the typical picture-postcard Spanish villages.

The cross country drive was gorgeous and very scenic, albeit a bit narrow and windy. There were long stretches of road that weren’t wide enough for people to pass us in the motorhome and we drove with some concern about what would happen if we met another camper, or a truck or bus. But luck was with us, and we didn’t need to reverse once. Phew.

We parked our motorhome just out of the town centre in a new residential area that was being developed and took the easy walk in. It was a lovely easy walk downhill following the valley and small river on a bright sunny day. As we approached the village there were swifts flying all around, catching flies.

It was a really good idea to walk as when we got down to where all the action was the only vehicles that could go down that road were pretty much small delivery vehicles and cars, but definitely not 25 feet long plus motorhomes.

In great Spanish style if there is enough room for a restaurant to put some tables and chairs onto the pavement or even out onto the road then they do. Here, the tiny bar was inside the small building under the rock, just enough room for a row of drinks, a till and a barman, and all the customers sat outside. It surprises us how, even in the Winter, Spanish people seem to be quite used to sitting outside to eat, even if it means wearing a heavy coat, scarf and gloves! Today that wasn’t necessary though!

Besides a number of the houses and restaurants being built into the side of the cliff at road level, there were also lots of pathways going up the side of the hills where more whitewashed houses were built right under the overhanging rocks.

Some of these areas offered great photo opportunities for us at the various miradors. We could look down on some of the areas where we had just walked as well as having great views of the many houses built along the side of the valley.

Like most towns, you have bustling areas where all the visitors seem to congregate and all the businesses try to get you to spend your hard earned money. And then there are other areas just around the corner which are quieter, sometimes a little rundown where hardly anyone goes. It was a little sad to see so many of the houses against the cliffs looking in such bad shape, derelict, with for sale signs that looked years old, and the damp and weeds growing on the walls and roofs.

A bit like the gypsy quarter we visited in Granada, we suppose these tiny houses lack the modern facilities that people are looking for now, and with the damp from living under the rock, they probably cost a lot to modernise and maintain.

Our favourite street of whitewashed houses was actually over the little bridge on the other side of the river valley, the ‘shady’ side of the road. This place looked like this huge rock had fallen down the cliff and was being supported by the houses. It’s quite something to see!

What a fabulous place Setenil de las Bodegas was. It was quaint and not at all over-commercialised. Probably packed in the summer though! It was then time to make the easy walk back up the valley road to our motorhome.

After a steep and narrow descent into the village and across the bridge, there is a very steep climb up a very narrow road with constant hairpins bends to get out of Setenil, with cars parked everywhere. Deb was driving again (she always seems to get the more challenging sections) and we were lucky it was siesta time, mid-week and in the offseason or I don’t know how we would have got through it with the van!

Tomorrow we will visit Arcos de la Frontera, however, we had to find somewhere to park the van for an overnight stay so that we could do our sightseeing in the morning. We were lucky to find a beach even though the sea is 50 miles away!

We found a fabulous lake where the council had added some sand to the edge so it was like being at the beach. It was very nice with sand, grass, lots of trees, showers, toilet, and great views up to the pretty white town of Arcos De La Frontera on the hill opposite. There were even taps where we could fill up with fresh water if we needed to.

When we arrived it was full of children and some teachers all enjoying themselves, having some kind of games on the beach. They stayed there for hours making a lot of noise and then a coach came to pick them all up and there was peace and quiet. We almost had the entire beach to ourselves.

After 5pm lots of people arrived from work and some stayed on the beach until gone 10pm. There were families, teens playing sport, people jogging or just reading. It really was a great place, and very quiet for the night.

And in the morning we were woken early by a really weird sound. You know you wake up a little groggy and you are not quite sure what is going on but you know the sound but you just cannot put your finger on it. Well, just the other side of the road in the field was a hot air balloon inflating the balloon. We could hear the sound of the gas burner as it heated the air. By the time we got up and dressed to get a photo, the balloon was floating off in the direction of the town. You can just see it in the picture above.

We drove the van a lot closer into town to do our sightseeing for the morning and left it on a car park close to the bus station. The town gained its name by being the frontier of Spain’s 13th century battle with the Moors. The first thing we photographed when we were there was this really weird group of religious stone statues. No info there so we aren’t sure what this is supposed to represent but it’s kinda sinister!

We then wandered around the town following lots of narrow alleyways until we got to the top of the hill where there was a huge old church.

At this commanding height, we were able to look out over the surrounding countryside. It didn’t quite have the same impact as the expansive views from the parks and miradors of Rhonda, and there were more development and housing in the valley, but still a great place to stop for a picture.

Sadly at the same spot there was a man with captive birds. For a few Euros you could have your picture taken holding an owl, or a hawk or eagle. The birds looked so sad and scared being handed around to all these strangers. Why do tourists still keep promoting this sort of animal cruelty by giving these people money? It really saddens us to see it. I suppose in a country where people enjoy bullfighting, we shouldn’t be surprised.

While we were walking around we had noticed a number of ladies adding some of their crochet pieces to the trees on the side of the roads. It looked so pretty. They were ‘Yarn-Bombing’. Lots of pieces of crochet had already been hung above the alleyways between the houses.

And above us on one street there were even big crocheted blankets that were providing shade to the many visitors down below. It was so lovely to see arts and crafts being celebrated and displayed in the town in such a proud way. We don’t know if it had always been a tradition of the town or was something quite recent, but it was a welcome addition that everyone seemed to enjoy.

The charming winding and cool streets were a delight. It was so intriguing every now and then to walk past a home with the door open onto the street and be able to peek inside at their colourful courtyards and fountains. It all seems so tight and enclosed when you are out on the street, but the homes look bright, airy and so lovely behind the closed doors.

Cake anyone? Our only disappointment of visiting Arcos de la Frontera was that when we went to the Convent to buy some of their very famous cakes they were closed. I guess at 10.30am we were there at a prayer time. Usually the nuns are silent and don’t interact with us outsiders, but in this convent they have a small revolving window where you can buy their cakes, which helps support the convent. We were sorry not to be able to enjoy a nun-made cake. That would have been a first for us.

It was then time for a coffee, some lunch and we were off to our next adventure at Jerez. More on that coming soon!