Church of Colonia Guell, an unfinished masterpiece by Antoni Gaudi 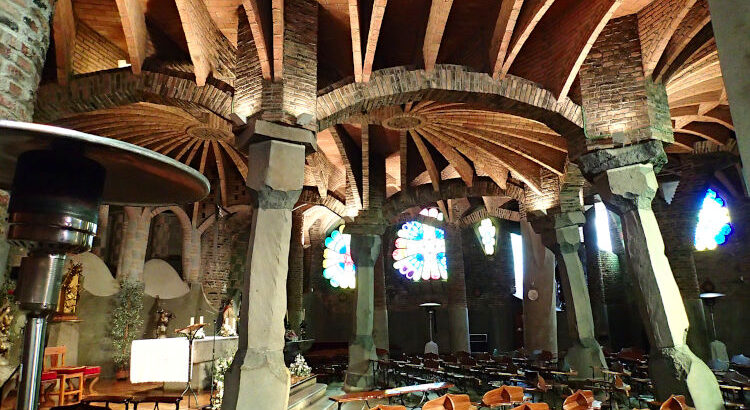 The Church of Colonia Guell is a masterpiece by Antoni Gaudi that was never finished. It was supposed to have been a large community church on top and a crypt beneath but only the crypt was ever finished and this is now used as a small church today. Gaudi used this church as a test for the construction of his biggest work, the Sagrada Familia Cathedral. However, unfortunately, the benefactor (Count Eusebi de Guell), and life long friend of Gaudi, ran into financial difficulties and the project was eventually abandoned.

Back in the late 19th century, at the height of Spain’s industrial revolution, the success of Barcelona industry caused new problems for local factory owners in the city. It became more and more expensive to buy land and then to construct your new factory. Also, there had been some civil unrest with factory conditions, long hours, wages etc.

At that time a number of industrialists around the world began to build ‘worker colonies’ outside of the cities. Large estates were built which besides the factory buildings also had housing for the workers, schools, hospitals, markets and shops. It was more economical to build an entire estate (or village) in the countryside than to build a factory in the city.

The industrialist entrepreneur Count Eusebi de Guell did exactly this in the small community of Santa Coloma de Cervello, 14 miles (23kms) to the South-West of Barcelona. This social innovator who cared about the working conditions and well-being of his employees began construction on the Colonia Guell in 1890.

He had his textile mills built along with his industrial village with amenities. They included terraced houses, shops, cafes, library, theatre, school (for boys only), he employed a doctor, built gardens and a church. Eusebi Guell employed some of the leading modernist architects of the day to build his village, resulting in some beautiful spacious buildings.

Antoni Gaudi was commissioned by Eusebi Guell to design the church and his project consisted of an upper and lower nave, towers at the sides and a belfry measuring 130 feet (40 metres) tall.

The Gaudi Crypt of Colonia Guell is one of the architect’s best-kept secrets, probably because of its location, out of the city. Not as many tour buses get out that way. It’s not uncommon to get the place to yourself, as we had today. It actually has good transport links to the centre of Barcelona today, but with so much already to see in the city, only the die-hard Gaudi fans venture out to the far-flung masterpieces.

Projected in 1898, however, the work was not started until 1908, 10 years after commission. The crypt is built in the most interesting basaltic stone bricks with mosaics.

In the upper part of the door, there is a ceramic composition which shows the four cardinal virtues – prudence, temperance, fortitude and justice.

It’s a typical example of Gaudi architecture built with coloured materials and textures similar to soil and vegetation. It was built partially below ground, due to being on a hillside, and it was designed so that it would feel like it belonged in the surrounding nature. It seems to integrate perfectly with the surrounding grove.

When you stand on the roof of the crypt it becomes even more obvious that this is an unfinished project. You can see the doorways for the church and the bell tower next to them which are the only parts of the church that were built, besides the lovely marble floor, or roof as it is now.

Here’s a close up of the unfinished church doorways.

And then you get to step inside and just WOW. The original crypt was turned into a church.

The interior of the crypt has five aisles – a central one and two more on each side. Gaudi designed a church that has an irregular oval design inside.

Two of the columns have these beautiful giant ocean clamshells balanced on these painted wrought iron stands.

The crypt is very dimly lit, due to it being built partially underground since the structure is on a hillside.

There are, however, 22 lead stained glass windows in the crypt, to let in some colourful lighting.

Gaudi got to test many of his ideas and theories here at the Church of Colonia Guell since Eusebi Guell gave him the liberty of being as creative as possible.

He included in this church some of his architectural innovations for the first time. He used catenary arches, outer walls and vaults in the shape of hyperbolic parabolas and decorative broken mosaic tiling, known as “trencadis”. He also introduced his own ergonomically designed benches. As usual with a Gaudi design, every single thing was individually designed down to the door handles, window latches, the altar, all of the furniture and fixtures and fittings, the lighting etc.

Although the project with Gaudi finished in 1914 because of financial problems, because the lower nave was almost complete money and a new builder was found. Between the years of 1915 and 1917, the upper nave was enclosed with brick walls and an asbestos roof and therefore the church was completed and ready for use.

The existing nave was consecrated, by which point the church had begun to be known locally as the ‘crypt’ owing to its single chamber structure.

In 2000, local architects set about repairing the crypt. This took away aspects of the unfinished nature of the buildings up on the now roof, for safety. However, it did present a more tourist-friendly structure and visitors were then able to stand on the roof, where the floor of the upper part of the larger church would have been.

The Crypt was declared a World Heritage site by UNESCO in July 2005.

The mill closed in 1973 due to the crisis in the textile sector. In the year 2000, refurbishment began on the more than 20 unique buildings in the Colonia Guell village, one of which you can see above. It’s a truly unique place to live today, in the workers village, with all of that interesting architecture. Restoration of some of the buildings continues today. The small tourist office has an interesting museum about the village, the church and life for the factory workers, and a map you can follow of interesting sights and facts about the Guell community.

The parking, including allowing us to sleep in our vans overnight, was extremely close to Gaudi’s Crypt. See the red arrow above. The coordinates were 41.365193 and 2.025568. There were no facilities but the spaces were huge and at night for sleeping it was super quiet. Good to park up for free and visit the village and crypt, or even to catch the train in to Barcelona from here.