Santo Domingo on the Way of Saint James 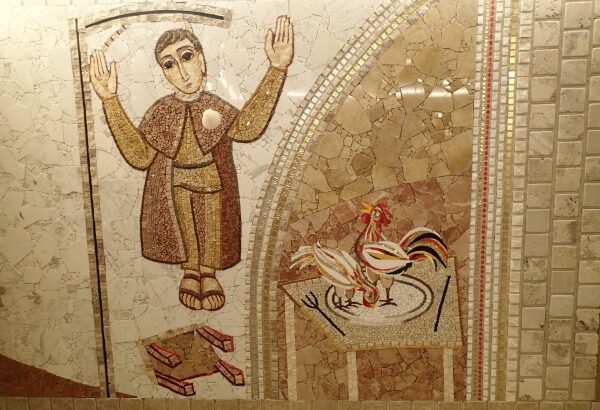 Santo Domingo, due south of Bilbao, is a small town in the La Rioja area of Spain, wine country. It’s where people stop off on the ancient pilgrimage route from France and get to see the Cathedral of Santo Domingo de la Calzada. This route was the French Way, the most popular route of the Way of Saint James to Santiago de Compostela in Galicia, Spain (North-West Spain).

The route runs from Saint Jean Pied de Port on the French side of the  Pyrenees to Roncesvalles on the Spanish side and then another 780km on to Santiago de Compostela through the major cities of Pamplona, Logrono, Burgos and Leon. A typical walk on the Camino Frances takes at least four weeks, allowing for one or two rest days on the way. In 2017 roughly 60% of pilgrims travelled to Santiago de Compostela via the French Way according to statistics gathered by the Pilgrim’s Office in Santiago. We did see a few walkers on the road and a number who looked quite tired sat around the Cathedral.

Saint Dominic de la Calzada (or Dominic of the Causeway) was born in 1019 and died in 1109. When we were there it was 1,000 years since his birth which the town was celebrating. Born Domingo Garcia, he was the son of a peasant and became a shepherd. He tried to join the Benedictine Order twice but was turned away both times. He then became a hermit near the Santo Domingo until age 20.

At 20 he began working with the Bishop of Ostia to combat a plague of locusts of all things. For all his fabulous work he was then ordained a priest. With the Bishop, he started working in construction where he found his true skill and calling as an engineering genius. He built a wooden bridge over the River Oja to help pilgrims on the Way of St.James. After that, he began to build a causeway, which served as an alternate route to the traditional Roman causeway.

To better the conditions of the pilgrims that began to use his new causeway, he replaced the wooden bridge that he had built with one made of stone and constructed on the site of an old fort, a building that served as a hospice for travellers, which is today a hostel for modern-day pilgrims.

Due to the development of his public works projects, he is the Patron Saint of the Spanish Civil Engineers. Miracles are attributed to Dominic, among them the healing of a French Knight who had been possessed by the devil and who was freed of his affliction by visiting the grave of the saint. Another concerns the healing of a German pilgrim named Bernard in the fifteenth century, who was cured of an affliction of the eyes by visiting the saint’s tomb. Another concerns the healing of a blind Norman who was cured when he visited the cathedral.

The most famous miracle, however, concerns that of the rooster and the chicken, which is said to have taken place at Santo Domingo de la Calzada. The story goes that in the 14th century, a German 18-year-old named Hugonell goes on the pilgrimage with his parents. A Spanish girl at the hostel where they were staying makes sexual advances toward Hugonell but good religious boy that he is, he rejected her advances. Angry at this, the girl hides a silver cup in the German’s bag and then informs the authorities that the youth had stolen it. Hugonell is sentenced to the gallows, in accordance with the local laws and hung.

His heartbroken parents continue on their way for their pilgrimage.

On their return from Santiago, the parents follow the same route in reverse and sadly decide to examine their son’s body, still hanging on the gallows, but suddenly hear his voice. He tells them that Saint Dominic has saved his life. His parents quickly make their way to Santiago de Compostela to see the magistrate and ask for their son to be cut down as he still lives. The magistrate, who is at the time eating dinner, remarks: “Your son is as alive as this rooster and chicken that I was feasting on before you interrupted me.” And at that moment, the two birds jumped up alive from the plate and begin to sing and crow happily.

In memory of Dominic’s miracle, a rooster and chicken, with white feathers, are kept alive at the cathedral all year round and yep we saw them. A different rooster and chicken are switched each month. They are said to be descendants of the original birds who miraculously danced even though roasted.

The town had a most novel way of celebrating it’s interesting history – with Lego! We saw this gigantic lego construction of the town, the cathedral, the gallows and the indestructible chickens. It was epic, much longer than can be seen here, and told the story of the town’s history and miracles.

And for the 1,000-year celebration, there were all kinds of models built showing construction techniques in medieval times. The one above shows how Dominic would have kept the river at bay, allowing him to build a leg or support of the bridge. This exhibit was one of the most fascinating we’ve seen so far on our travels and really shows the ingenuity of the time.

Down in the Crypt of the Cathedral were some amazing modern wall mosaics. And as normal our photographs do not do these magnificent mosaics justice. Their detail, colour, texture, shine, were totally gorgeous.

The mosaics were made in the most beautiful and colourful and shiny stones that just looked exquisite.

That was pretty much it for the Cathedral. We did visit a few other buildings around the town including The Tower. The tower we went up was the FOURTH one. They didn’t seem to have too much luck with their tower. The first one built at the end of the XIIth century was destroyed by lightning in 1450. Construction ended on the second one in 1560 and collapsed in the XVIIIth century. The third one had to be dismantled after a year because the construction was unstable owing to underground water flow.

The final and fourth tower which still stands today was finished in 1765 and was built a few yards from the Cathedral, presumably on more solid ground. The current tower is 69 meters tall and still, even this one has problems when we were there. Some restoration work had been recently carried out on the outside and had finished and the scaffolding had been taken down in time for the 1000 year celebration. But then a big piece of the restoration fell off and crashed to the ground. It looked like it had been stuck on, cemented on presumably, and then just fell off. Modern builders eh? The scaffolding was put back up and investigations and more renovations had started to put right the shoddy work done the year before.

We had a fun time in Santo Domingo where there is a saying which goes, “Santo Domingo of the way, where the rooster’s crow after being roasted”. for such a small town it knows how to pack in all the attractions.

From park4night we spent the night up on a hill overlooking Santo Domingo before visiting the town the next day. It was super quiet, just us with a few locals visiting late and early on walking their dogs. There was a small park next to where we were parked which had some long narrow white tubes set out a set distance apart so that satellites could precisely coordinate GPS. Of all the places to find this, in the middle of nowhere. Sorry, no photos.