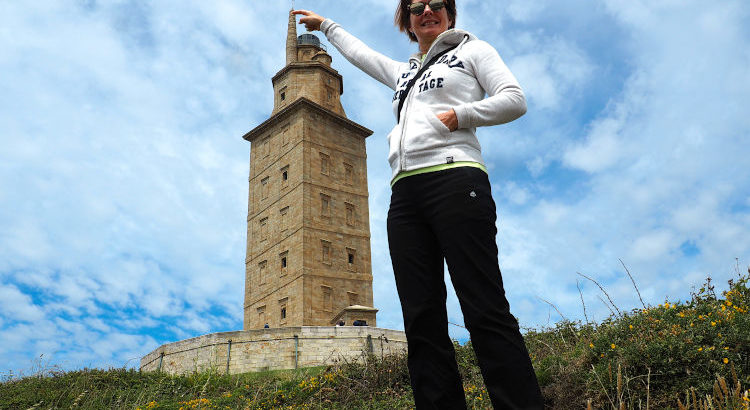 The Tower of Hercules is the oldest working lighthouse in the world. Built in the 2nd Century, in the time of Trajan, and later renovated in 1788 by order of King Charles IV of Spain.

It still stands guard over the headland of A Coruna today standing 55 metres (180 feet) tall. Its light is visible from a distance of 32 miles, warning and guiding ships and their precious cargos. This region is notorious for shipwrecks, earning it the name Costa da Morte, “Coast of Death”. The Romans who conquered this region of Spain believed it to be, in a figurative sense, the end of the earth—whence its name, Cape Finisterra.

Believed to have been designed and built in the image of the famous lighthouse in Alexandria (a wonder of the ancient world), this lighthouse has some impressive Roman design and engineering.

Originally the way to climb the lighthouse was by a set of ramps that curled around the outside of the main structure, but over time these decayed and crumbled. In the 18th century, a ‘skin’ was added to the outside of the original Roman structure, thus preserving it. A staircase was built up the inside to allow access to the refurbished lamp and new larger housing for the lamp was built on top.

It would have originally have provided a beam of light through the use of a large oil reservoir, a wick and a flame, which was directed and amplified by a convex mirror. Part of the original lamp can still be seen in the small museum and info centre in the foundations of the refurbished lighthouse.

According to mythology, Hercules cut off the head of the giant tyrant Geryon, after three days and three nights of continuous battle, and built this monument after burying his head with his weapons below.