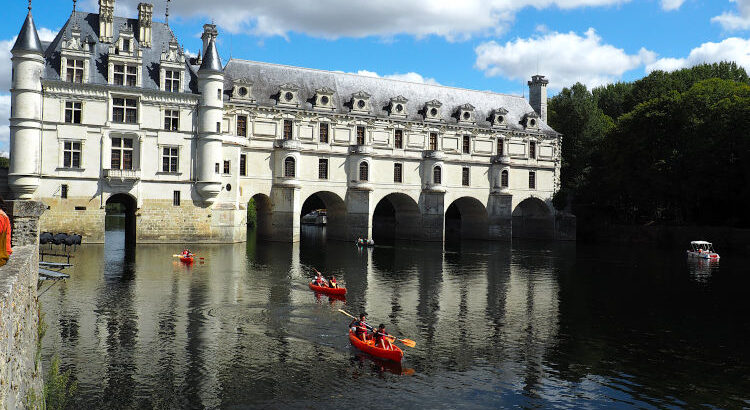 The Chateau de Chenonceau is the most visited and photographed chateau of the Loire Valley in France. It’s an amazingly beautiful chateau that again, like Villandry, is a must-see chateau to add to anyone’s list. It has an incredibly interesting history with a feminine touch and is known as The Ladies Chateau because it has been very much shaped by the important and formidable women who lived there.

This chateau has seen them all from heiresses to mistresses, to Queens. And often the chateau has changed hands between them as they fall in and out of favour with the King. There have been epic theatrical parties there that literally broke the bank. Fortunes have been spent there.

And in one instance the chateau was torn from the hands of a mistress in a very public act of vengeance. And it has even been a place of great sorrow and mourning, following a death, with one of the rooms decorated entirely in black.

To build the chateau on the River Cher in the 16th Century Thomas Bohier, and his wife Katherine Briconnet demolished the fortified castle and mill (purchased in 1512 from the Marques family) and left standing just the keep – the Marques Tower, which they restored in Renaissance style. The layout of the forecourt is a copy of the former medieval fortress surrounded by moats.

Katherine was the true developer of the chateau as her husband was the Comptroller-General of Finances to King Francis the 1st and spent most of his time away at war. Built to the plans of a fashionable Venetian Palazzo Katherine was the first of the “Ladies” of Chenonceau, who would play a major role in the embellishment of the complex and its gardens.

The chateau was later given to the monarchy of France to pay-off debts and to be used by them to stage hunts and festivals. Henri II donated Chenonceau to his favourite lady Diane de Poitiers, who was once his governess, but became his mistress even though she was 20 years older than him. Diane, the second “lady” of Chenonceau was renowned for her beauty, intelligence, and sense of business. She created the gardens which at the time were some of the most spectacular and modern in the whole of Europe. She also built a bridge on the River Cher so that she might hunt on the other side of the river. I don’t suppose there were such things as planning permission in those days. If you were the King’s mistress you could do these things.

On his death of King Henry II, his widow Catherine de Medici (stout, not beautiful, but resolute) chucked Diane the mistress out of Chenonceau, even though by then Diane was its legitimate owner. We shouldn’t feel too much sympathy for Diane as the “Eternally Beautiful” lady of Chenonceau would finish her days in the nearby castle of Anet.

Catherine, the third “Lady” of Chenonceau” made the gardens even more magnificent. Catherine also added the glorious two-floored gallery on top of Diane’s bridge, which makes for one of the most romantic photos in the Loire. Chenonceau chateau now had its iconic look.

She threw world-class garden-parties (transvestites, nymphs, satyrs, etc) and parties in the gallery which was effectively a grand ballroom with 18 windows. As Regent, Catherine governed France from the Green Study, introducing in Chenonceau Italian sumptuousness and establishing the authority of the young king, who at that time was still too young to govern.

The fourth “Lady” of Chenonceau was Louise of Lorraine. In 1589, on the death of her husband Henry III, she withdrew to the chateau and went into quiet and isolated mourning, in white, which was required by court protocol. Forgotten by all, she had trouble maintaining her queen-dowager lifestyle. She devoted her time to reading, charity work and prayer. Her death marked the end of a royal presence at Chenonceau.

The fifth “Lady” of Chenonceau was Louise Lupin, who in the 18th century, as the exquisite representative of the Age Of Enlightenment, gave renewed splendour to the chateau. She started an outstanding salon with the elite among writers, poets, scientists, and philosophers, such as Montesquieu, Voltaire or Rousseau. As a wise protector of Chenonceau, she amazingly managed to save the chateau during the French Revolution, which was no mean feat.

The sixth “Lady” of Chenonceau in the 19th Century was Marguerite Pelouze. Descended from the industrial bourgeoisie she decided in 1864 to transform her new home and gardens according to her taste for luxury. She spent a fortune on restoring the estate for it to resemble the way it was at the time of Diane de Poitiers. However, a sombre political affair caused her ruin and she had to sell Chenonceau.

The seventh and final famous “Lady” of Chenonceau was Simonne Menier. During the First World War, far from the trenches, Chenonceau also knew the troubles of wartime. Simone Menier, the matron, was in charge of the hospital installed in the chateau’s two galleries, transformed and equipped at her family’s expense (Menier chocolate factory). Over 2,000 wounded were looked after at the chateau, up to 1918. Her bravery led her to carry out numerous actions for the resistance during the Second World War.

After admiring the views from the outside it was then time for us to go into the chateau. This is the beautiful Chapel where the stained glass windows were replaced in 1954 after being destroyed by bombs in 1944.

This is the kitchen with plenty of pots and pans and jelly moulds. A good audio tour is included which expanded on the history of the chateau and gave insight into the lives of those who lived their and how they lived within its walls.

That’s some big modernish cooker. In medieval times most of the cooking was done in the other room where there was the largest fireplace in the chateau. With all of those lavish balls and banquets in that stunning ballroom over the river, they’d have needed an army of cooks and waiting staff.

The kitchens were actually located in the two enormous bases forming the first two piers built in the bed of the Iver Cher. There were ingenious lifts that picked up produce brought to the castle on the river.

This is the hallway which has a stunning ribbed vault ceiling. This place certainly has style and must have been sumptuously decorated in its day, filled with celebrities and royalty.

Lots of floors were beautiful Parque, while others were tiled and in their day they must have been stunning. In the areas where people walked on the tiled floors and below windows where the sun shone the tiles were badly faded. But look at the colour of those tiles in the corner of this room.

The art in some of the rooms was stunning. This is the Three Graces by van Loo. And there were also valuable paintings by Rubens and van Dyck.

And here are some more paintings of some of the more famous people who lived or stayed at the chateau.

Some of the fireplaces were magnificent. Look at this one built specifically to showcase the painting. The carving was some of the most spectacular we’ve seen.

And then there were splendid bedrooms whose furnishings were sumptuous and ceilings were something else! Can you imagine the riot of color and pattern in these rooms when everything was fresh and bright. The carpets, the drapery, the painted ceilings, the tapestries on the wall, the furniture – all of the highest quality, the brightest colors, the most modern of their day. Quite overwhelming most likely by today’s more minimalist style.

This was stood next to the “Three Graces”. We have one of these in storage in England, not.

And for the final photo, this is the view inside the famous double-tiered gallery (ballroom), above the bridge, that everyone likes to take a photo of outside. It’s one of the busiest places in the castle so impossible to get a photo without people but we were lucky again to be here at a reasonably quiet time.

We had a fabulous time at Chateau de Chenonceau, it was stunningly beautiful and there was so much interesting history. Entry was €14.50 per adult and an additional €4 for the audio guide. The visit comes with quite a good brochure describing all the rooms and history.