Following the Owl trail in Dijon 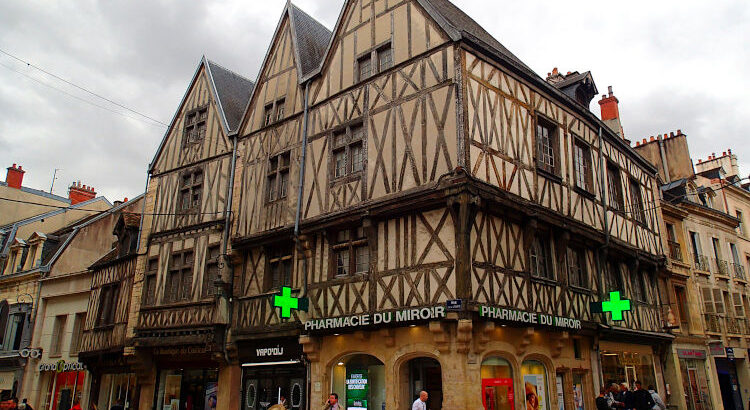 Dijon is the capital city of the historical Burgundy region in eastern France, one of the country’s principal wine-making areas. It’s known for its traditional mustard, vineyard tours, autumn gastronomic fair and building styles ranging from Gothic to art deco.

It’s clearly a thriving city today and in its past was clearly a very wealthy and important city throughout the ages.

There are lots and lots of very nice buildings in Dijon. A huge variety in the city’s architecture over the years, but none of it dull or ordinary. Everything has been built with the care and attention of a city that has style and modernity, whatever the age.

Dijon was a place of tremendous wealth and power and one of the great European centres of art, learning, and science.

The Duchy of Burgundy was key to the transformation of Dijon in medieval times towards early modern Europe.

The whole city is a fascinating mix of the medieval half-timbered shops and houses and the more modern gothic and renaissance style. It’s very similar in some ways to Bath (near to where we were born) with the same very light-coloured stone used.

Dijon was a really beautiful city to walk around. The historic centre is easily covered on foot and most of it is pedestrianised, dotted with beautiful squares and plazas, both large and small.

It’s also a city with religious history, it has more than its fair share of churches with more than 100 bell towers in the city.

The Church of Notre-Dame of Dijon is considered a masterpiece of 13th-century Gothic architecture. On the West side, it has 51 gargoyles that are dummies, in that they are decorative rather than actual drain spouts. According to the account of the monk Etienne de Bourbon, the original gargoyles were in place for only a short time. They were removed around 1240, following a fatal accident. A usurer (moneylender who charged high-interest rates) was killed on the church forecourt as he was about to get married. One of the stone figure gargoyles representing a usurer became detached and fell on him. It was not until 1880-1882 that the dummy (false) gargoyles were chiselled and put in place.

On the North side of the church on the corner of a buttress is an owl, that is thought to be the personal mark of a stonemason. Over the centuries this owl has become a good luck charm for passers-by who rub it with their left hand – the hand closest to their heart. The owl sculpture continues to serve as a symbol of the city.

The office of tourism chose the owl in 2001 as its symbol for the Parcours de la Chouette (Owl Walk), a tourist trail around the historic centre. There are 22 square plaques that mark out the walk, each one bearing the image of an owl. We spent €3 for our copy of the guidebook laying out the city’s owl tour which was basic but very useful.

Dijon’s Cathedral that was built between 1280 and 1325 was nice but not so striking as many others we had visited on our trip so far. You can visit the Romanesque crypt for €2 but we didn’t go in. The decorative tiled roof is common in the region.

It was then time for us to visit the vast Palace of the Dukes which was a mighty big place. It now houses the Museum of Beaux-Arts and the Town Hall, which must be a lovely building to work in.

It was actually FREE to get in which for France was a huge bonus and a big shock to us. We’ve been used to paying out lots of cash getting in all these places so far. Because it was free we weren’t expecting much but WOW!! What a place it is. We could not have been more wrong. The museum was massive with 50 rooms, some of which were huge, to visit over 4 floors. The map had a very confusing layout and we got lost a few times but we got to see all 50 rooms.

It holds everything including a rich collection of paintings, sculptures, crafts and antiquities dating from the middle ages all the way up to the 20th Century. There were exceptional items all in excellent or extremely well preserved or restored condition. It was simply fantastic. The wealth of the place and what the value of some of the items must have been would blow your mind.

There were so many amazing things to see we could have stayed there all day. We’ve picked out a few of our favourites. The first absolutely magical item was the Altarpiece of the Crucifixion by Jacques de Baerze from 1390-1399.

It was amazing the fact that you could get right up to it to check out the incredible detail of the carving.

The absolute best thing to see though was when we visited the tomb room for two of the dukes. It was a real WOW moment. A monumental room with fantastic caskets and detailed sarcophogi with a backdrop of a stunning and massive fire place.

The single tomb is of Philip The Bold who died in 1404. His wife Margaret III
decided to rest her remains with those of her parents in Lille.

The other double tomb is of Philip The Bold’s son John The Fearless who died in 1419 and John’s wife Margaret of Bavaria.

The tombs were both erected in the same style with painted alabaster effigies with lions at their feet and angels with spread wings at their heads. Underneath the slab, the effigies rested on, unpainted small (about 40 cm high) “pleurants” or mourners (“weepers” is the traditional English term) were set among Gothic stonework.

These pleurants were stunning! It was undoubtedly some of the best stone carving we had seen in our travels. Really quite a lost for words experience.

To get a different view of the tombs we were able to go up one floor and step out onto a mezzanine level and look down on the room. Look at that amazing fireplace in the background. But wait, just look at the photo below and then look again to appreciate the scale.

And now look at that fireplace again! How big?

Another awesome room to visit was the Statues Room. Without even looking at the statues the room was incredible just by looking up at the ceiling. It was something very special.

Musee des Beaus-Arts is one of the oldest museums in France when it was opened in 1787. At that time it was made up of two rooms including the Statues Room. In those years I doubt they let anyone in. It would have been a very private collection.

The museum actually opened its doors to the public in 1799.

There really was so much to see at this museum. It would have been very easy to take a thousand photos. If you wanted to make a museum today and fill it with beautiful things, this would surely be the place to come for inspiration.

Talking of photographs some of the paintings seemed to capture the faces of the models as well as a modern-day photo. The painting of the lady top left is La Japonaise au bain painted by James Tissot in 1864.

And then there were these three paintings and a chest of drawers. The painting in the top left is Fishing Boats Leaving The Port by Claude Monet painted in 1885.

The Fine Arts Museum in Dijon, which was free to get into, turned out to be one of the best museums we have been too ever, anywhere in the world. It was an absolute gem!

We then went to visit the covered produce market (built 1873-1875) in the afternoon and although we were there on one of the days it was open (Tuesday, Thursday, Friday & Saturday) unfortunately it was closed (empty) in the afternoon.

That was pretty much it for Dijon. We had a blast.

We parked our motorhome in a small car park next to a nice park on the outskirts of the city. It was about a 20-minute walk into the city and about another 5-minutes to get to the centre and the tourist office, where we bought our Owl Guide and started our tour of Dijon. It was free to park and stay overnight, although there were no services. Dijon is very much worth a visit, take the Owl Tour and do not skip that Fine Arts Museum.