The sun returns in Gijon 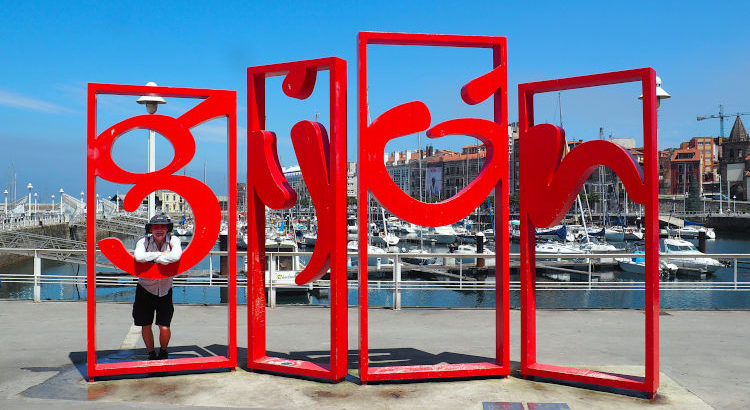 It’s been 24 days since we had a day that was sunny AND warm. What’s wrong with that? What a terrible summer we’ve had! We arrived in Alcobaca and it was so hot and sunny that we ran the air conditioning. While we were there, the weather changed, it became cloudy and gloomy, then cold and wet. Two days later we were running the heating in the morning, in June!. It’s not really changed much since in the past 24 days throughout Portugal and now into Northern Spain. Cloudy, gloomy and cold, and this last week, raining a lot too. It’s a lot like the weather that you get in England regularly in June. But today the sun came out and shone beautifully all day.

It feels at last like the bad weather has broken – just in time for us to be making our way into the cities in the center of Spain when we really would have welcomed some cooler conditions. The center of land masses are colder in the winter and hotter in the summer. There is currently a huge heatwave across parts of Europe and especially France as we write this, so we’ll be keeping an eye on the weather and may decide to change our plans and miss out on places like Madrid if it’s just going to be too hot. We don’t mind, we can always stop to cool off, buy an icecream or sit in a breezy park somewhere. But for Scruffy shut up in the motorhome, if its 40 degrees outside, it’s going to be hotter inside and the poor little chap will boil!

Anyway, thank goodness for some sunshine and the chance to visit pretty Gijon on the coastline. Said to be one of the most beautiful cities in Spain, it’s very much a city of two halves. The older part of town sits on the headland with its narrow streets, pretty plazas and cobbled streets.

Then the town changes as it expands. There is a large expansion program around the turn of the century and many of the impressive buildings have a distinctive Art Nouveau or Art Deco styling to them. It appears, however, that since then sadly many of them have been converted or updated, or even pulled down and rebuilt in a more modern (shall we say ugly) style.

It was during the work in 1903 to expand the city and modernise that excavations revealed the preserved remains of the Roman Baths. These are now a small museum remaining in situ with the street level and square rebuilt above them. Sadly none of the displays or films were in English, but it’s a Roman baths, they are pretty explanatory by now. We’ve seen quite a few nice ones recently.

We had parked right on the outskirts of town, next to a lovely big park, and right on the coast. There is a wide promenade right around the bay and the steps down to the beach are all numbered which is a nice touch. Our closest steps were number 24, which lead down to dog beach! Dogs aren’t allowed on all the other beaches so they all come to steps 24 and have fun as a big group. I have to say I feel the best part of the day was at steps 24 watching all the dogs enjoy themselves at the beach, swimming, splashing, running and digging and catching things. If you get a chance and need a smile, pop over to steps 24 and watch the dogs enjoying their day at the beach.

Right where the Roman Baths were there was the headland that the Romans used to protect with one of their amazing walls, however, we couldn’t see any signs left of the wall. All the stonework had presumably been “Robbed out” to build newer buildings like churches etc. There was a church right by where the wall used to be, called the church of San Pedro.

Then up on top of the headland (Santa Catalina Hill), we found some much modern battlements – emplacements for cannons etc and there was also the weirdest monument. Called Eulogy to the Horizon in English, this mammoth sculpture is one of Gijón’s most famous sights.

Created by the celebrated Basque sculptor Eduardo Chillida, it’s made from cement blocks and was completed in 1990. Locals have nicknamed this sculpture ‘King Kong’s Water Closet’ because ………… well it’s obvious really.

We then wandered back through the old town and just enjoyed the sunshine so much that we didn’t go inside any of the buildings.

We found the plaza mayor where there were a few photo opportunities.

We then found a very beautiful building known as the Palace of the Count of Revillagigedo, who was its last owner.

It was built from a medieval tower in the eighteenth century. In 1991, together with the annexed Collegiate Church of San Juan Bautista, it became an International Art Center.

Next to the Palace was a statue of a king – King Pelayo. King Pelayo was the first King of the Asturians who stopped the conquest of the Muslims and incited the Spanish Reconquista. He is a Spanish “Hero of Legend”. If it wasn’t for King Pelayo, and all his men, then Spain could still be an Arab country.

And then there was the cider tree. It was made with green glass cider bottles. We were amazed that there was no broken glass. All the bottles could just be picked up and removed, but none were.

We have noticed that there is a near complete lack of vandalism in Spain and Portugal, unlike in the UK. In the UK the bottles would have been pulled out and just thrown around and smashed by some little yobos or by drunks on a nighttime rampage.