Beautiful Barcelona, day one of four. 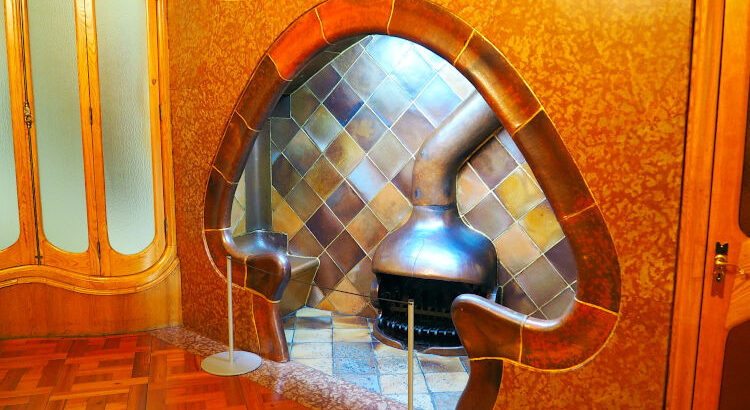 We spent four wonderful days being tourists of this most amazing city. Our prime plan was to go visit lots of buildings designed by the very famous architect Antoni Gaudi (our favorite I think) and also to see what else we could find.

From the train station, we made our way to Barcelona’s Cathedral and just outside was a lovely Christmas Market where we had the chance to purchase lots of different Christmas decorations. Our absolute favourites were the ‘shit logs’.

The Cathedral was constructed between the thirteenth and fifteenth centuries, with the principal work completed in the fourteenth century. It’s a stunner. Many people might go to the ‘new’ cathedral, the Sagrada Familia, but this one has a lot to offer too.

The Cathedral is dedicated to Eulalia of Barcelona, co-patron saint of Barcelona, a young virgin who, according to Catholic tradition, suffered martyrdom during Roman times in the city, for her beliefs. One story says that she was exposed naked in the public square and a miraculous snowfall in mid-spring covered her nudity. The enraged Romans put her into a barrel with knives stuck into it and rolled it down a street. Sounds like what the Romans liked to do!

In the Barcelona Cathedral, there is a separate inner courtyard, around the Cathedrals cloister where thirteen white geese live. Thirteen were chosen as that was the age of the young Christian saint Eulalia and the number of tortures that were carried out on her.

We then went to visit the Museum of the history Of Barcelona which cost us €7 each. The best part of the museum was below the streets and buildings of Barcelona. We walked along old Barcino (the Roman name for Barcelona) on a set of footbridges. It was really fascinating to see the remains of an old Roman bath and some dye-works, wander through a wine cellar and see an ancient fish processing site. All still there, now hidden under the modern city.

We then had a walk around the Gothic Quarter of Barcelona and walked under the very photogenic Ponte del Bisbe (Bishop’s Bridge).

We decided to have lunch in a lovely cake shop, and yes we definitely enjoyed one of their chocolate cakes each. They were delicious. This was one of the best cake shops we’ve ever been in. Extremely popular with a constant queue of people looking to satisfy their sweet tooth, and feast their eyes.

The Palau Guell is a mansion designed by Antoni Gaudi for the industrial tycoon Eusebi Guell and which was built between 1886 and 1888, with the final decoration being finished in 1989. It was built on a street that was the first in Barcelona to be built with pavements, a drainage system and two lanes of traffic. Posh!

Eusebi Guell paid 195,000 pesetas (€1,175) for a 589 square metre plot, which Gaudi made the very most of. In total, the building has 2,850 square metres over seven floors, and all rooms are based around the central hall.

The facade, which is 22 metres high and 23.60 metres wide, has three horizontal levels:
– The lower level, with two large catenary arches.
– The middle level, dominated by the large gallery.
– The upper, simpler level, crowned by a balustrade.

Eusebi Guell’s mansion had a dual function. On one hand, it was built to house his large family and, on the other, to host all of the events from his active social life. He, therefore, needed both public and private areas.

Guests entered the home in horse-drawn carriages through the front iron gates, which featured a parabolic arch and intricate patterns of forged ironwork resembling seaweed and in some parts a horsewhip. Animals could be taken down a ramp and kept in the livery stable in the basement where the servants resided, while the guests went up the stairs to the receiving room.

The Guell Palace is the only newly constructed building that Gaudi was able to finish completely and it has the honour of being the one that is best preserved because it never underwent any substantial modifications. Why should it? You don’t mess with perfection!

The materials that Gaudi used to build the Guell Palace were the best and they sure helped to make it a stunning home.

Every staircase that we went up and every room that we entered was absolutely beautiful.

The whole place particularly inside felt like a palace. Although the materials used throughout the building are quite traditional (stone, wood, ceramics, etc.), Gaudi’s use of them provides spectacular results.

The Guell Palace went through a series of difficulties after it was inherited by the widow and children of Count Guell.

In 1936, with the outbreak of the Civil War, the Mansion was seized and used as a police barracks with jails.

In 1944 it was about to be bought by an American millionaire, who was going to ship it home stone by stone. The family couldn’t afford to keep the home, but at the same time did not want it to suffer that fate!

Finally, the Guell family gave the building to the Barcelona Provincial Council in exchange for an annuity and on the condition that the building would be preserved and be given a cultural use.

In 1952 the Association of Friends of Gaudí installed itself there and from the end of the 1950s until 1996 it was home of the Theatre Institute.

In 1986 the Palau Guell was declared a Human Heritage by UNESCO. Since the UNESCO listing, the Guell Palace has had various restoration works carried out and in 2011 the building became a museum. Therefore, from 2011 everyone can now visit this jewel.

Entering the central hall is one of the most striking sensory experiences of the whole palace.

This space was conceived as a concert hall in which the organ plays the leading role and the dome acts as a great sounding box.

Upon the roof, the amazing tour continues with some lovely coloured chimneys.

There’s a total of 20 chimneys on the spacious roof clad with trencadis mosaic ie. made up of broken pieces of mosaic.

Another selfie and then it was time to move onto our next thing to see.

We decided to go and visit the Mercat de Sant Josep de la Boqueria, often simply referred to as La Boqueria, which is a large public market in the Ciudad Vieja district. It was a great place to wander around and soak up the atmosphere. This one is especially picturesque with the various merchants and vendors trying to outdo each other with their displays.

The place was full of fresh fruit, chocolates, spices, dried fruits and nuts, fish, meats and cheese and there were also some stalls where you could sit and eat some of those delicious foods and have a drink or two. Well worth a visit and a stop over for lunch.

Casa Batllo is a building in the centre of Barcelona that was designed by Antoni Gaudi from 1904 to 1906. It’s actually a remodelling project of a previously built house from 1877 and is considered one of his greatest masterpieces.

The house was bought by Josep Batllo in 1900. Josep wanted an architect that would design a house that was like no other and stood out as being audacious and creative. Both Josep and his wife were open to anything and they decided not to limit Gaudi. They chose the architect who had designed Park Guell because they wanted him to come up with a risky plan.

The building looks very remarkable — like everything Gaudi designed, only identifiable as Modernisme or Art Nouveau in the broadest sense.

The local name for the building is Casa dels Ossos (House of Bones), as it has a skeletal organic quality. The ground floor, in particular, is rather astonishing with tracery, irregular oval windows and flowing sculpted stonework.

It seems that the goal of the designer was to avoid straight lines completely. Much of the facade is decorated with a mosaic made of broken ceramic tiles (trencadis) that starts in shades of golden orange moving into greenish blues. The roof is arched and was likened to the back of a dragon or dinosaur. A common theory about the building is that the rounded feature to the left of centre, terminating at the top in a turret and cross, represents the lance of Saint George (Patron Saint of Catalonia), which has been plunged into the back of the dragon.

And then just inside there’s a set of stairs with more “bones” leading the way up to the next level.

This fireplace is a masterpiece. There surely can be no better anywhere in the world. With this one, you can actually sit inside, it’s simply stunning.

Lots of the rooms have lovely parquet flooring and between the rooms, there are these lovely doorways with smooth organic shapes and simple stained glass. It gives the impression of an undersea kingdom.

Within the building, there is this wonderful light well which brings natural light to the centre of Casa Batllo, and of course, it has been beautifully tiled. The tiles are darker blue at the top and gradually lighten in a soft ombre style as they near the bottom, to help bounce around the light.

Again like some of his other buildings even the attic space is dreamy. His signature parabolic arches are everywhere, not a straight line to be seen.

And then he has doors to die for. So many of the details of Gaudi’s buildings are truly wonderful. Every single little detail was considered and individually designed, right down to the fascinating door furniture. You can now buy replicas of door handles, window catches, drawer knobs etc for your own home. They just feel so wonderful in the hand.

The roof terrace is one of the most popular features of the entire house due to its famous dragon back design. Gaudi represents an animal’s spine by using tiles of different colours on one side. The roof is decorated with four chimney stacks, that are designed to prevent backdraughts

Here’s a close up of some of those roof tiles.

The roof terrace was the end of our tour. For how much of the building that you are allowed to tour this Casa Battlo experience was expensive. We paid €29 each but the place was amazing! We had such a good time that we spent another €58 on a very special Gaudi inspired ring for Deby as her Christmas and Birthday present.

That was the end of day one for us in Barcelona, however, we had three more fun-packed days to look forward to.