The Royal Fortress of Chinon in the Loire 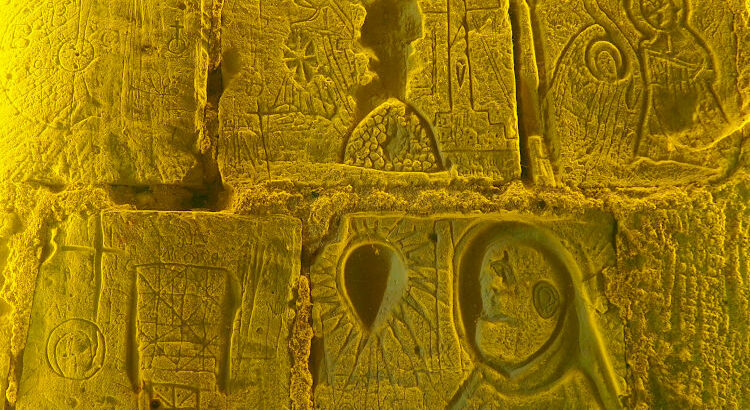 We went to the Royal fortress of Chinon because of the Knight’s Templar and Joan of Arc connections. Who wouldn’t want to go check out those connections!? What an incredibly historic place to visit, to actually literally walk in the footsteps of Joan of Arc and Jacques de Molay.

The Royal Fortress of Chinon sits on a rocky outcrop overlooking the town and the Vienne river. It’s been an important defensive location since Gallo-Roman times. You can tell this has been an important building just but this entrance gate to the perimeter!

This was the entry gate into the fortress. Think about all those famous kings and queens and other historical figures who passed through this gate. And now we get the chance to do the same. It always amazes us.

And from up the top, you could see how you could hurl rocks or boiling hot fat down onto people who weren’t invited!

And the views down onto the town and the river weren’t too bad either.

One of the great things about this fortress was that it has a very interesting ‘histopad’ presentation where you could hold up the tablet and panne it around the rooms and grounds, and it showed the rooms and layout of the castle as it was in days gone by. There were some really good videos and audio presentations of the history of the fortress.

And then there was this beautiful “house” (Logis Royaux) with one part missing which showed walls and floors missing and one large fireplace with a smaller one in the room below. However, the histopad showed us what the house would have looked like in its heyday.

It is in this very room (in 1429) that Joan of Arc met King Charles for the first time. She claimed to hear heavenly voices that said Charles would grant her an army to relieve the siege of Orléans. While staying as a guest at the castle, she stayed in the same tower where the Grand Master and Prefecture of the Knights Templar had been held back in 1308 for their interrogations.

In the area between the walls, they had built two modern versions of a medieval catapult trebuchet that was used in medieval times to hurl big projectiles at a fortress. It seemed like there were demonstrations of what it could do aiming at the flimsy wooden castle in the distance but unfortunately, there was no demonstration the day we were there.

From 1154 the Chinon Chateau started to look like a fortress. And the main residence of the fortress was none other than Henry II, the King of England who was also then Count of Anjou (Angevin King).

The fortress was home of the Plantagenet king and his wife Aliénor (Eleanor) d’Aquitaine until 1189 when the king died grieving over the betrayal of his son Richard (Lionheart).

In 1205, after an eight-month siege, Philip-Auguste conquered Chinon and the province of Anjou was annexed to France. It continued to serve as a royal residence throughout the following centuries.

This room had loads of lovely expensive plates and ornaments and the tapestry was so so colourful. The blues and the reds really jumped out, whereas normally the whole thing is so faded everything is a beigey brown.

Here’s Deb admiring a French Knights outfit. Those medieval French knights were pretty short but they had long spikey sticks!

This was the building that we were really interested in as it has strong links to the Knights Templar. This is the famous Tour du Coudray . It was here that Jacques de Molay, Grand Master of the order was imprisoned in 1308 to 1312 along with four top members of the Knights Templar prefecture, before being put to death (burnt at the stake) in Paris by order of the Vatican.

The Pope sent three cardinals to Chinon to interrogate the Knights Templar members. A parchment confessing their sins and those of the order, and asking for repentance was written at the fortress, and is today conserved in the Vatican archives.

Details of the Grand Masters trial and imprisonment was uncovered with the discovery of what is now known as ‘Chinon parchment’ in the Vatican archives.

According to the document, all interrogations of the accused, spanning August 17 to 20, 1308, were always in the presence of the notaries public and the gathered witnesses. Among the accusations were sodomy, denouncing God, illicit kisses, spitting on the cross, and worshipping an idol.

When we went into the rooms where the Knight’s Templars were imprisoned we found this. It’s some of their graffiti that they scraped into the soft walls during their imprisonment before they were sentenced and executed. This is behind a piece of perspex and a weird yellow coloured light.

Incredible to see real history from such important figures. Perhaps these scratches in the wall are a clue or a map to the missing Templar treasure 😉

The most famous event at the chateau took place in 1429 during the Hundred Years’ War when Joan of Arc met with the French king Charles VII. He was taking refuge in Chinon fortress from the Burgundians and the English. Joan eventually persuaded Charles to stand up against the English and reclaim his throne. He gave her authority to raise an army and to change the fortunes of the French. Unfortunately, this all led to her tragic destiny.

The Chinon fortress was one of the most interesting places we had visited on our trip so far. Happy days!