The oldest cloister in the world at Moissac 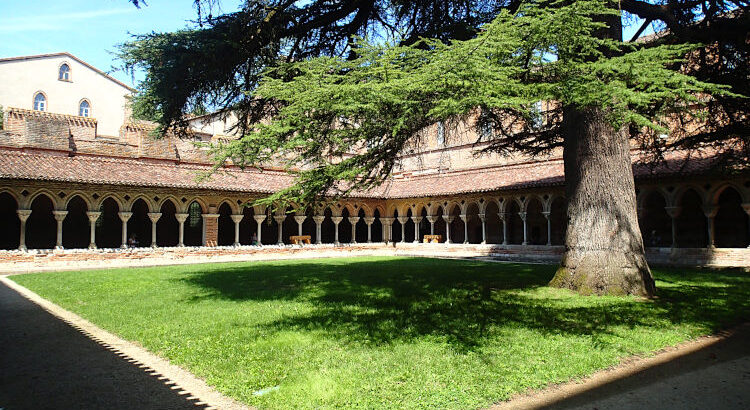 Moissac is an unremarkable small town bordering the Tarn river in the Occitanie region of Southern France. It has a single claim to fame that makes it worthwhile to travel out of your way to visit.

It was heavily damaged in March 1930 by flooding of the Tarn, which devastated much of southwestern France. It was counted as a 100-year flood. One hundred twenty people were reported to have died in the city at the time, and it lingers heavily on the town’s history. Maps show the extent of the flooding and road names were changed to reflect and remember the event.

Thankfully the Abbey and Cloister were not damaged, which is the main reason we came to visit. The abbey from the outside is unassuming and not very interesting, but very very old. The current cathedral building dates back to 1100 and earlier!

According to legend, Moissac Abbey was founded by the Frankish king Clovis the day after a victory over the Visigoths in 506. The legend states that Clovis had made a vow to erect a monastery for 1,000 monks (in memory of a thousand of his warriors who died in battle) if he triumphed over the Visigoths who had ruled the area for the past century. He threw his javelin from the top of the hill to mark the spot where the “abbey of a thousand monks” was to be built. Unfortunately, the javelin landed in the middle of a swamp.

However, despite this local legend, historical records indicate that it was actually founded by Saint Didier, Bishop of Cahors in the middle of the 7th century. Still a very long time ago.

The establishment of the monastery was difficult because of raids by Moors from the south and west and the Norsemen from the north. The abbey was sacked by the Arabs twice around 732 and was looted in the 9th century by Norman pirates and in the 10th century by  Hungarians.

Inside, the entire church is decoratively painted. The interior painting was redone in 1960 to replace the original that had decayed over the long years, in the same style as the original.

The most imposing part is the porch and entrance to the church and it’s here that some of the fascinating histories can be found.

The tympanum (the semi-circular decorative wall surface over the door) depicts St.John’s vision of the Apocalypse. There are magnificent intricate carvings portraying Christ and the Elders of the Apocalypse. The Christ in majesty in the centre surrounded by the 4 Evangelists and the 24 Elders looking all towards him, as a symbol of unity.

In both inner sides of the porch, the Last Judgement is represented with the separation of Good and Evil. Some of the seven deadly sins were carved for Evil and the Annunciation and Visitation of Mary or the Flight into Egypt for Good.

Also in the cloister, very sadly almost all of the faces been removed. This is the oldest cloister in the WORLD and some say the most beautiful. Its beauty and importance aren’t immediately obvious as you step inside and at €13 each to get in, we actually both felt quite deflated. It was a lot of money just to see the cloister – the entrance to the cathedral is free.

Old pictures suggest that the garden was once an ornate tropical garden, although it is now simply laid to grass.

However, your mood is lifted when you examine the exquisite detailing on the carving of the 76 completely different capitals. It truly must have been a labor of love to create these carvings depicting scenes from the bible and the life of saints.

There are a total of 76 pillars at the Moissac Cloister. Each of them is different and tells a story on four different sides. You are given a leaflet which number each of the pillars and explains what you are seeing.

They are dramatically shaped like upside-down pyramids, with plain slender columns below, some with a single column, some with two side by side.

Many of them have Latin inscriptions explaining the scene.

Subjects of the sculptures include delicate foliage, animal and human figures, biblical scenes and legends of the saints, all combined in what appears to be a random order.

In addition, there are 14 larger panels of the saints, almost life size.

And in these, the faces have remained.

One small face was recovered in 1986 but they couldn’t work out which capital it originally came from.

The remarkable cloisters and the roman style entrance later acted as a model for hundreds of churches elsewhere.

In the 19th century, a railway line was run through the town, right through the refectory of the abbey, just off the cloister, causing it to be demolished. What on earth were they thinking? While we were there a train passed right by sounding its horn and breaking the silence of the cloister. Thankfully the cloister wasn’t demolished for the train station and is now a UNESCO site, along with the entrance porch to the Abbey.

One other really beautiful part of Moissac is the canals that go along the edge of the town.

Those old canals had lots of boats and barges on and it all sure looked better than the train station!

We actually parked for once just next to the road, alongside the pretty river Tarn, however, the road had very little passing traffic so we had a good nights sleep.

The most noise we heard was from the automatic sprinklers that watered the peach trees over the road. There was an abundant supply of free water from the river so the sprinklers were pretty non-stop.

There were a few other motorhomes parked alongside the river, enjoying sitting at the picnic tables in the evening, all there to visit the cloister and cathedral. In the picture above that’s the Pont Napoléon.

It was on the river’s edge, in a shaded quiet area with a grassy area with benches. It was totally gorgeous to sit there in the evening next to the water. There were no services, but the official town aire (paid) was just a few yards down the road if you needed to stop for services.