Cordes-sur-Ciel, the village above the clouds 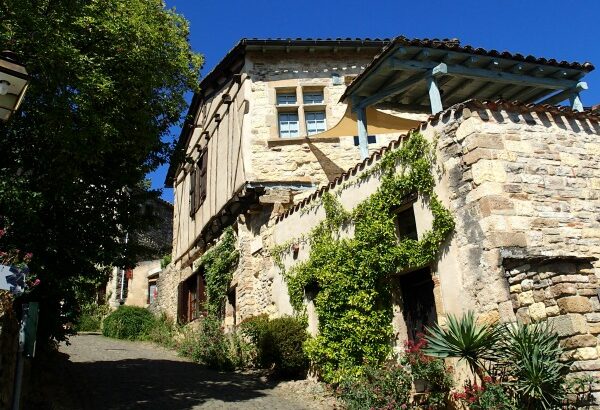 In 1222, Cordes received its charter from the Count of Toulouse to become a “bastide” – a fortified new town. The entire town was built from scratch on top of the hill and has remained quite untouched by progress and expansion so retains its original layout, buildings and charm.

Cordes is generally considered to be the first of the bastides in the Southwest of France. Today it opens its gates to flocks of tourists but compared to some places we had visited, it wasn’t overrun, there was plenty of space for us all and lots of quiet corners and streets where you can still find yourself utterly alone and transported back in time to days gone by.

The steep climb up through the village may have something to do with that. On a hot day, many people were making very slow progress up the steep cobbled streets.

Cordes was built between 1222 and 1229 to resettle and shelter people who had been displaced by the Albigensian Crusade. They were also intended to colonize southwest France and encourage agricultural and related market development. Though not always fortified, bastides were often built in defensible locations. Cordes is right at the top of a very steep hill and commands views all across the surrounding countryside.

The Duke of Toulouse was obviously very wealthy and the town wasn’t just built to house the farmers and their workers, because many of the houses in the top of the town are very grand indeed, with impressive gothic stonework and arched windows.

Within the space of 30 years, the town was so successful that they had to expand the wall 5 times! By 1250 it was the richest town in the south-west of France besides Toulouse.

Cordes was partly fortified, and so well built and designed around a quite steep hill. It was built in a spiral of concentric circles of houses, with steps up between the houses to the road and houses above. The elevation of the hill is between 500ft to 1000ft.

There is a central large covered marketplace, which now has a couple of outdoor restaurants next to it. We had a very nice lunch there and a glass of the local wine. The well in the marketplace is 970 ft deep (we think) and was built to ensure that the village always had access to freshwater in the event of further troubles in the area.

Why is Cordes named Cordes? Because of its links with Cordoba in Spain which was the capital of textiles and leatherwork.

The village was originally just called Cordes, a word thought to come from “corte” meaning “rocky heights”. Then in 1993, its name was changed to Cordes-sur-Ciel – Cordes (Rocky Heights) in the Sky. This name was meant to reflect the seasonal phenomenon in which the spring and autumn fog gathers around the foot of the village, making the village appear as if it is floating among the clouds.

Now the whole village is full of arts and crafts from leatherworking, painting, jewellery, soapmaking, boutique clothing, photography, art galleries, and there is even a Harry Potter shop! In 2014 Cordes-sur-Ciel was voted the best village in France.

We stayed at the official village aire, at the base of the village. It was €7 per night to park, but services were extra. €1 would get you 60 litres of water or 3 hours of electricity.

It was pretty much a gravel car park but we got one of the better places overlooking a small grassy area. The map below shows exactly where we parked our motorhome at 44.064237, 1.958409.

Cordes Sur Ciel is certainly worth a visit to enjoy lunch in the covered market square and enjoy visiting all of the arts and crafts shops. The motorhome park is affordable and convenient, and there is a good market at the lower part of town on the main road selling good local produce.