Cahors and its beautiful medieval bridge 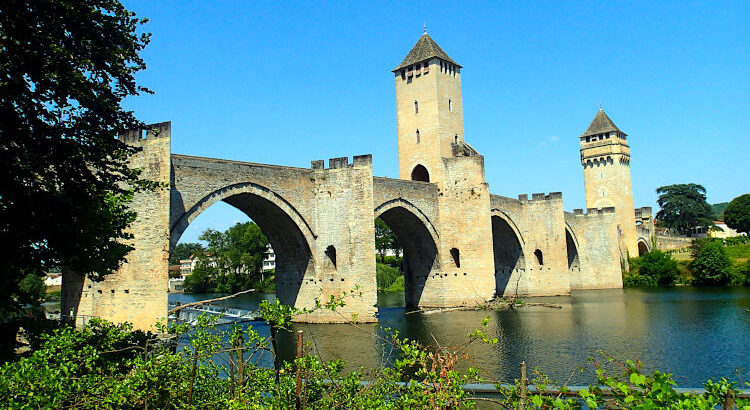 When we went to Cahors it was mainly to see its magnificent medieval bridge and we also popped in to see its lovely Cathedral. The bridge appears in all of the literature and information about the town and it’s such a striking example, still with its original defensive towers remaining.

Cahors is a town on a U-Shape bend of the Lot river in the Occitanie region of southern France. It’s known for its deep red wine (black wine), elaborate municipal gardens and the Pont Valentré, a medieval bridge with 3 towers.

The symbol of the city, the Valentré bridge was built in the 14th century and is a UNESCO World Heritage Site. It’s described as the finest medieval fortified bridge in the whole of France. It certainly is magnificent, and completely free to visit and walk across.

This magnificent fortified structure is the only bridge in the world to have three towers! And the towers on each end of the bridge are machicolated towers. What’s that we hear you ask…

A machicolation is a floor opening between the supporting corbels of a battlement, through which stones or other material, such as boiling water or boiling cooking oil, could be dropped on attackers at the base of a defensive wall.

Each of the towers had defences including gates and then at each end, there was a defendable gate. We walked through this gate to get to the lively old town of Cahors and to go and see the Cathedral.

The Saint-Etienne cathedral has two domes but unfortunately, we didn’t get any good photos from the outside. Sometimes it is difficult to photograph old Cathedrals or Churches because in medieval times when these things were built the Cathedral was the centre of town. And then lots of important buildings were built around them not thinking that in the future we would come along wanting to take an awesome photo.

The cathedral was built by bishop Gerard de Cardaillac in the 11th century, and it was consecrated by Pope Calixtus II on September 10, 1119, and completed around 1135. It’s a magnificent fortified building because in fact at the time, the local bishops were in fact also powerful feudal lords in their role as counts and barons of Cahors.

Kept in a special place in the Cathedral is the precious relic of the holy ‘cap’, which was supposedly worn by Jesus. It was brought back to Cahors by bishop Gerard de Cardillac after his trip to the Holy Land in 1113. I wonder how much Jesus’s holy cap must have cost him? Or was he given it as a present? I bet he had to pay!

Makes you laugh now doesn’t it to think of those religious travellers looking for ‘relics’ and buying knocked off stuff made especially for these gullible tourists, even in those days. These ‘relics’ were then carefully saved and worshipped for 1000 years. Who knows what this holy cap actually is – somebody’s grandmother’s medieval shower cap?

We finally moved into the cloister area which was built in 1504 by bishop Anthony of Luzech. It was nice but we didn’t spend much time there as we had only recently seen the best cloisters in the world at Moissac.

A very interesting fact about Cahors, from many years ago, was that is was one of France’s earliest banking centres. And what do they do at banks besides holding your money? They lend out money and charge interest. So Cahors was actually synonymous with the sin of usury. Usury is the practice of making unethical or immoral monetary loans that unfairly enrich the lender. The term may be used in a moral sense—condemning, taking advantage of others’ misfortunes—or in a legal sense, where an interest rate is charged in excess of the maximum rate that is allowed by law.

Cahors was so famous for the sin of usury that it got a reference in Dante’s Inferno. The usurer’s of Cahor were mentioned in the explanation of sins punished in the seventh circle of hell along with blasphemers:

And for this reason, doth the smallest round
Seal with its signet Sodom and Cahors
And who, disdaining God, speaks from the heart

The phrase “he is from Cahors” was intended to be derogatory and meant that a person was a usurer. We had no need to borrow any money in Cahors, Nige had loads of cash in his wallet!

We parked in a free car park that had a motorhome area at one end, which you can see in the picture above (a black arrow marks the spot bottom right). It was a little out of town but it didn’t take us long to walk to the Pont Valentré, which was a lovely walk anyway along the river. The coordinates of the entry to the car park are 44.438739 and 1.441009. You can find all of our trip parking spots marked on our maps page.