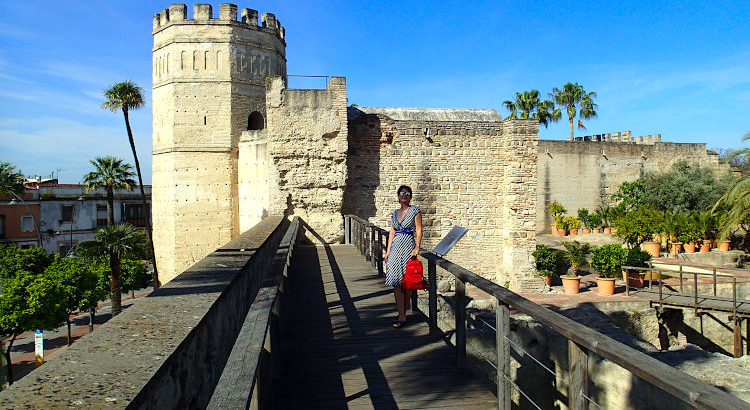 The visit to the Alcazar of Jerez de la Frontera was definitely the highlight of our trip to Jerez, that didn’t involve more alcohol (Sherry). Read about the Fundador Sherry tour and getting tipsy here.

It’s a former Moorish Alcazar (castle or fortress) which in 1931 was deemed a Spanish Property of Cultural Interest. It is believed that the first fortress was probably built in the 11th century, over the top of a site settled since prehistoric times. Then in the 12th century, a new structure was erected to be used as both residence and fortress.

Later, after the Jerez was reconquered in 1261 by the Christians it became the seat of the first Christian mayors of the city. So that is the history out of the way. Now, what did we see?

From the outside, it definitely looks like a castle. There are huge thick walls on four sides with large gates and a large tower, like a keep, in one corner and an octagonal tower in another corner.

The walls are in excellent shape and we got to climb about all over the walls, ramparts and steps, which gave us an excellent opportunity to take photos of the inner Alcazar.

In the one corner was the Tower of Ponce de Leon, which was annexed to the keep. For whatever reason, we were not able to view this mighty tower. It appeared to be permanently closed. Perhaps it’s not in a state of good repair on the inside.

We were, however, able to go up into the other tower which was a beautiful octagonal tower, in the Almohad style. This tower gave us excellent views of the surrounding city.

We got to see the really beautiful private mosque that served the original royal rooms of the Alcazar. This was very important as it is the only remaining mosque of the eighteen once present in the city, destroyed once the city was taken over by the Christians from the Moors. Later, it was turned into a church dedicated to the Virgin Mary, while the minaret was turned into a bell tower. There is a small altar inside but you can still admire the original Moorish architecture and layout.

In the middle of the open area within the Alcazar is the Palace of the Patio de Doña Blanca, dating to the 12th-century. It’s an Islamic structure which was originally a leisure pavilion, which has subsequently been much updated on the outside and now looks much later in style. Today the Palace is disappointing. It could be so much more. It didn’t really have much open at all and what was open was just a few huge empty rooms decorated in a French palace style and not at all inkeeping with the Moorish architecture of the Alcazar.

In one large room, there was a very strange old pharmacy of all things which from the photos on the wall seemed to have been a pharmacy for many years. It still contained medical instruments, and lots of jars and bottles for the medicines and potions. It seemed very out of place.

Then there were the baths. They were really nice baths and in the exact same style as the ones in Ronda. It was if they had been built by the same person at the same time as Ronda, although these weren’t so large or in such good repair. First of all, you walked into the entrance area which was mainly there for undressing, socialising and relaxing. This then led onto the cold room and then onto the tepid room. The tepid room was the largest in the complex.

The final room was the hot room and here you could still see part of the heating system. It would have been like a steam room rather than a hot bath, because the furnace was underneath the tiled floor which got very hot. Water was thrown onto the hot tiles to make steam. They must have needed shoes!

The very large area in the middle of the complex has varied over the years since it stopped being a fortress. At one point it was used as an olive grove and the oil was pressed in the compound.

One of the most fascinating parts of the complex was an area that was used in more recent times for pressing olive oil. The press itself was gigantic and must have weighed tonnes. Our only regret when visiting the press was not getting one of us into one of the photos so that you could see how enormous the press really was.

Ground olives (from the mill in the next room) were pressed here under the enormous weight of the press until the oil was released and drained down the channel into a huge cistern underneath the floor at the far end.

Finally, there was also a very lovely cistern (wish we had taken photos) which was in the corner where the octagonal tower was. From the patio above you could see the curves of the vaulted ceiling, so it was clear there was something below. And below was a huge cistern for collecting and storing rainwater that would have been used for drinking, washing etc and would have been very important if the city was ever under siege.

If you go to Jerez and fancy some culture and history with your Sherry wine, then a visit to the Alcazar is well worth it. But it is nothing like the Alhambra! We visited Jerez on the 1st May, which is labour day. With it being a public holiday the town was really quiet.