Getting tipsy at the Fundador Sherry Tour in Jerez 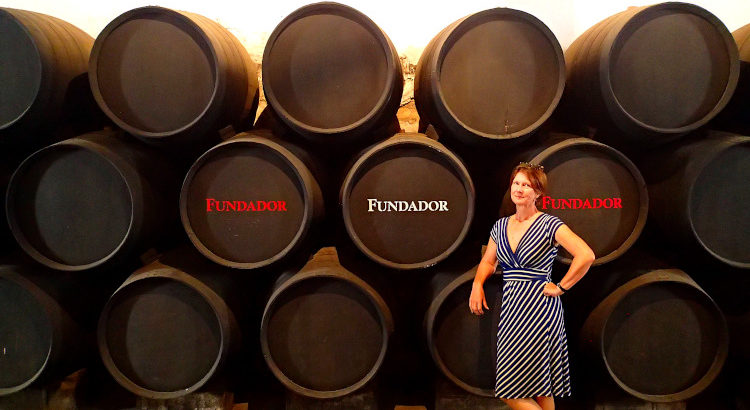 You’ve probably heard of people visiting vineyards and wine regions and taking tours of the winery, doing wine tasting and buying wine direct from the barrel. Did you know that you can also take similar tours for sherry and brandy? Sign us up!

Jerez is the sherry capital of Spain. The area has several sherry and brandy makers, and is surrounded by huge fields of vines just waiting to burst into fruit for the sherry production. We decided on the tour with Fundador, the oldest and largest sherry and brandy producer in the area.

The Fundador Sherry production began right on this very site in 1730. As part of the visit we walked through the first and original cellar where the sherry was aged (El Molino Winery) and were able to see some of the very earliest barrels. But we are getting ahead of ourselves, let’s start where we started the tour – in the HUGE cellar known as La Mezquita, or The Mosque.

It’s known as the Mosque because of the shape of the columns and the style of architecture – it’s also an almost religious experience to open the huge doors and step inside this monument to alcohol. The smell is intense. The firsts few breaths you take leave you a little giddy and light headed. 1-3% of the sherry evaporates per year and it’s fragrance in the air of the cellar is so thick you can taste it. The whole group was immediately gasping, oohing and giggling at the intensity of the sherry in the air. It was delicious.

One of the largest wine cellars in the world, it holds 40,000 barrels in this warehouse alone, each containing 500 litres of sherry. It measures 25,000 square metres and was completed in 1974. The climate stays pretty stable throughout the year due to the high ceilings, and measures between 12 and 24 degrees. It’s kept humid in summer by spraying the stone floors.

The barrels are made of white American oak but are painted a matte black so that they show up any leaks better. Once set, the barrels are never moved. The sherry is moved within the barrels from the upper to the lower levels as it matures, and then eventually to the bottles. Sherry is removed a third of the barrel at a time with a minimum of 3 years of aging.

There really are barrels of sherry as far as you can see. The sherry production process was explained, how it varied from wine, and how the different types of sherry were produced. We learned how the fino sherry, the driest, was kept pale and dry by adding a yeast to eat off the sugars and block off the oxygen from reaching the sherry in the barrel. It really was fascinating to see.

We visited another of the cellars and learned more about the process, the aging, the grapes and soil of the vineyards, and the blending of the sherries to make the various types. We were fascinated to learn the history of Harvey’s Bristol Cream. Coming from Bristol, it was always our understanding that this famous sherry was ‘made’ in the city, but it turns out that it has always been produced in Jerez since it started and was simply imported into the UK via the port in Bristol where it got it’s name, and then blended and bottled in Bristol in the famous Bristol Blue glass bottles. (History of Harvey’s Sherry in Bristol.)

It was interesting to learn the story (true or not, no one knows for sure) about how Brandy was first made by Fundador in Jerez by accident. Legend has it that the Dutch ordered 500 barrels of sherry which were put aside ready for transport. Payment failed at the last minute and the barrels sat neglected and forgotten for some time, until years later when they were opened to see if they had spoiled and it was discovered that they had matured and evaporated into the first barrels of Brandy. One of these first barrels from 1874 can still be seen at the cellar today.

Each of the three cellars we visited had a different smell. The last one, the oldest and original cellar on the complex, had the richest and deepest fragrance. Barrels of sherry and brandy had been maturing in this warehouse since 1730 and you could just feel it in the air.

This cellar includes some of their most valuable barrels, the oldest and finest sherries and brandies, a barrel of the original brandy from 1874 and many barrels signed by celebrities, politicians, important historical visitors like Picasso, and even royalty. There was one signed by our own Princess Anne.

Finally, there was the sherry and brandy museum which included photos, images, ledgers, grape presses, stills, bottling equipment, carriages, old bottles and labels and such a lot of really interesting wine and sherry history. We were really interested to see a ledger from Harveys in Bristol from 1961 showing orders for sherry from people in the Bristol area.

Next of course came the highlight of the tour – the tasting! The first was a fino sherry, the driest variety and OMG, it was dry. Not my kind of thing at all, I’m much more of a dessert wine kinda girl. Next, the Harveys Bristol Cream served over ice with a slice of orange, and wow, what a great combo. The sherry and orange went beautifully together. The final tasting was an
18 yr old brandy. I’m not a spirits drinker at all, but the brandy was smoother than I expected and didn’t make me cringe too badly.

I admit to being a little bit tipsy and giggly after the tasting. I usually don’t drink at all so it was a bit of an experience for me! We had decided not to drive in to town on the scooter today, and had taken the bus instead just in case. It was very handy as I was a little unsteady on my feet…

We very much recommend the tour at Fundador. The lady was enthusiastic, knowledgeable and patient with all the questions. It was 90 minutes plus the tasting for €12 each. The midday tour is the best one because it includes the visit to the huge wine cellar which is only available once a day.