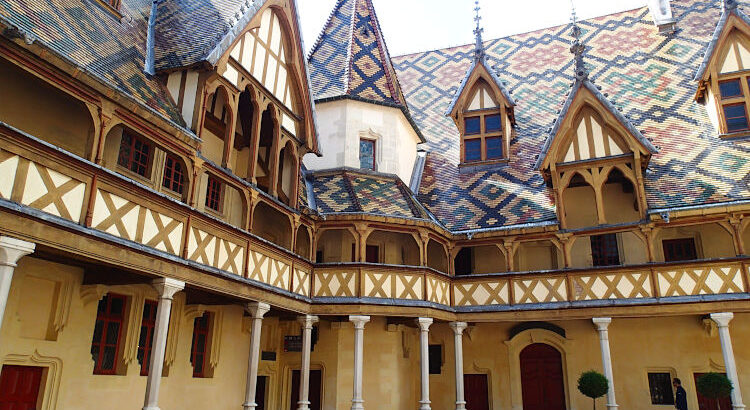 As sometimes happened on our trip so far we arrived in Beaune and parked up without really knowing what we were going to see. It had been added to “the list of things we should visit in our motorhome” on our map without any notes and so we arrived without any expectations, except that it was probably a medieval village.

We started off with a trip to the tourist information and picked up a map and a guide to the town which we poured over as we ate some very delicious sandwiches in a cafe on the square.

This area is the capital of the Burgundy wine-growing region and there were fields of vines and very fine looking vineyards all the way along the road as we drove into the town. It’s a very popular area for walking, hiking and cycling through the vineyards and the surrounding countryside. That wasn’t on our agenda for today but there are good maps available and the walks and cycling routes through the vineyards do look lovely.

We started off with a quick visit to Beaune’s Cathedral – Basilique Notre-Dame de Beaune. Doesn’t that look beautiful? Strange though that it doesn’t have a tall spire or bell tower so its overall profile seems different to many cathedrals we’ve visited.

Also known as the “Daughter of Cluny”, the Notre Dame Collegiate Church represents a beautiful example of Burgundian Romanesque architecture.

Over the centuries gothic elements were added as well as a 16th-century bell-tower and chapel. A pleasant and cool distraction but not really holding much of interest.

It was then time to visit the place that all the hype was about in Beaune, being described as one of France’s most prestigious historic monuments.
Behind the austere slate roofs of the facade and through this pretty doorway (note the date of 1443) we found an incredible courtyard and buildings with stunningly beautiful coloured varnished tile roofs.

The rectangular courtyard is the best location to admire the different buildings, three of which are decorated with a glazed tile roof. These colourful glazed tiles quickly became a trademark of the architecture of Burgundy. There are lots of other glazed-tile roofs in Dijon. Four different colours of tiles, (red, brown, yellow and green) are used to form beautiful interlaced designs. The current tiles are replicas dating from between 1902 and 1907. I don’t suppose we can expect the originals to have lasted in good condition since 1443.

The Hospices de Beaune or Hotel-Dieu de Beaune is a former charitable almshouse. An almshouse is charitable housing provided to people in a particular community.

It was founded in 1443, which is an incredible number of years ago, as a hospital for the poor by Nicholas Rolin. The Duchy of Burgundy, which Beaune was part of, was at that time ruled by Duke Philip The Good and Nicholas Rolin had been appointed his Chancellor of Burgundy. The original hospital building, the Hotel-Dieu, one of the finest examples of fifteenth-century Burgundian architecture, is now a museum.

The Hundred Years War had recently been brought to a close in 1435. However, massacres continued with marauding bands still roaming the countryside, pillaging and destroying, provoking misery and famine. The area had also recently suffered an outbreak of the plague. The majority of the people of Beaune were not surprisingly declared destitute.

Nicholas Rolin and his wife Guigone de Salins responded by building a hospital and refuge for the poor. Having gained permission from Pope Eugene IV in 1441 the hospice was built and consecrated on 31 December 1452. In conjunction, Rolin established the “Les sœurs hospitalieres de Beaune” religious order.

The Hospices de Beaune received its first patient on the 1st of January 1452. Elderly, disabled and sick people, with orphans, women about to give birth and the destitute have all been uninterruptedly welcomed for treatment and refuge for over 500 years. This Catholic institution focused on healing both the body and the spirit of its patients.

In 1457 a parcel of land containing vineyards was gifted to the Hospices de Beaune by Guillemette Levernier. This wine estate grew as the years went by and the wine was sold off to raise funds for hospital equipment and maintenance of the Hotel-Dieu.

Over the centuries, the hospital radiated outwards, grouping with similar establishments in the surrounding villages of Pommard, Nolay and Meursault. Many donations – farms, property, woods, works of art and of course vineyards – were made to it, by grateful families and generous benefactors. The institution is one of the best and oldest examples of historical, philanthropic, and wine-producing heritage, and has become linked with the economic and cultural life of Burgundy.

Amazingly, this charitable institution cared for the sick on-site for over half a millennium, from 1452 continuing as a working hospital right up until the 1970s! The building is incredibly well preserved – the Grand Salle (or the Room of the Poor) still has its original wooden beds. On the ceiling, the exposed painted frame is in an upside-down boat-skiff shape and in each beam are sculpted caricatures of important inhabitants of Beaune. And yes at the end of the huge room that is a Chapel so the sick could be close to God.

The Room Of The Poor has two rows of curtained hospital beds, one on each side, and doesn’t that red fabric just shine?

The central area between the two rows of beds which is empty now, allowing tourists a good view of the room and beds, would have originally been set up with benches and tables for meals.

When the poor people of the area who were ill came to this hospital they must have been absolutely amazed at what was provided for free.

There was a corridor area behind each of the rows of beds allowing the nurses to store things and to keep everything neat and tidy and clean.

At one end of the large ward of hospital beds is the Chapel, whose location was chosen to allow the bedridden to attend Mass from their beds. The chapel was the original location of the incredible Roger van der Weyden altarpiece, that we’ll see later in the tour, taken from the original location to preserve its magnificence.

Over time the “hospital” received such recognition that rich people wanted to attend to receive good medical care, as they also got ill now and again like they do today.

The rich people who paid for their stay were put in St Hugh’s Hall. This room was much smaller and more private and its walls were cram-packed with beautiful mural paintings and again there was a small chapel and altar area where everyone could give thanks.

Some of the large donations were received from rich families from the area whose family member had been cured or who had had a very nice stay in very comfortable surroundings before they passed away.

We also got to see in the kitchen with its beautiful Gothic fireplace with two hearths where the meals were prepared for all the patients and everyone else who worked and lived at this incredible establishment.

The fireplace even had its own automated to keep everything moving on top of the fire. The height of sophistication and technology for its day.

And this was The Laboratory where medicines and concoctions were brewed up, some of which no doubt would give us pause today!

While the apothecary with its mortar and 130 earthenware pots from the 18th Century was the preserve of the sister pharmacist.

The tour ends in the last part of the building with some incredible works of art and a superb collection of old tapestries from Tournai, Brussels and Aubusson.

But the highlight of our visit as far as pieces of art were concerned was the Polyptych of the Last Judgement by Rogier van der Weyden. It’s a unique and world-famous masterpiece, found in the final room of the tour.

It was painted in the 15th century and just look at those incredible colours. Not surprisingly the altarpiece had been moved from the chapel into a darkened and climate-controlled room, where the sun etc could no longer damage it.

Rogier Van der Weyden is regarded as one of the great masters of Flemish painting. Anyone gazing upon this monumental piece of art could have a religious experience whether they believed or not.

Of the over 5,000 objects that can be viewed at this incredible museum this altarpiece clearly stands out as the number one piece.

As far as modern times go and the grapes are concerned today the estate comprises around 61 hectares (150 acres) of donated land and still produces Grand and Premier cru Pinot Noir and Chardonnay. A charity wine auction at the Hospices de Beaune takes place on the third Sunday in November every year (since 1859!) during the three-day Burgundian food and wine festival, Les Trois Glorieuses. It is one of the top events of the social calendar.

Entry was €8.50 per person including an audio guide and the whole place was fascinating. This is what the Church could do to help the masses today, not just take their money and build yet more churches and chapels. This is an enduring charitable institution that has left its mark on the people of Beaune for many generations.

It was then time for us to walk around the Beaune ramparts which were pleasant but not especially exciting. The ramparts and moat form an almost complete 2km-long circular path around the old town and are dotted with eight bastions of different shapes and a few towers. We didn’t take any photos of the ramparts, just this amazing tree on top, which seemed very healthy even though there was space for more than one of us inside.

We also found this old fortified gate (which used to have a drawbridge), known as the Porte du Bourgneuf, which witnessed the entry of many important personalities over the centuries.

To visit Beaune we parked at its official aire just on the outskirts of town. The first 4 hours of parking is free, then you pay €5.90 for the next 20 hours.
Services were available at €4.20 for 4 hours of electricity and a further €4.20 to fill with water and clean the toilet. It was a 15-minute walk to all the attractions.

We drove to Beaune in the morning to visit the town having actually stayed for free a little way away to the North-East, near a village called Gigny. The red arrow showed where we parked.

We parked up just off a small track in a lovely green area.

We had a nice view out of our windscreen over a big shallow lake, which seemed popular with the locals for fishing and walking their dogs.