Annecy, the Venice of the Alps 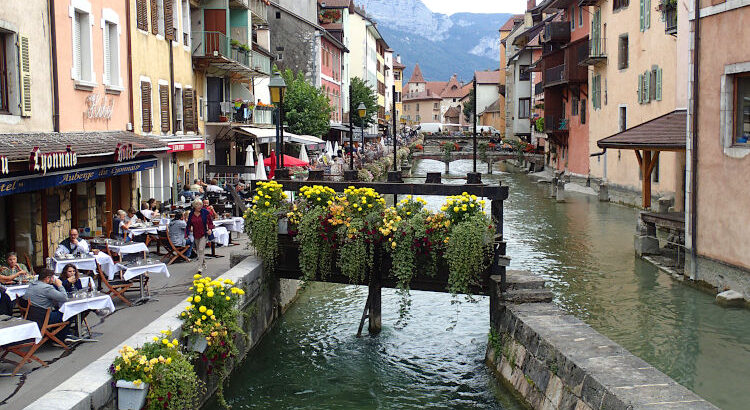 However, motorhome parking is very lacking in this area so the best we could do was to park on the side of the main road, on a road recommended on the site Park4Nite. It was a very wide road and there were wide parking bays marked out so it was fine, and actually the traffic wasn’t too busy.

Annecy is not a motorhome friendly town, however, with the parking all having the 2m barrier across so it’s cars only. Being motorhomers we know what some other motorhomers can be like, so we are not at all surprised some of these places don’t want them, but they are losing out on a lot of tourist money, especially out of season, by not providing anywhere for motorhomers to park up.

The walk around the lake is quite beautiful with the gardens and promenade all so beautifully laid out and with such nicely planted gardens. We came across these brightly coloured and very large inflatable balls which seem to be anchored in place on the lake so can only assume that they are some kind of modern art. We enjoyed them as they were different and really added some beautiful colours to the lake, especially today as it was grey and overcast so there wasn’t much colour.

The water was so very clear again and it definitely had the magical slightly milky blue colour of glacier water. There were hundreds of boats of all kinds available for rent, but very few takers today, probably because it was a little bit chilly and overcast.

We took a walk along the lakefront towards the castle and the old town. Annecy is the Venice of the Alps they say because of all the canals, and it certainly was picturesque and perhaps more like Venice than our trip to Aveiro was in Portugal.

We crossed the quaint lover’s bridge, walked through the park with its very old trees and then up the main canal. There are very narrow and winding paths alongside the canal lined with cafes and restaurants – and they were all packed.

It was a gorgeous day for eating out but it seemed so strange to be sitting there with a steady stream of people, shoppers and tourists passing by all ready to nudge your elbow just as you lift your fork to eat. Or cause you to pour wine all down yourself as that elbow gets you in the side of the head. (Victor Meldrew Nigel?)

We chose instead to cut in and walk one street back from the canal and found a lovely pick and mix cafe where you could pick a sandwich or main course, a dessert and a drink all for a set price. Sorry, we hate spending money on overpriced frivolous bollox. (Nigel, that’s called eating out and most people enjoy it. You can see what I’m dealing with here everyone. Getting this man to spend money on anything is a challenge. Except sunglasses, he has more sunglasses than I have underwear.)

The main shopping area of Annecy is delightful. The original layout and medieval buildings are all still exactly as they were hundreds of years ago, and the narrow cobbled streets are lined with tall and impressive old buildings of several stories, with houses above, and then an arched gallery running the length of the street below with assorted shop fronts and cafes. It’s all pedestrianised again so it’s easy to just wander through at your own pace and check out all the shops. We didn’t take any photos. (Is that because shops are filled with overpriced frivolous bollox Nigel?)

As well as the usual high street shops you might expect there were dozens of shops selling ice cream. It seemed incredibly popular to eat ice cream in Annecy and they all claimed their ice cream made on the premises was the absolute best in Annecy. Yeah alright then! (I’m sure I don’t need to mention that we didn’t buy any ice creams because they were deemed to be overpriced.)

We finished our visit to Annecy with a short climb up to the castle on top of the hill. The castle was built between the 12th and 16th centuries. It served as the residence of the Counts of Geneva and the Dukes of Genevois-Nemours.

Several times the castle was the victim of fires and it was abandoned in the 17th century. At one stage it actually became a huge squat for hundreds and hundreds of the poorer people of Annecy. Later it was repaired and serves as a barracks right up until 1947. The town of Annecy bought the castle in 1953 and restored it with the help of Monuments Historiques.

The castle these days is open to the public, but as the town museum rather than as a castle visit. You still get to see the fantastic stone interior of the castle, some of the walls are 4 metres (13 feet) thick but its been heavily cleaned and renovated and is now used as a backdrop for the museum and as a modern art gallery.

We got to see exhibits on the history of the town and the lake, very much based around boating, fishing and the geology of the region. There was also a small aquarium with lake fish, art from local artists and also an observatory exhibition.

However, the best part of the visit was the exhibit of old furniture made locally in the region. Obviously you aren’t encouraged to touch the exhibits, but the old worn wood with its gorgeous patina was so rich and welcoming.

Lots of old heavy and engraved chests as you might expect, it seems these get handed down for generations and are less likely to be worn and damaged compared to something with heavier everyday use such as a bed or cupboard.

But the best old furniture were the beds. Not the sort of grand royal beds we had seen before, but beds for the normal everyday folk. How normal though we weren’t quite sure. Presumably not peasant beds.

Rustic, unadorned and just practical, one with a cupboard built into the end. All designed to keep the residents warm in the bitterly cold winters up in the hills and altitude of the lakes. Simple but stunning.

And then there was this high back chair which had a very practical drawer in the base and where the back of the chair flipped over to turn it into a table. And this sideboard where the front dropped down to make an occasional table or extra workspace, ideal for the small kitchen. Convertible furniture was a thing even in olden times.

That was it for our visit to Annecy and we can definitely say “Yes, Annecy is a very pretty town!”